I garden in zone 5b, in Eastern Washington, USA.

Starting out front, we have the terraced flowerbeds:
This is the view from across the road.
Both of these pictures were from July 10. 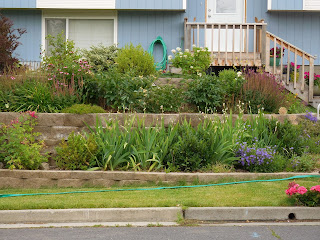 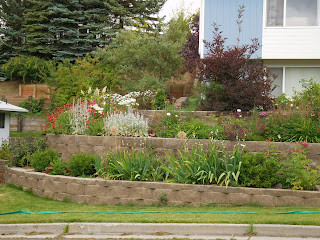 The sod is new from this spring.
We are trying valiantly to keep it alive!

This entire hill used to be junipers and cottoneasters.
I can't even tell you how happy these beds make me during the growing season.
The very top terrace has shrubs with some spring bulbs between them.
Middle terrace is nearly all perennials and spring bulbs, though I usually put in a few annuals here and there as needed. My idea was to keep the top and bottom more simple, so that this middle terrace could be the star of the show.

The bottom terrace has 3 groups of similar plants: evergreen shrub bookends, with irises, lilies, and a few alliums between them. There are also spring bulbs here and there (because you can NEVER have too many spring bulbs!)

I call this the front porch bed, to distinguish it from my other front flowerbeds. 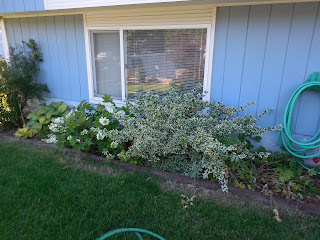 It has undergone a major renovation in the last 2 years.
The shrubs are still small, but they have put on a lot of growth since I planted them.
It holds 3 larger shrubs: a spirea, oakleaf hydrangea, and a euonymous, along with several smaller perennials, including bleeding heart, hostas, and heucheras.

Okay, this is another newer addition:
the east-side terrace 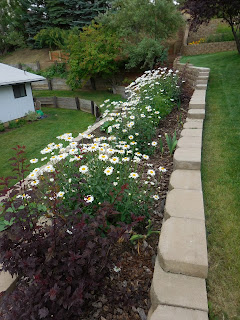 Believe it or not, there are lilac bushes between those daisies!
They were such small, demure little daisy patches when I transplanted them last fall.
Wowzers, they're taking over! 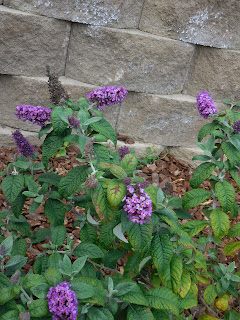 This spring I planted 3 butterfly bushes at the far end of the east-side terrace, along with a pie cherry tree.

Continuing on to the backyard, here is our vegetable garden: 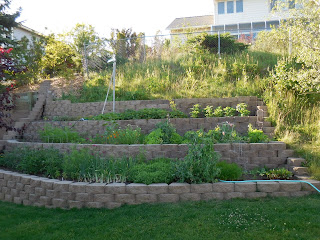 This terraced beauty was several years in the making--it wasn't called the Neverending Wall Project for nothing! The bottom right half has been around the longest, so it has the best soil.
The left side is improving each year.
On the top terrace, I've got a strawberry patch in the middle that is slowly taking over the entire terrace.

And then we have the back slope, otherwise known as The Hill of Death. 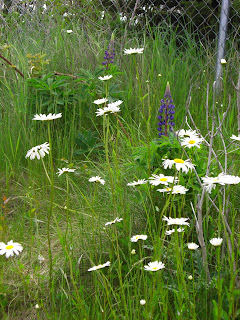 This is about right.
The lupines and daisies are wild, as are the dandelions and clover that also show up.
Not to mention thistles and weedy grass.
So far everything I've tried to plant onto the slope has either died right off, or suffered a lingering death. I'm not sure which is worse.
Spring of 2015 I planted some pink lupines, and crossed my fingers, as that's all that seems to really thrive up there!

Next we have:
the shade bed, located behind the shed, along the top of the wall. 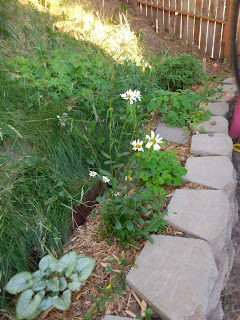 Newly renovated in June of this year.
The brunnera and columbines are holding strong, and the new red-twig dogwood on the far end will be great if it can survive through this summer!

Okay, the very newest flowerbed:
the shed bed....because we just had to have something along that bare wall. 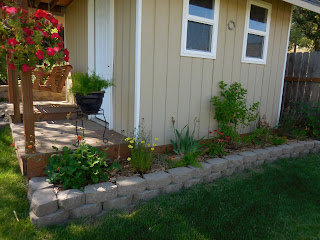 Also, because the wall was only a couple blocks high, which seemed like a piece of cake compared to all the others that have been built.
The shrub in the middle is a 'Little Lime' hydrangea, and it is surrounded by irises, coneflowers, coreopsis, and yarrow. There's an orange geum on the left-hand side, also. I also threw some spring bulbs in there, because basically, I couldn't help myself.

Following that little wall on around, we come to the raspberry patch: 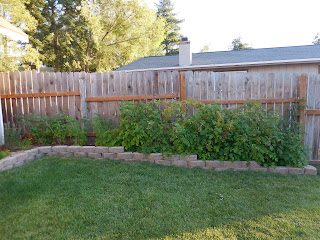 With the addition of the wall and new flowerbed, we extended the raspberry patch all the way to the corner of the shed. I put in 5 or 6 more plants: on the left side are black rapberries, plus 1 'Fall Gold', and on the right, the established berries are all the regular red variety.

Last but not least, the back flowerbed: 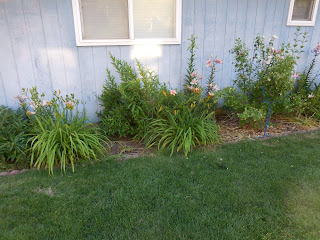 It's right along the back of the house.
This is another bed that was here when we bought the house and has been completely overhauled.
It has an English rose on one end and a ninebark on the other end, with a flowering almond and a mockorange in the middle.
The rest is filled in with perennials and spring bulbs.
It faces south and as such, many of my plants LOVE it here and grow huge!

All that's left is going back down the hill on the west side of the house: 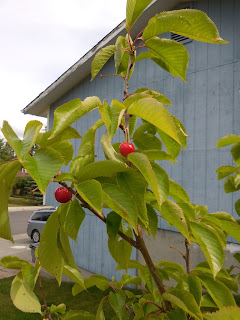 'Stella' cherry tree
After finally finishing the lawn & irrigation project a year ago, we decided we could plant some cherry trees on this side--since the big tractors were done driving up the hill, and all.
After that, you're back at the driveway where we started.

Hope this gives you a little idea of what I'm working playing with!
﻿