I read and liked The Life of Pi some years ago. So I've been wanting to read this one for quite some time (same author.)  This one, well, it was different. Let's talk about it. It really needs discussing. 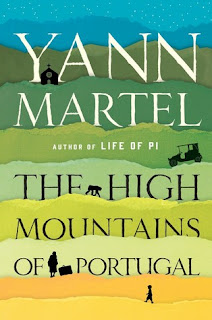 2 stars: This one was a bit strange.

Told in 3 sections, each with different characters in a different time period. The first is the story of Tomas in 1904. He works at a museum in Lisbon, and has come across an old journal that has him transfixed. It is the journal of a priest who carved an utterly unique crucifix, that he sent to an obscure church in--you guessed it--the high mountains of Portugal. Tomas, who has taken to walking backwards ever since losing his lover, son, and father, is determined to find this crucifix. The only trouble is that to do so he must drive a new invention--the automobile. He'll do whatever it takes, though he has no idea the toll this journey will take on him.

The middle section is about a pathologist, who performs autopsies at a large hospital. It is mid-century by now. The pathologist's wife comes to visit him late one night, with the newest Agatha Christie novel (they are both big fans) and some fascinating conversation. Strangely enough, she is not his only visitor that night. The next is also a woman, but there the similarity ends. For one thing, she has brought along the body of her husband in a suitcase for him to autopsy.

Finally, we get the story of a Canadian senator in the 1980's who has lost his wife, but who makes a connection with a chimpanzee. It is such a strong connection, that he ends up buying the animal. One thing leads to another and he ends up moving to the high mountains of Portugal, with the chimpanzee. He searches for his roots (his ancestors came from this village.) He experiences life without modern technology or schedules, and comes to recognize many things about himself and his life.

* * * * *
I kept reading this one, thinking that it would all be tied together at the end. All of these very different stories would suddenly make sense. There was some of that. The connections, though a bit tenuous, did show up, but not in a linear way.

There are some big overarching themes throughout the three sections, that would make great book club fodder, like loss and grief, the importance of intentions vs. reality, the role technology plays or doesn't play in the lives of the three men. Also, chimpanzees, the Iberian rhinoceros, the making of a religious icon, and so on.

The middle section was magical realism. It was my least favorite of the three. I felt like there were perhaps hidden meanings that were sailing over my head. The way it all happened left me unsettled, particularly the end.

I will say this for it--I thought about things that have never before crossed my mind. So there's that.


I truly am eager to discuss this with someone, while at the same time feeling reluctant to recommend it to any of my friends. It's a rather awkward position to be in. Have you read it? Please talk to me!
Posted by Linnae at 7:00 AM