The kids and I went over this morning and cut some flowers for the table. 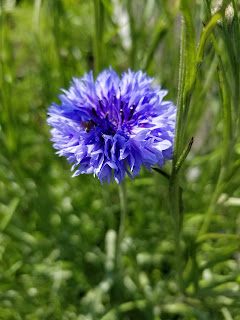 Most are 'Blue Boy,' which I love, but there are a few others here and there--a light purple, a deep pink, and white/purple bicolor. 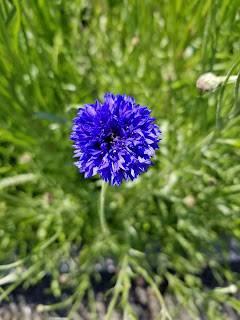 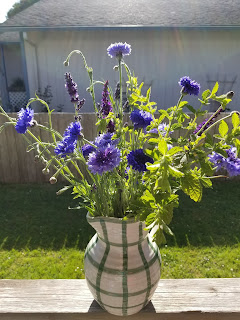 This one was mine.
I put in bachelor's buttons as my main flower, with lemon mint, lavender, and salvia to add depth. 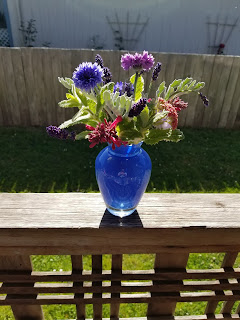 My oldest daughter did this one.
Bachelor's buttons, agastache, yarrow, pineapple mint, and lavender.
It's so good to have flowers for cutting again!
Posted by Linnae at 8:30 PM No comments:

We got the new garden boxes planted!
I just took pictures of the flower box, because the rest were mostly seeds--so they look empty.
I decided to go with tones of peachy pink, raspberry, dark pink, and purple.
All my favorite colors!
After some thought, I did some perennials in this bed. I'm assuming we'll rent the same beds next year.
If not, or if we move, I will have to dig them up and bring them--or give them away to a friend. 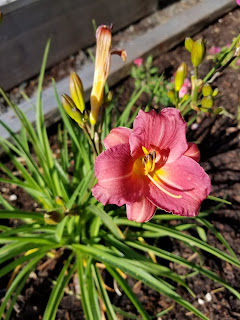 This daylily is in the back left corner, below.
Love it! 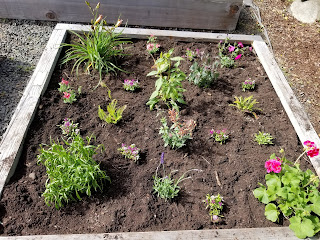 In the middle I put a 'Cheyenne Spirit' coneflower.
You know how much I love those!
Then in the corners I've got the daylily above, Coreopsis Li'l Bang 'Starstruck', a bright pink geranium, and bright pink petunias.
On either side of the coneflower are 2 agastaches: 'Sunrise Orange' and 'Morello.'
I also put in 3 achilleas, all 'Summer Pastels' variety, and one lavender for my youngest daughter 'Hidcote Blue.' I filled in empty spots with Verbena Lascar 'Mango Orange' and alyssum 'Easter Bonnet' mix.
It's going to be so pretty once everything fills in and starts blooming!
In the long skinny bed, the kids planted half beans and half carrots--a mix of colors for each.
The other square box had almost 10 pounds of potatoes hidden under the soil!
After digging those out and refilling with dirt, the kids planted our one zucchini plant in the corner, then they did onions, corn, wheat grass, and bunny tails grass. 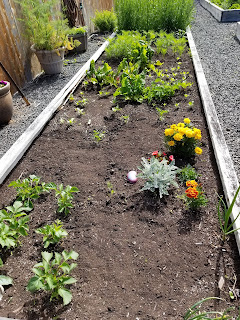 In this box I planted 3 varieties of sunflowers in the big empty spaces you see there.
I pulled out the parsley. The leaves were yellowing and it was going to seed.
I don't remember the names of the sunflowers offhand, and the seed packets are in the garage!
One will be velvety burgundy, one was a mix of colors, and the other....nope, can't remember.
Those are my dahlias there, front left, getting big and bushy! 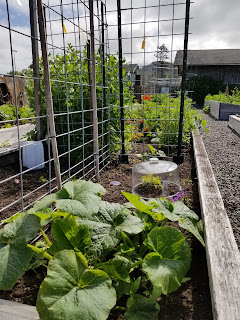 Plus a glimpse of the winter squash with very tall peas back on the left.
Everything has really started to take off these past couple of weeks!
Posted by Linnae at 6:00 PM No comments:

Email ThisBlogThis!Share to TwitterShare to FacebookShare to Pinterest
Labels: perennials 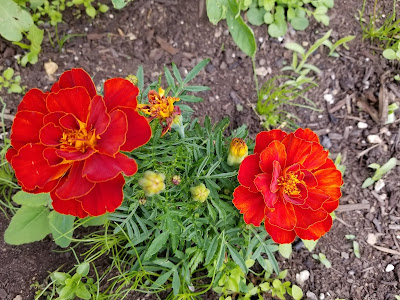 So bright and pretty in the vegetable bed!
Posted by Linnae at 11:02 PM No comments:

Email ThisBlogThis!Share to TwitterShare to FacebookShare to Pinterest
Labels: marigolds 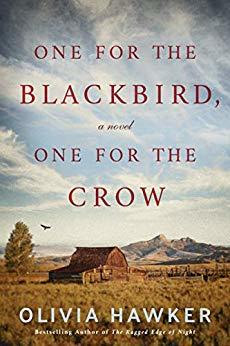 Cora Bemis and Nettie Mae Webber have lived as neighbors for years, out on the Wyoming frontier. Though never friends, per se, they have been decent neighbors. That is, until Cora and Substance Webber have an affair, and Ernest (that would be Cora's husband) fatally shoots Substance.

Now Ernest is in jail, and winter is coming on. Neither household has a man to help with all the farm chores. Nettie Mae's son Clyde and Cora's daughter Beulah, both teenagers, work hard to help get ready for the long months ahead. It's a good thing, too. Nettie Mae is consumed with bitterness and anger, Cora with regret.

It is a bitter pill to swallow when the women realize that they will have to combine their households in order to survive the winter. It takes too much time and energy going back and forth to care for both places. Accordingly, Cora and her 4 children move in with Nettie Mae and Clyde. The animals share a barn, and all must learn to live together.

Over the long winter months, cracks begin to appear in the attitudes of the women toward each other, and in their perceptions of themselves. A new life; a different, more joyful and authentic way of moving through the world awaits, if they can just break through the prison of the past.

I enjoyed this one. It was heavier than what I usually read, but there were quiet moments of wonder tending toward magical realism that brought me out of the heaviness --particularly the chapters from Beulah's point of view. The tone starts out pretty bleak and depressing, but more and more hope is allowed in as the book goes on. Tense and exciting climax, and satisfying ending.

These women are in desperate straits, and they know that. Their very survival depends upon their working together, but how would it be to have to bring your worst enemy into your life so closely? Hawker's answer was compelling and kept me reading to the very end.

Content: Occasional swearing, references to the affair but not graphic descriptions, some thematic stuff--Clyde's burial of his father is written in detail, some butchering of animals. I was so relieved that the relationship between Beulah and Clyde stays innocent throughout. Thank you, Ms. Hawker for that!

We've Got Some Work to Do!

As we've been going about our gardening business, over at the community garden, we have kept an eye on a couple of beds that seemed uncared for.

Finally, we made it in to the desk and asked about them--sure enough, they were unclaimed! So we claimed them. That is, we rented them for the season. 2 square, half-size boxes and 1 long and skinny one.

As you can see, we've got our work cut out for us to get these ready to plant!
The bottom one is post weed removal.
There are some potato plants with flowers on them hiding amongst all those weeds.
Wonder what else we'll find! 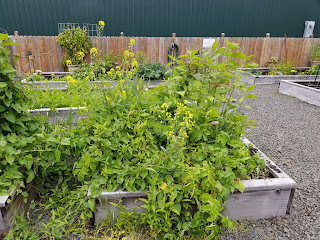 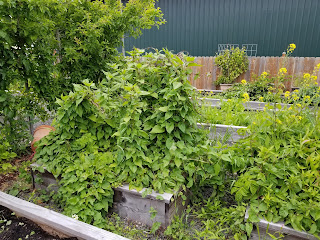 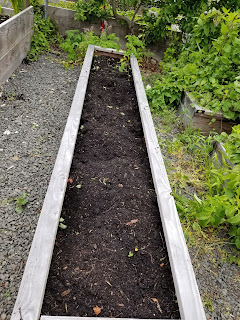 Email ThisBlogThis!Share to TwitterShare to FacebookShare to Pinterest
Labels: weeds

Our garden has really been loving the warmer temperatures we've had the past few days.

The swiss chard is going crazy. We're giving it away in big bunches! We have eaten some, but it is way more than we can keep up with ourselves. Funny, for a crop that we didn't even plant!

The squash is starting to grow big, finally, and the peas are loaded with blossoms!

Tomatoes are hanging in there, but haven't put on much growth yet. Spinach is about done, carrots are getting big enough to harvest soon.

In my flower box, the bachelor's buttons have lots of buds but haven't started opening up yet. Cosmos are getting big and bushy--I will need to thin them soon. Zinnias are up but haven't put on much growth yet, and same with the dahlias. 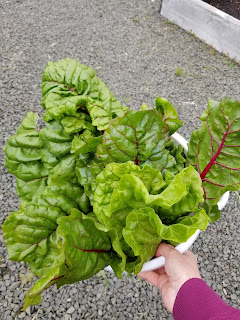 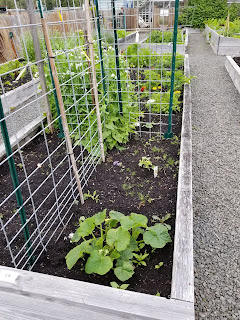 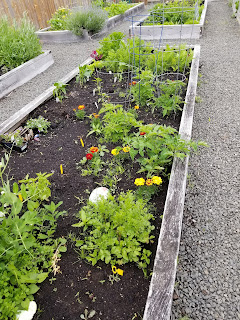 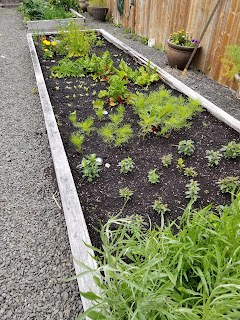 I had kind of been debating if I was even going to fill these big flowerpots this year, but in the end, I decided to do it. I did check with our landlord first, to make sure he would be okay with where I wanted to put them. We have the 2 tall plant stands, so that works well for their new position by the mailbox. 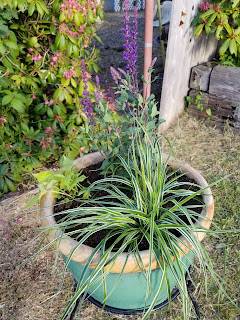 This one has Japanese forest grass, sweet potato vine, and salvia. 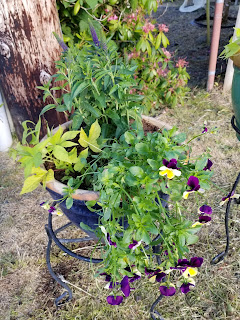 In the smaller pot, we planted violas, veronica, and sweet potato vine. (The 3 v's.)
I'm glad I went to the effort after all. It has brightened my day to see these pretty flowers whenever I pull into our driveway.
Meanwhile, over at the community gardens, there are planters and pots lining the edges of the garden.
These are all supposed to be free for harvesting for anyone with a garden box rented.
They are a total mess! Full of weeds and half-dead plants, every one of them!
So we decided to help out a little bit with that situation.
There are 4 pots in particular right next to our beds.
We emptied out 3 of them completely, and refilled with dirt (provided.)
The fourth has an enormous fennel plant in it, and my kids want to harvest some fennel seeds, apparently. So we are letting that one go to seed, but then later we will yank it out and probably replant it--maybe with some spring or summer blooming bulbs.
Anyway, in the first one we planted 3 kinds of mint: pineapple mint, spearmint, and orange mint.
The second one we filled with flowers--mostly petunias, with an African daisy and sweet potato vine to round things out.
The third had some chives planted in it that flowered this spring, but when I looked closer, some of them were still in 2" pots sitting on the surface, and there were dead plants and weeds galore.
For this one I did petunias and verbena in pink and peach tones, and replanted the chives in the middle.
There is a 5th pot that someone else weeded out then just left empty for a month.
I didn't want to take over if they had plans, but after a month I figured it was up for grabs.
We had a big bunch of volunteer calendula coming up in our vegetable box that were starting to crowd out our tomatoes, so we dug those up and plopped them into the pot.
They are bright orange and yellow and quite cheerful-looking over in the pot.
Recovered very nicely from the transplant. 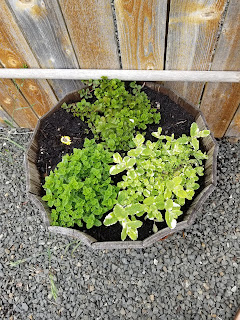 Planter 1: all the mints. 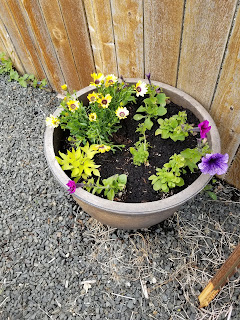 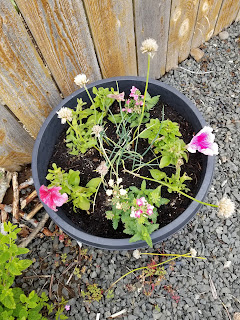 Planter 3: petunias, verbena, and chives
There are several more to go.
I'm kind of working my way around the perimeter.
There are two big planters with grapes in them.
The one just needs to be filled up with fresh soil--it's only about halfway full and you can see some of the roots poking out. The other is chock full of weeds.
I have been watering all the pots that we have planted, and the grapes, at the same time we water our beds. (I really want to harvest some grapes this year! That would be awesome!)
I guess I feel a bit protective of them now.
We don't mind a bit if everyone else harvests the mint.
For the others, even though they're not really harvestable, I figured flowers were at least better than weeds. Maybe they'll increase the pollinators in the garden.
Posted by Linnae at 10:35 PM No comments: