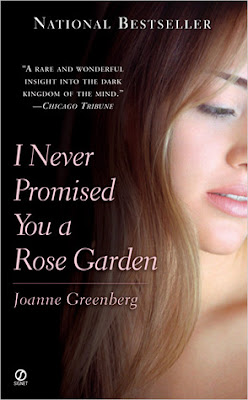 Deborah Blau is severely mentally ill, in a time before mental illness was truly recognized or able to be treated effectively. Her desperate parents take her to an asylum, but they can hardly stand to leave her there. Nevertheless they do, and her treatment begins.

Most of the book is from Deborah's perspective, living in the asylum and meeting with her doctor. There are occasional glimpses from the doctor's perspective, her parents', and even her little sister's. With the help of her doctor, Deborah claws her way back to reality, from the fictional world she has built for herself inside her mind. It is not pretty or linear, but slowly, healing begins.

I was struck by a couple of things in particular: the insistence on telling the absolute truth to those suffering with mental illness. This was mentioned several times throughout the book. Deborah felt such a relief when the doctor told her that she was very sick. Finally! Deborah knew she had problems her whole life, but had constantly been told she was fine--i.e., lied to. It was so validating to her for her doctor to acknowledge her illness. Complete honesty also helped later on, when Deborah was closer to coming back to the real world. This is where the title comes in--it's a quote from the doctor to Deborah. Being cured or achieving mental health is not all happy and easy.

Another thing was the difference in treatment between then and now. At least from this book, it seems back then there were many physical treaments used--from shock therapy, to isolation, to the wet bedsheet treatment, but the only medication available were the sedatives. They of course, also had talk therapy as well. Now there are medications specific to the illness--I don't know how effective they are, but hopefully at least it's another tool that can help.

Finally, her descriptions of looking out on those in the "normal" world were poignant. Just the feeling of otherness, and bewilderment. How do they manage day to day? They make it look so easy, when everything to her was such a big struggle. I've heard addicts say the same thing, when they're in the midst of their addiction.

Along with that, Deborah's feeling of being invisible, even though she joined the church choir and another group--that no-one spoke to her or even seemed to see her, once she was trying to become a part of society again. So different from the top floor of the asylum, where she didn't have to pretend to be someone she wasn't, and she was seen for who she was.

Content: For adults. Quite a bit of language, including some crude sexual references. Self harm and violence.