I am very happy to tell you that the greenhouse is finished!! 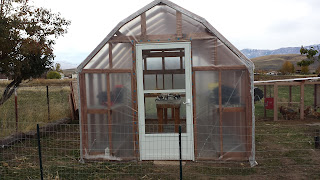 Okay, okay, it's been a couple of months now.
We were going to do actually glass or PVC something or other, but then looking up more information, we realized that 90% of the farmers we saw just used the 6 mil. plastic sheeting.
It's not nearly as durable as glass, but apparently does a pretty comparable job when it comes to heating the place in the sun.

Also it's WAY cheaper! A couple hundred dollars vs. thousands.
So even if we end up having to replace it as some point, it will still be much cheaper. 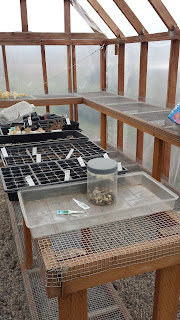 On the inside are these shelves made of hardware cloth, so the dirt can drop through (and water).
The floor is gravel/pebbles. 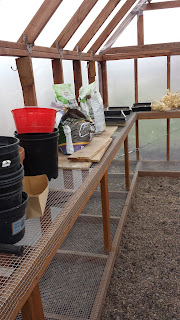 I haven't had much growing in here yet, since it was finished right at the end of the growing season.
However, I have spent some very pleasant hours, potting, dividing, and re-potting various plants and houseplants, including the amaryllis I'm selling right now.

When it's 40 degrees outside, it's probably in the 60's inside the greenhouse, as long as the sun is shining! I need to get an actual thermometer for it. Anyway--coat weather outside = sweatshirt weather inside. I love it! 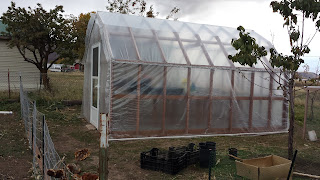 Another advantage to using the plastic: the long sides can roll up.
The white you see along the bottom is a plastic pipe holding that side down.
To get a breeze, you just pop out the pipe, roll up the plastic, then hang it on some handy little hooks just under the roof.

I am so excited to have this space to grow in next year!
I've already got plans to put my crates in there as soon as new growth starts popping through, so the deer don't get the tulips and lilies. I'll probably line the bottom shelves with them.

I also plan to get my dahlias started early, and get the seed starting in full swing!

It is unheated, so as long as we're still freezing at night, I may have to add extra protection out there for anything that shouldn't freeze.

I'm sure I have a lot to learn about greenhouse propagation.
Bring it on!

Email ThisBlogThis!Share to TwitterShare to FacebookShare to Pinterest
Labels: greenhouse