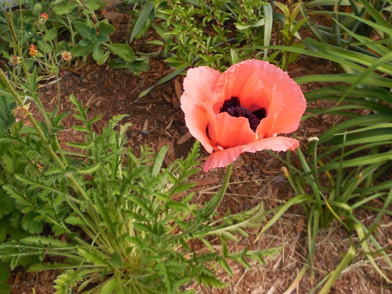 This one grew in my Washington garden.

I’m actually a little surprised that I got this done this week! Monday and Tuesday were beautiful early spring days—mid-40’s, sunny, dry (dead) grass to walk on. Perfect! I decided where I wanted to plant my poppies and got the ground weeded, raked, big rocks removed. My plan was to then sow the seeds Wednesday. Then it snowed Wednesday. And again Thursday. Oh yep, also Friday. Friday was more sleeting—what they like to call a “wintery mix.” Blah! Woke up this morning to more snow on the ground. Another inch or two. Sigh. Looked like my plans of poppy planting were getting pushed to next week.

This afternoon, the whole story changed! The snow all melted off. The sun came out. It was once again, a beautiful early-spring day. Well, you’d better believe I got my mud boots on and got out there! 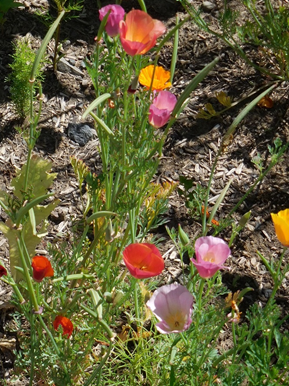 California poppies are actually their own species. I planted 2 varieties in my poppy row anyway!

I have never had great success growing poppies from seed. Then recently I learned from the incomparable Lisa Ziegler that poppies are COOL flowers. That means, friends, that all those seed packets I had telling me to wait to sow them until after the last frost were wrong! They like it cool to cold, as a matter of fact. Other experienced gardeners have since told me that they sow their poppy seeds anytime from February on—just as soon as the snow melts and bare ground appears, get them in! In fact, one intrepid gardener in Chicago tosses his seeds onto the snow—with a warning that they will move a couple of feet with the snow melt! 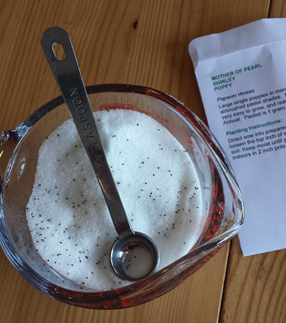 I went a little crazy buying poppy seeds this year, so I had quite a few to get in. Oh, the other tip I learned was to mix the seed with sand or sugar, since they’re so tiny and grow to be so large. The ratio I did was 1/4 tsp to 3/4 C. sugar—or so. Once they grow I will thin them out to be spaced 9-12” apart. I put them in 2 long rows about 6 inches apart, at the one end of my garden area. 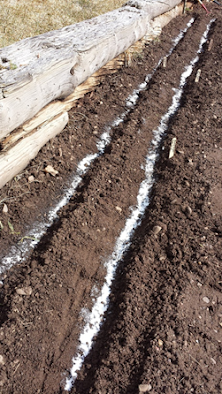 I let the chickens out after I had them sown and I was a little worried they would be curious about the white stuff on the ground and go scratch it up! They didn’t even seem to notice it. Are chickens color blind? Hmm…a post for another day, perhaps.

So, when it comes to cut flowers, poppies are notoriously short-lived in the vase. You can get a little more vase life out of them by searing the stems soon after cutting—either with a flame or in boiling water for 7-10 seconds. Even so, you’re looking at 3-5 days, probably, tops. So, that makes them great for event work, where they really only have to look pretty for the one day, or just to enjoy on your table. 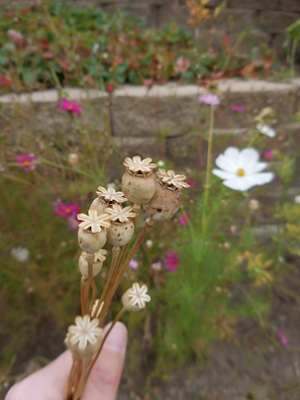 Aren’t they pretty? These are dried, but they are just as beautiful when they’re green.

I’m just as excited about the seed pods, actually. I love the way they look! I’m planning to use them in boutonniers and arrangements. The seed pods last a long time in the vase, as you might imagine!

One more poppy picture from my Washington garden. 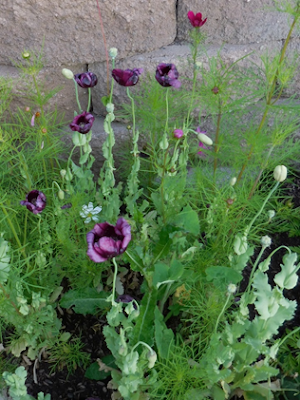