As I have been preparing to plant a bunch more seeds this week, I really felt like a kid making mud pies all over again! My greenhouse has an entire corner devoted to bags of different types of soil and soil amendments, and the various things I was doing required different soil for each. I was [roughly] measuring, and mixing, and adding water and mixing some more. It was fun!

So, would you like a Grownup Mud Pie Recipe?

I decided this year that I want to be done buying potting soil. Right now it’s at least $10-12 PER BAG. Friends, that’s highway robbery! I use enough of it that I just can’t be paying that much.

FUN FACT: Potting soil contains ZERO actual soil! Did I just blow your mind? This is why you can’t just go out to your garden and get a nice big shovel-full of soil and expect your container grown plants to be happy.

This is a very basic version:

optional: a little bit of fertilizer

Mix well, until all components are uniformly distributed. 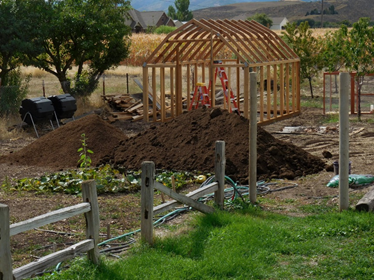 That’s a whole lotta “aged steer manure” for the garden, plus compost. This was from fall, 2 years ago. Lovely, lovely dirt! Also, our greenhouse was still under construction, as you can see!

This is the recipe I used yesterday to fill up my bins where I planted anemones. I didn’t add any extra fertilizer, because the peat moss I was using had some in it already. So, the separate components are a bit more expensive to buy, but you can then use them to make so much more potting soil then you would get in your 64 quart bag! That bag of vermiculite is huge and has lasted me almost a year.

I think the peat moss is really the most expensive part, but I can buy that as I need it. It doubles in volume once you pour it out, as well.

I have a couple of big black plastic bins from Lowe’s—I think they were originally for mixing concrete maybe. Anyway, they have worked great for my mud pies!

The other recipe I made yesterday was for my soil blocks. Are you familiar with that method of seed starting? I am certainly no expert, but I’ve decided to do it on as much as I can this year. It saves a ton of space, and you don’t have a bunch of plastic containers to store, clean, and get in the way. Plus, the plants are supposed to do much better—grow more quickly and have less transplant shock when you put them out into the garden.

Here’s a link to the soil recipe I used for that: Homemade Blocking Mix Recipe.

To learn more about soil-blocking, here you go.

These links are both from Lisa Ziegler’s website. She’s a flower farmer back East and one of my mentors—even though we’ve never met! I’ve read her books and taken an online course from her. I feel like I know her, let me just put it that way! She doesn’t know me at all, though. ;) Such is life.

Here’s a website I found that includes specific recipes for 6 different types of homemade potting mixes. I saved it on my computer! I love it when other people figure things out so I don’t have to do it!

By the time I was done yesterday, I was covered with a fine coating of dirt. It was a good day! 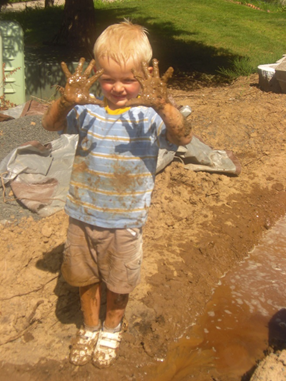 I was slightly less dirty than this! [My oldest back in the day—ultimate mud pies!]