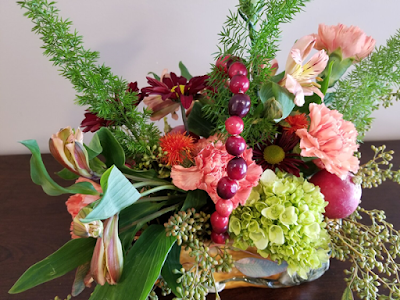 A fun Thanksgiving centerpiece I did for one of the BNI group.

Over the past year, I have attended a business networking group that meets here in my town once a week, called BNI—stands for Business Network International. The first time I went as a guest. I was impressed by the camaraderie amongst all the regular attendees, and their friendliness to me.

Since then I have gone several times (8 or 9?) as a substitute for one of the regular members. Every time it has been the same experience: a room full of positive, supportive people, who enjoy being around each other. More than that, people who have built up relationships of trust, such that they feel good about giving each other referrals. That’s the point of it, after all. To help businesses grow. Yes, to make money.

However, the way they go about this goal is different than the norm. Their philosophy is “Givers Gain.” I don’t know how other chapters implement the philosophy in their groups, but the group I have been to really means it. They’re more interested in helping you be successful with your business, than they are in their own. They seem to rest assured that what goes around comes around, and helping you will end up being good for them too, in the long run.

I wanted to join right away, but there were a few things standing in my way. First and foremost—the cost. It’s not cheap to join, and when I first attended, I was just into my 2nd year of business. The cost to join was just a few hundred dollars shy of what I had made my entire first year. Granted, I didn’t make a lot (less than zero when expenses were added in), but I didn’t feel like I could make that leap just yet.

Another obstacle: I hadn’t really decided yet which direction I wanted to take my business in. Would I do weddings? If so, one wedding referral would pay back my membership fee. Was I going to primarily do everyday flowers? That would take a whole lot more to make up the difference. I have spent quite a bit of time over this 2nd year, pondering about those questions and figuring out what I want to focus on, and what direction I will be headed.

It’s also quite a time commitment—weekly meetings, some training, and one-to-ones—which are meetings set up individually with the other business owners in the group. How I would I fit that in to my existing schedule?

A final obstacle has been the uncertainty of our family plans. There is a job change coming in the future for my husband, and we weren’t even sure we would be around next year. I didn’t want to join up, pay the money, only to have to abandon the group halfway through the year.

Well, after talking with husband about it last week (I’ve attended twice this month as a substitute), I’ve decided it’s time to join. The investment still seems big and a little scary. It’s going to be a leap of faith, for sure. But, I also feel ready for this. I’m ready for where this will take me. With my husband’s support I can make the scheduling work.

I’m excited to be part of such a positive, supportive group! I will pick up my application on Thursday and go from there!