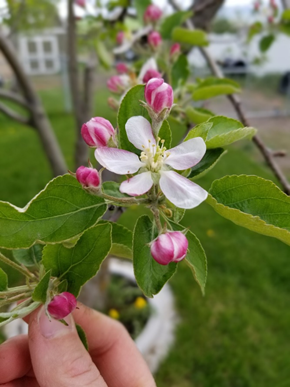 Just delivered week 3 of my Spring Subscriptions. One more week to go! This has been such a fantastic experience—I am loving it! It makes me so happy to share my flowers with people who appreciate them and are excited to receive them every week. It makes me very tuned in to what is blooming each and every week, as well, and where I have gaps to fill. Just for my own note-taking, it’s time I make a list of what I have had blooming each week so far, along with ideas for filling in more of those gaps.

I’m going to list the date from each Thursday, as that’s when I have been and will be cutting blooms for subscriptions. I put in all caps what I had the most of in a given week.

April 9: Earliest daffodils (too small to harvest for subs)

April 30: Early tulips, fully open. (Would need to harvest earlier if to be used for subs/cuts—so maybe 4-23?). Still daffodils, hyacinths, and also grape hyacinths. Camassia? (Picked some week of 5-14, but most were done by then.)

** May 7: TULIPS—mid singles (all my orange, red, and yellows,) and early doubles (my purples). Lilac buds—just swelling and turning a pretty purple color. Last of the daffodils.

May 21: PERENNIAL BACHELOR’S BUTTONS. (Harvested 1 bucket, could have cut 5 or 6 more buckets full.) ALLIUMS (these were the big purples, most of the smaller haven’t quite bloomed yet but have buds.) Ornamental plum foliage (blossoms all dropping,) ninebark foliage. 1 early iris blooming (not enough for subs.) Catmint—too short for subs. (I planted ‘Junior Walker’ to fit into the allotted space better, but if I plant the regular ‘Walker’s Low’ next time, I’ll bet they would be long enough to cut.)

Speculation for next week: (May 28): Bearded irises—they all have buds. More perennial bachelor’s buttons. Hoping for wintered-over annual BB’s to start up production. Right now have 2 blooms open on those. Possibly the smaller white alliums, although their stems are still so short! Will try pulling them, like tulips, and see if that gives me long enough for subs. 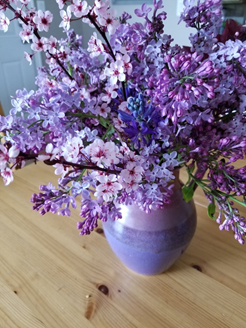 A couple of thoughts:

Maybe next year I should offer a 4-week Spring Flower Subscription from the last Friday in April to the week after Mother’s Day, then give myself a break during this gap. I’m really hoping my irises will come through for me next week, but I’m going to be combing through the rest to find stuff to put with them. I may have to purchase from a fellow farmer to fill out the bouquets.

All of my peonies have many buds on them (!) but the only ones that even stand a chance of being ready for next week’s subscriptions are the Coral Charm out front.

Flowers I need to plant more of to fill in this gap are: bearded irises, alliums, and flowering shrubs. I have leaned pretty heavily on my flowering trees and shrubs for filler during these early times. I haven’t cut any of the fruit tree branches to put in, although I would consider it if we had several trees.

I also want to try again at growing anemones and ranunculus next year, in hopes of them filling in this mid-May gap.

My cool flowers have pretty much just sat in their rows and done nothing for the past 6 weeks. I need to figure out what’s going on with them, because I think they should be blooming right now to help fill in as well. At least some of them should be. That’s the point of planting them in April, isn’t it? So I’ll be very interested to see when they actually start blooming. They are getting bigger and finally look like they’re growing, but no flowers yet. I think those really hard freezes mid-April may have set them back quite a bit.

Also, when are my hundreds of Dutch irises going to bloom? Seriously! I was counting on them to help a sister out right about now, but I don’t even see buds on them yet. Maybe they’re waiting for an invitation.

p.s. We are heading out of town in a week. If my peonies and Dutch irises all bloom while we’re gone I will be fit to be tied!