This apple tree on the side of our house really needed some pruning.
Since we've had a couple of days this week with warmer afternoons, it was perfect timing.
You want to do it while the tree is still dormant, so before buds or leaves start to open up.

I may have mentioned it before, but I really enjoy pruning.
I just think it's fun and satisfying.

I have never pruned an apple tree before, so I watched a whole bunch of videos on YouTube, and now I am an expert.
Also, I hope my tree survives! Ha!

So, here's what it looked like when I started: 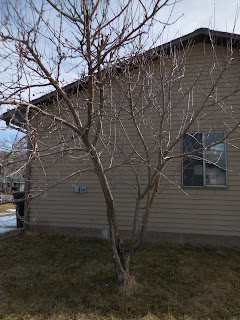 It's got branches going every which way.
Last year, there were quite a few apples on the tree, but they were all very small, and none of them really got ripe.

So, your main objective with pruning fruit trees is letting light down into the middle of the tree.
Your fruit will ripen, be bigger, and taste better if it has sufficient light.

First things first on any pruning job: the 3 D's.
Take out any Dead, Damaged, or Diseased branches. 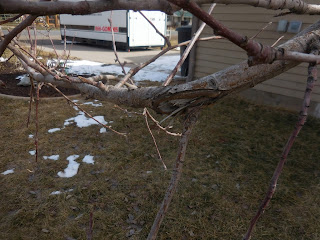 Exhibit A: Can you see the damage on this limb?
I cut it off just above the branch coming off in the healthy part.

For fruit trees, you also want to take out any that are growing towards the middle of the tree, or crossing through the middle. There was a fairly decent sized branch doing that. It got chopped.

You also want to take out any that are growing straight up (you won't get fruit off those--they are water sprouts, which just take energy from the tree with nothing to show for it), or straight down.
The one video I watched called them "hanger-downers." Those ones won't give you much fruit, either.

Take out any that are crossing other branches, because over time they will rub off bark, which will allow infection or bugs to set in.
Along those lines, for fruit trees, if there is one branch directly over another shading it out, choose one to chop. 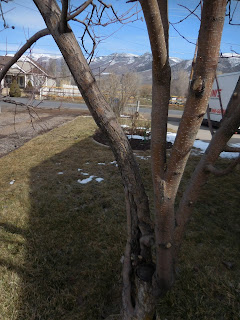 Branches with acute angles should usually be taken off as well.
Here's one that bugged me really bad.
Do you see the "v" formed by those two branches?
I ended up leaving them, since I didn't have very many bigger branches on that side of the tree.
I may chop the right one off next year, though. 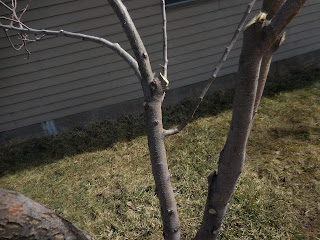 When you chop off a branch, leave a little nub so the collar of the branch stays intact. 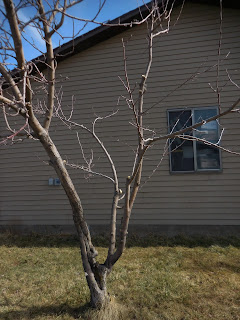 This looks really bare now, but I'm confident it will fill in.
Winter pruning stimulates growth, so this tree should put on a lot of growth this spring! 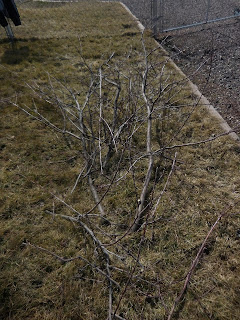 It left us with a decent sized pile of firewood and kindling, plus a couple of nice walking sticks. :)
Next I need to prune the younger apple tree in the orchard.
That should be fun, too.