By the way, I do have more gardening posts coming. I've been dying to get out and do more work outside, but we've had crazy weather over the past week! It has snowed several times and been clear and cold the other days. Hey, on the one nice day last week, I did help a friend weed her flowerbed. It was good for the soul, I tell you!

So. This book. After putting it off for a long time, I finally sat down and read this one! I knew it would not be an easy read and I was right. This is one that begs for discussion. In fact, I think discussion should be mandatory for any kids reading it, just to help them process what happens. 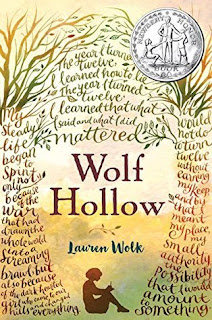 Annabelle's life is just kind of going along, as the oldest of 3. Her little brothers, Henry and James, pretty much do their own thing, though she watches out for them in the schoolyard. Their neighborhood has its share of people who are different. Among them, is a man named Toby, who lives by himself in a shack in the woods. He's a WWI vet and isn't quite right in the head. At least, that's the general consensus. Though he doesn't say much ever, and is out in all weathers on his own, Anabelle's family has given him food from time to time and he has never harmed anyone. In fact, they discovered that he had a gift for photography and since then their family's camera has been on permanent loan to him.

Then Betty Glengarry comes to town. She immediately singles out Annabelle as the object of her bullying. At first, it's nothing too bad--threats to hurt Annabelle if she doesn't bring Betty something. Annabelle smashes her piggy bank, but decides that she's not giving any more than the few precious coins inside.

However, when Annabelle stands up to her, Betty gives her a bruise "the size of a cucumber" on her upper thigh, beating her with a stick. Then Betty falls in with an older student named Andy, who has always been a troublemaker. The two of them skip school or spend the whole time whispering together.

Things start to get out of hand when Betty begins to threaten Annabelle by saying she will hurt Henry and James if Annabelle doesn't give her what she wants. The kids all walk home from the one-room schoolhouse, leaving ample opportunity for such threats to be carried out. It's a constant worry for Annabelle, but she's not sure what it will take to stop Betty.

Then there's the day of the rock. Ruth, one of Annabelle's close friends and classmates is hit by a rock--possibly intended for the German fruit seller who has pulled up to the school. In any case, Ruth is seriously injured. No-one knows who threw the rock.

Betty starts rumors going around that it was Toby. She offers convincing evidence--she says she saw him to do it from the belfry of the school, where she was skipping class with Andy. Her accusations stir up a hornet's nest of trouble in the small community. Then Betty goes missing. So does Toby. This does not look good for anyone.

Annabelle, who may know more than anyone else about the truth of things, is the only one who's going to be able to put things right again. What can she do, though? She's just a kid.

* * * * *
A story about bullying and kindness; about insiders and outsiders; about good and evil. I think every kid who reads this book will relate on some level. We have all been bullied to various degrees. We have all seen others be picked on. Senseless acts of violence have affected us all, directly or indirectly. On the other side, we have all given or received kindness as well. We have seen those who needed our kindness, whether or not we've stepped up to give it.

There was a growing tension in the story, as the violence escalated, and as Annabelle saw the path before her would require courage and probably some sacrifice of her own well-being.

You know, I didn't know what to make of Betty. We never really got her backstory. I wish we had. Rather, she was painted as this one-dimensional Bringer of All the Bad Things to Annabelle's peaceful life. And the thing this kid does--I mean really, a sharpened wire? How is she still roaming around in free society?

I was glad Annabelle did talk to her parents eventually and that they were all a part of the solutions--the temporary and the attempt at more permanent ones. It's the kind of story I read with a pit in my stomach the entire time, as I wondered what other awfulness was coming around the bend.

Annabelle's friendship with Toby was a bright spot. The way she got him to open up a little and participate in some things brought a ray of hope to a dark time. She was very mature for 12. At one point as Toby was telling her some things about the war, she listened, but realized she had no way to process it all yet, so sort of packed it away in her mind until she could truly understand it and deal with it at some point.

The ending was tragic but true to life, unfortunately. Wolk did a masterful job portraying Annabelle's mixed emotions when she realized where Betty must be. Did Betty deserve what happened to her because of her previous actions? Do any of us deserve what we get, good or bad?

I'm having a hard time pinning down the age for this one. The ages of the characters would make it seem to be written for middle graders, but the themes and situations are better suited to teens or even adults. This is one that would be a good one for an adult book club. A quick read, but depths and layers to explore.