A Little Magic, and a Bit of Mystery

I have fallen far, far behind on my book reviewing. These two are from last year (!), so it is high time I got them posted and sent out into the world. :)  Not that I've stopped reading--on the contrary. So here's to getting caught up, little by little. 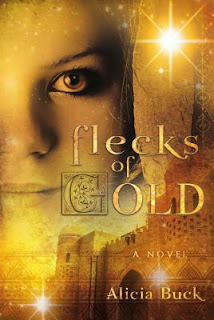 Flecks of Gold, by Alicia Buck

3 stars: Modern teenage girl has adventures and falls in love, in a faraway magical land.

Mary Margaret has always been more responsible than her mother, so when yet another relationship goes bad for her, Mary is the one who gets them moved to a new town for a fresh start. Things are going okay, until Mary meets a mysterious boy named Kelson at school. He seems to make her mind go numb. Though she's never been one to flirt or hang out with the boys much (her mother's relationship choices having a lot to do with that), it's a mighty struggle to say no to Kelson's advances. Then things really get weird.

Kelson kidnaps Mary's mom and takes her...somewhere. They vanish in a big flash of light. So, something else you should know about Mary is that she's always seen flashes of gold in her peripheral vision. Sometimes patterns flash into her mind.. When Kelson and her mom disappear, Mary notices a new, complicated gold pattern flash into her mind. She does her best to reconstruct in her mind, giving it a mental twist at the end as she saw him do.

This bit of magic transports her to the world of Iberloah, and straight into a chicken coop. In a few short hours, she has learned all kinds of new things about herself and this different world she is now on (in?). It won't be enough to rescue her mother, but it's enough to start on her journey in that direction.

Along the way she meets a man who becomes her travelling companion: Breeohan. One or both of them is being targeted by assassins, so that keeps things interesting. Her journey will take her to the heart of the kingdom and surprisingly, solve some of the mysteries of her own past.

* * * * *
There were a lot of things I liked about this one. The pattern magic, with different colors signifying different things, was interesting and consistent. Mary's growing relationship with Breeohan was well done, with lots of teasing and lighter moments to balance some of the action.

The plot lost much of its momentum once she reached the castle. There were meetings and political maneuvering, and even a ball or two. Some development of the love triangle. She eventually got back on the road to find her mother, but here again, the action seemed stuck on slow. She and her little band of supporters would make a small amount of progress, argue about what to do next, do what she wanted in the end, get into trouble, get back out, repeat, repeat, repeat.

I have a hard time with these feisty independent heroines, who make impulsive, stupid decisions--which put themselves and everyone who cares about them in danger. It just bothers me. Why can't we have the independence with some rational planning, rather than "Who cares what you say (even though you know more than me about every aspect of this plan?) I'm going to do what I think is best. See ya!" Arg. It's frustrating. This one was a teenager, so that made me tolerate it a little more.

I liked the ending.

Despite the issues I mentioned, I enjoyed it for the most part. I would read a sequel, if one came out. 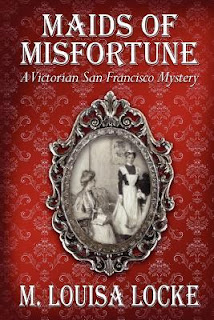 It's 1879, and Annie Fuller is a widow during a time when women don't get much say about anything in their lives. She runs a boardinghouse to make ends meet and also runs a profitable side business as clairvoyant Madam Sibyl. She wears a disguise for her appointments as Madam Sibyl. After all a respectable woman would never be seen associating with someone like that. Her social standing is already precarious enough as it is. She doesn't need to add scandal or rumor to that.

When she receives a threatening letter from one of her late husband's creditors, an odious man who has his eye on the boardinghouse property, she is not sure how she's going to pay him off. Then one of her favorite clients dies--Mr. Matthew Voss. The police are calling it a suicide, but as he was a regular customer and Madam Sibyl was privy to many of his business and private plans, she doesn't believe it. She is fairly certain he was murdered. Why, though, and who would do such a thing?

She aims to look into it. Then Nate Dawson comes along, the Voss family attorney, and he has a few things on his agenda as well. Neither Annie Fuller nor Madam Sibyl were who he expected them to be and yet he finds himself drawn to Mrs. Fuller even as they face-off.

* * * * *
This one was just okay for me, which was a disappointment, because based on the setting I was hoping to really like it. The sparring between Annie and Nate never really captured me. The mystery was fine, but didn't stand out.