Hello friends! I ran across this series again while unpacking our books, (yes! we're finally back in our house after the fire!)  It had been quite awhile since I had read it, so I gave it a re-read, and was once again happy I did.

If you like intense thrillers, keep looking! You will probably be bored stiff with these. On the other hand, if you enjoy a good cozy mystery with some memorable characters, you will probably like this series just fine.

If you give them a try, let me know! 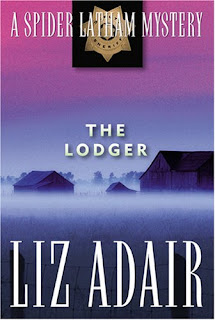 Spider Latham is deputy sheriff in sparsely populated Lincoln County, Nevada. That is, until the sheriff dies in a car crash. Spider takes the new job. Unfortunately for him, there is no training other than a big handbook of rules (budget cuts), and even worse, with just a couple of days of sheriffing under his belt, a dead body is found. Of course, it is now up to Spider to figure out the mystery--who was she, who killed her, and why. In the meantime, the local mortuary refuses to take the remains, so Spider and his wife have to secure them in their barn under less than ideal circumstances (hence the title.)

I really liked meeting Spider and the other characters in this book. He's a man that gets things done--even difficult, dirty, or disgusting things. Without fanfare or fuss, he gets it done.

There were many commenters on Goodreads who felt the plot was too slow for a mystery, but I didn't mind it. It was a more character-driven novel than mystery-driven. Not a thriller. It was as much about enjoying the workings of this small town and its sheriff as it was about catching the killer.

I liked the portrayal of Mormonism in it. The characters were Mormon, most of them, and they definitely all had their flaws. Spider was struggling a bit--I wouldn't go so far as to call it a crisis of faith, but just struggling with what he perceived as an injustice. He was released as a bishop soon after losing his job, and as he looked around, it seemed related. Again, other commenters have said he seemed very critical and judgmental of others. I don't know. To me, it was a flaw, but it made him seem more real. He was trying to do better and be better.

I also liked that he and his wife had discussions about faith and grace and other gospel related topics. I didn't feel like it overwhelmed the story or became too heavy. Since Spider's spiritual journey was also part of the story, as mentioned, I didn't feel that it took away from the plot. Rather, it was showing what he did or learned to resolve his concerns.

Anyway, really liked it. This was actually the 2nd or 3rd time I've read it. It had been long enough that I didn't remember most of it, so that was good. 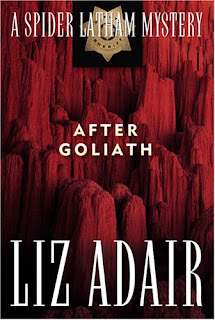 What happens when a murder has been committed, and the murderer has confessed, but you don't believe the confession? Well, you do what you can to get to the bottom of it and find the truth. At least, you do if you're Spider Latham, sheriff of Lincoln County. It being a small county and all, he knows all of the characters involved in this little drama--some better than others, of course--but all of them either by long acquaintance or by reputation. That may stand in the way of finding the truth, though.

While he's trying to sort out the mystery, Spider also has some personal things to work through. His mother, who has dementia, has come to live with them. Some days she is very sharp and other days; other times, not so much. She is not his only house guest at the moment either. The widow of the murder victim and her children no longer have a place to live, so they have come to stay temporarily as well, until they figure out other plans.

So, to say that things have suddenly gotten more complex is putting it mildly. Not only that, as Spider continues to investigate, someone seems out to get him. He and a friend are run off a precipitous mountain canyon road by someone taking shots at them from behind (while driving very fast). Other incidents have come up as well.

It's going to take all of Spider's ingenuity, home-town connections, and no-nonsense reasoning to figure this thing out.

* * * * *
This one was a bit different in tone than the first. I would say leaning more to the exciting side. I still really enjoyed the way Adair develops Spider's character and personal life, along with the mystery itself. He's got all this stuff going on at home to deal with--just like most people do. We may not all have the same stuff, but we've all got difficulties we're dealing with on multiple fronts. I could relate to that part of it.

The jailbreak was a hoot.

I also enjoyed seeing more of his relationship with his wife. The longer I'm married, the more interesting it is to me to see how other couples make things work.


Content: This one was bit more graphic than the first. More blood and guts. Still appropriate for teens, though I'm not sure they would find it as interesting as adults. 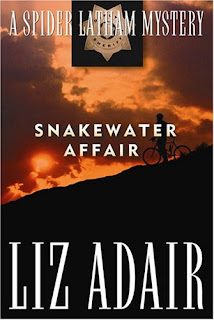 
Though he's a county sheriff, not a PI, Spider is called in by the CEO of a big company to find his missing son-in-law. The missing man had gone up to inspect one of the company's mines at Snakewater and never returned. The CEO expects foul play was involved.

Somewhat reluctantly, Spider takes the case as a side job, without making any promises. He heads up to the mine and begins to poke around a bit. As he does, he uncovers some more things that just don't add up--including the company books for toxic waste removal.

While he's investigating, he's also worrying about and trying to re-establish a connection with his son Bobby, who has left the (Mormon) church. Back at home, his mother's dementia is getting worse and his wife is having to deal with it on her own, since he's gone.

Spider never wanted to get involved with this mess in the first place, but now that he is, he's determined to see it through to the bitter end--whatever that may be.

* * * * *
I guess only so many dead bodies can show up in one small county over a period of a year. :) So Spider had to go off to another place to find his mystery this time. This one was good, but I didn't enjoy it as much as the first two. In some ways it seemed more formulaic--I pretty much had the murderer pegged right off.

I think I also missed the small-town stuff from the first two books. All of that background was much more of a sidenote in this one, since he was only there off and on. I did enjoy the parts with his son.

Here's what Goodreads has to say about them:

Trouble at the Red Pueblo

When Deputy Sheriff turned private investigator Spider Latham is sent to help the Red Pueblo Museum, he doesn’t suspect it will cause a rift between his wife, Laurie, and himself. Museum Director Martin Taylor is desperate, and his son Matt is angry. Some unknown person is bent on destroying the museum financially and is about to succeed. Things turn violent. It ends with someone’s skull bashed in with an Anasazi ax, and everyone has motive for the murder.Can Spider untangle the web of secrecy and lies surrounding the museum before the Taylors lose it all? And in the process, can he save his own marriage?

Death on the Red Rocks

Spider Latham finds himself at loose ends. No longer a deputy, he's not sure where he fits in. Then an eminent scientist falls to his death from the cliffs above town. The circumstances are suspicious--and all those with a motive for murder are houseguests of the Latham's.

It's Deputy Sheriff Toby Flint's case, but as everyone knows, Deputy Flint couldn't detect his way out of a paper bag. Helping him, Spider finds himself up to his neck in conjectures and clues until someone knocks him out and dumps him into Peek-a-boo Canyon dudring a rainstorm. Then he's up to his neck in water.

Feverishly working with Toby, Spider's intent on unsnarling the mystery before someone--one of his houseguests?--makes another try on his life.