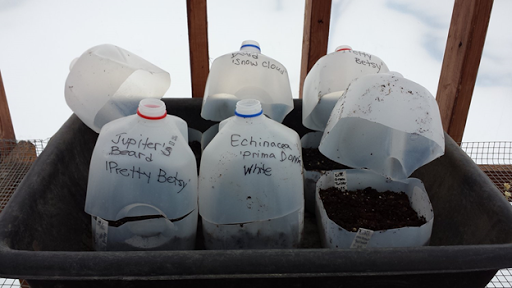 Last year my winter sowing results were decidedly mixed. I was expecting greatness and instead I ended up with a handful of plants, none of which were particularly great. I thought I would be seeing growth by April, and when early May rolled around with one seedling growing in one of the jugs, I pretty much gave up on the rest. Just a few weeks later, however, I noticed there were at least 2 other jugs with something green inside. Alas, I had already moved on by that point! I got the bachelor’s button transplanted, but the rest (both of them) languished inside the jugs. So, this year I’m going to try it again. I will keep a closer eye on them and not expect results so early.

However, I don’t want to waste a bunch of seed on this method that didn’t really work for me last year. So. Here’s the deal: I tried starting a bunch of seeds in my greenhouse at the end of last July, before it was completely finished. I had a devil of a time keeping them watered, as the wind kept blowing the plastic domes off the top, and it was very hot during this time. Consequently, none of them even sprouted. The trays have sat in my greenhouse since then, dry as a bone and silently mocking my paltry attempts.

Enough of that! So I filled up my jugs partway with potting soil, then scooped the sections out of each tray and nestled them into their new homes. Watered well, labeled, taped up, and away we go. Maybe I’m shooting myself in the foot by not starting out with new seed. On the other hand, my expectations are pretty low here! If they manage to sprout and grow in their new milk jug homes, fantastic! If they don’t do anything, I won’t be too sad or too surprised.

I did not use all of my seeds in those trays of yesteryear, so I will start another round in the house as time draws closer to spring. Best case scenario: I’m swimming in baby plants come spring! Worst case: I’ll at least have some to get a jumpstart on the growing season. 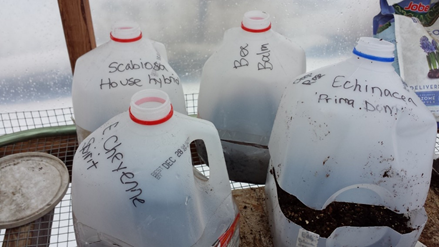 The milk jug method—we’ll see how this goes!

I’ve got 4 more to do: yarrow, white liatris, another scabiosa, and one more I can’t remember. (I guess I should have taken a picture of the tray when I trekked out to the greenhouse just now!)

You may notice that they’re almost all perennials. After last season’s struggle with starting annuals from seed, I have decided I need a much bigger section of perennials to fall back on, in case my annuals fall through. I did purchase a few at local nurseries last year, but they are so expensive!

One of my big goals for this year is to conquer this seed-starting business. If I can do that, it will save me so much money! Not time—it’s definitely a time-consuming operation from start to finish, but the few that I have had success with have been so satisfying; I think the time spent will be well worth it! 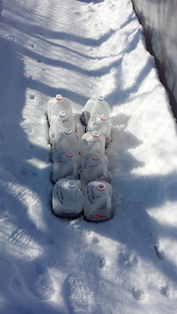 All lined up! I put these between the greenhouse and the east fence back there. As spring heats up, they’ll get a bit of shade here and protection from the wind. They’ll also be protected from children kicking them over as they play in the snow. :)