Perhaps wealth is not everything it's cracked up to be... 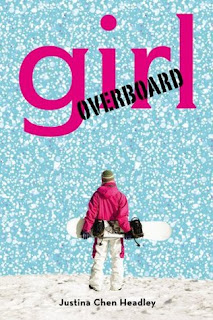 
Syrah Cheng has a life to envy: ever since her father's company went public, they have joined the ranks of the uber-wealthy, with all the trappings: enormous mansion to live in and enough money to buy whatever they want, as soon as they want it. What no-one can seem to see is that she is miserable in the midst of all the luxury. Her parents never have time for her, her mother is always pushing her to lose weight, and worst of all--ever since her snowboarding accident several months ago, she can no longer do the one thing she loves the most. Well, technically she could still snowboard, IF her parents would let her (they won't) and IF her knee could handle it (highly doubtful.)

Syrah has also found it very difficult to make friends, as everyone seems to just want to befriend her to get to her dad, or simply because of their money. She does have one good friend, Age, who has been her friend since before the big money came along. They used to snowboard together, but things have gotten awkward with him lately as well. She has never been able to bring herself to tell him why she went off alone in the backcountry, when she knew full well it was a bad idea, but a certain summer camp counselor had everything to do with it.

Syrah is constantly expected to live up to the "Ethan Cheng Way" (she hasn't read the book yet), and constantly feeling like she is falling short. As some major changes come her way, she will have to figure out the Syrah Cheng Way to surviving life--the sooner the better.

Syrah was a strong character, but one who doesn't discover her strength until later on--the best type to write a story about! I had my reservations about this book from the beginning. I mean, another book about the poor little rich girl? That's been done before! I was pleasantly surprised to find it had some depth.

As Syrah figures things out, she starts to look outside herself and realizes she can use this incredible legacy she now has at her fingertips to help others. That is the beginning of her inward shift.

I especially liked the way Syrah went from taking risks on the mountain, to taking risks in her relationships, with a much better payoff. She chooses to be vulnerable, to accept friendship in unlikely places, and to put herself in uncertain and awkward situations in order to get to know extended family better. In the process, she comes to realize how much she is loved (and always has been), as well as the first inkling of what her place might be within the family business.

Content: Some language. Some of the characters mention sex. Syrah tells an abbreviated version of the story of her first sexual experience, which was traumatizing to her, but doesn't go into detail. This is written for Young Adults--I wouldn't go younger than 16 with it. If your teenager has encountered some of these things at school already, this could bring up some good talking points.