I have got more planting to do than a….than a flower farmer in May! Yeah. That.

So you see, I went shopping at a plant nursery last week…and I came home with several treasures. Namely, lady’s mantle x 4 (or was it 5? the memory fades) for my front shade beds, white echinacea x 3 for the East side skinny bed, and oh yes, some Jupiter’s Beard (x 3 as well) that I found a place for in back. J & J Nursery helped me face up to reality, in their own way. You see, wandering those aisles of big healthy plants, I realized that my teeny-tiny echinacea seedlings are never going to bloom this year. It’s a fact, and I faced it right there on the gravel. Maybe, if I keep them alive long enough to get them in the ground, they could possibly bloom for me next year. However, that doesn’t help me at all THIS year, now does it? That’s when those 3 white ‘Fragrant Angel’ echinaceas went into my cart. Not that my purchases NEED justification, but let’s just say the other plants were also related to seed-starting failures, and move right along, shall we? 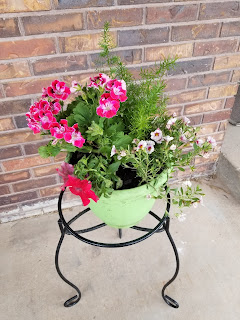 This very planter, as a matter of fact.

Then later on, I went to Lowe’s—because I had to, you see, to get some things for a planter I was being paid to put together. Had to. That’s right. You can nod your head here knowingly, because did I ONLY get the plants for the planter? Well no! Of course not! I found a beautiful honeysuckle bush that I really needed, as well as some perennial bachelor’s buttons that were the color I’ve been looking for (‘Amethyst in Snow’—white with purple middles, if you must know), and 3 gorgeous geums (‘Mrs. Bradshaw’) in a brilliant reddish orange. The bachelor’s buttons were on the clearance shelf, and so they were only $3 each! Just between you and me, the ones I chose didn’t look all that bad. They’re going to be fine. Once I get them planted.

So you know, planting! It’s always bad for the image (and the wallet) when you buy plants and leave them to languish and die on the porch. I am quite happy to report that so far I have gotten everything planted that I bought, with the exception of the bachelor’s buttons.

THEN Thursday—oh, this was so awesome! Thursday, my friend from up the street called me and said she had a bunch of extra flowers she was pulling out of her flowerbeds, and wanted to know if I could use them. YAY! So she brought over large clumps of irises, tulips, daffodils, daisies, and I don’t even remember all what else. Linnae’s Home for Unwanted Plants—Now Accepting Donations!!

I have my work cut out for me this weekend, for sure! Especially since, before all this plant bonanza, my original plan for this weekend was to sow all my warm-weather seeds. I have got cantaloupe, sweetmeat squash, several types of pumpkins, beans, tomato plants, cucumbers, and peppers to find space for in my ever-dwindling garden. I may actually rent a garden box from my neighbor for the pumpkins. Oh, and I guess I’m going to try growing the peppers in the greenhouse, so they won’t take up any garden space. We may have to get creative and grow the cucumbers up a trellis or something.

Flowers I still need to sow include: celosia, sunflowers, and the ornamental grasses. Possibly others. It seems like I’m forgetting some.

The biggest obstacle to planting for me right now is the WEEDS. I have made good use of the hoe this spring, and have cardboard down in some of the aisles, grass clippings elsewhere, but there are still sections of the garden that the weeds are getting the best of me. I have to weed for 45 minutes to plant for 10! It’s frustrating. My goal has been to have every bit of bare ground covered, but I have fallen short of that. So that has to be part of my planting plan. Weeding—always and forever—weeding, then planting.

Also, we went to Lowe’s again this week for other stuff, and I did not even set foot in the garden area. Are you so proud of me? I was proud. I just know if I go over there, I’m going to find something to buy. It helped to have piles of plants at home waiting for me to get them in the ground! Erm… didn’t help enough though, I suppose, because our next stop was Costco, and their plants are right out in the middle of the store! Totally unavoidable! So….I purchased one their 6 packs of geraniums. Yep. I have already totally justified it and will plant them today. So let’s just be done here. Moving on! 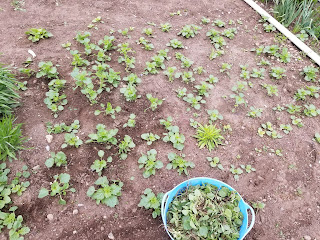 You can see space between them! Not for long, though. They will grow to fill that in pretty fast. That whole blue bucket there is the Bells I pulled up.

Oh, as an update on the Bells of Ireland: I was very firm and Set Some Boundaries out there on those self-seeded Bells. I made an aisle on either side with the hoe, I chose one every 6-12” apart or so to be the Chosen One, and pulled out all the rest. I’m telling you, I even thinned some further that I had left to grow initially. I yanked with determination and filled up a whole weed bucket with them. (Poor things.) I have decided, though, that the first pass is the hardest. The ones that I had already thinned were doing so much better than the others! That made it easier to get down to business on the rest.

Next up for thinning: bachelor’s buttons and pennycress.

I wish my Queen Anne’s Lace would grow so I could thin it out. Alas, I may need to re-seed it. It likes cool weather, but I read recently that you can sow it anytime up until it’s 85 degrees outside. Well, with our cool rainy spring this year, we haven’t hit 85 yet! So there may still be time.