A Few Words About Yucca

We just got back from a short trip to Mesa Verde National Park. We got to see the amazing cliff dwellings and other structures built by the Ancient Pueblo people hundreds of years ago.
It was a great trip!
The scenery was absolutely gorgeous. 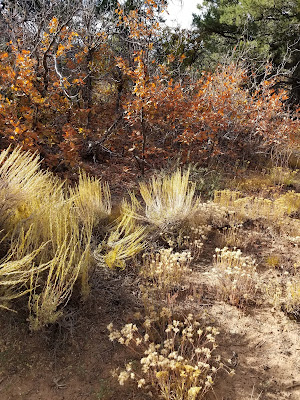 There was pale yellow rabbit brush, scrub oak in glorious shades of orange and red, various types of wild grasses that had all bleached out to a creamy color, red sandstone, burned out trees in shades of black and gray, and also yucca plants. Yucca looks similar to iris foliage—except the yucca leaves come to a point on the end that is quite sharp—especially once those tips have dried.

Rewind to 15 years ago. The first house we purchased was very small. I almost said “tiny,” but at 750 square feet it was bigger than today’s tiny houses tend to be. Anyway, it had 2 bedrooms, a bathroom, a living room, and a kitchen. That was about it. This was the first time I had a yard of my own, and I started experimenting with gardening and growing flowers.

One of the first things we noticed was the enormous yucca plant next to the cement walkway from the driveway to the porch. I wanted to plant bulbs there and possibly some pretty shrubs. The yucca had to go. So my husband and I dug it out. It came back. We dug it out some more. Came up again. It turned out that pretty much any piece of root you left in the ground would generate a new plant. We were frustrated. We dug it up AGAIN. Folks, we lived in that house for 2 years and we must have dug that plant up 5 or 6 times. It was a beast!

Now on this trip to the high desert mesas, I was confronted with yucca again, this time in its natural habitat. It was beautiful. It truly was. It’s tall, spiky leaves provided the perfect contrast to the softer, rounded forms of the rabbit brush. The green complemented the other fall colors just beautifully. The plant itself, with the tendrils of fiber coming off down the length of each leaf was beautiful. 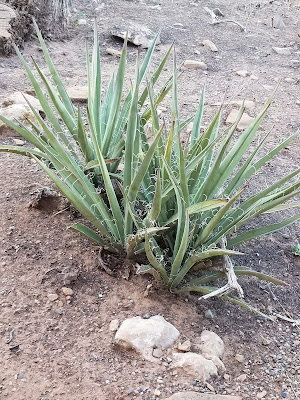 The mesas had burned several times in the last 30 years, and there were signs documenting the different fires. Guess what was one of the first things to come back? That’s right. Yucca. It is as tough as nails (as we found out, much to our chagrin!) In my flowerbed, this trait was not appreciated. In a place where fires are a frequent issue—it’s essential. We learned that yucca plants also produce their own antifreeze, and thus are pretty much evergreen, even though they are not woody shrubs.

In addition, we learned that to the ancient Native Americans, the yucca plant was everything. The flower stalks, flowers, and fruit are all edible. The fibrous leaves were used to create everything from clothing to baskets to ropes and nets. The root will lather up in water, and was used as soap.

So what did I learn from this experience?

Every plant has its place. While I still don’t think yucca is a great flowerbed choice, in its natural environment it was beautiful and perfectly suited.

Plants are useful beyond just their pretty flowers. What?! Says the flower farmer in me. It’s true, though—and I knew that, but it was a good reminder. Just because we can’t see the value in a plant, doesn’t mean it isn’t there. The exception to this may be bindweed. I am still searching for its value!

The traits you may find frustrating in a plant could be the very traits that ensure its survival in its native habitat, where other life depends upon it.

Also, now my husband wants to plant yucca at our house, so we can be prepared for any disasters that may come along. I told him as long as he plants it at the back edge of our property, along the fence and across the ditch, go for it! If he does, it will still be there when we’re long gone.