I haven't taken very many pictures of our community garden plots, because so far they are still full of tiny seedlings and weeds, which don't make for very good pictures. I'll get some the next time we go over and add them to this post.

I'm happy to report that our gardens are coming along!

We have been asking around as to when is the best time to plant warm-weather stuff, like tomatoes and peppers. Everyone has said around Mother's Day, which--as you know--was last week.

So even though the weather has been almost identical every day since the first of May (60 during the day, 48 at night), we waited until this past week to go get our plants. Truthfully, we've been busy with other things too, otherwise we would have just gotten them in earlier! 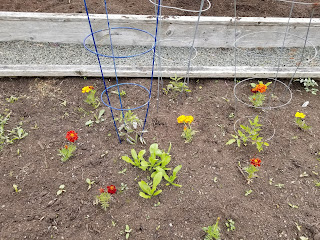 We put in 4 varieties of tomatoes: Sweet 100, Oregon Spring, Black Krim, and Roma. I still want to look for Sungold, as those are my favorite. Another tip from the locals: the tomatoes that do the best here are the smaller, earlier varieties, because it just doesn't get very hot during the summer.

They put marigolds between the tomatoes. We didn't get any peppers, which was an oversight, so we may be going back this week and looking for peppers to plant. 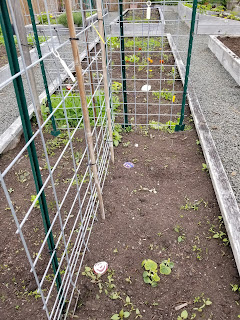 Meanwhile, the yard-long cucumbers are finally start to sprout some true leaves, and the cantaloupe, gourds, and mini pumpkins are trending in that direction, as well. 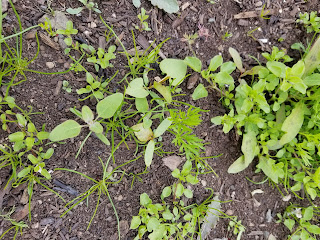 You get two pictures of the carrot patch.
This is what we're sorting through to find the actual carrot seedlings! 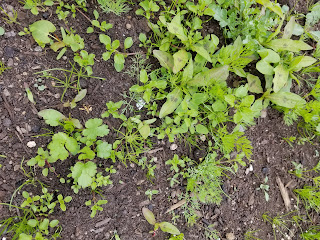 I think we've finally figured out which seedlings were carrots, too, which is a big breakthrough. We've had so many weeds coming up, many of them "gifts" from neighboring garden boxes that let their plants go to seed over the winter, that we've had an interesting time figuring what's what.

In amongst the carrots that we planted, we also have had volunteer fennel, cilantro, swiss chard, and lettuce coming up. Plus all the ones we know for sure are weeds. Oh, and something bright pink that we think might be either a type of spinach or possibly kale.

The kids transplanted all the cilantro into one little patch, to give our carrots some more room.

Adam's spinach patch is looking good, too, and starting to produce some edible leaves.
He's reluctant to thin it, however, so not sure how big they'll get. 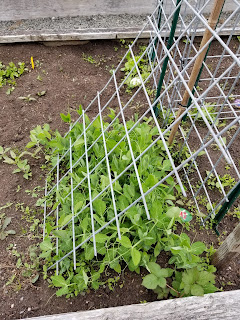 The peas are getting tall and sort of climbing up the trellis. 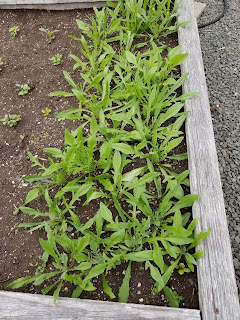 Over in the flower box, my bachelor's buttons are doing fantastic.
I've thinned them a couple of times, but now I'm just letting them grow a bit crowded.
I was excited to find 'Madame Butterfly' snapdragons for sale at the nursery, so I bought three 6-packs, and planted them out in a block right next to my bachelor's buttons. This is the type of snaps I had last year, and I loved their frilly, open faces. They're a mix of colors. 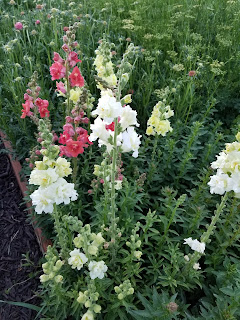 Here you go--I found a picture of last year's.
The snapdragons were all about 10 inches tall, and I gave them the chop--cut them off to just above the lowest sets of leaves. It will set them back by a couple of weeks for bloom time, but instead of one main stalk, I'll get 4 or 5 per plant. It's hard to pinch them when they're doing so well, but it will be worth it! 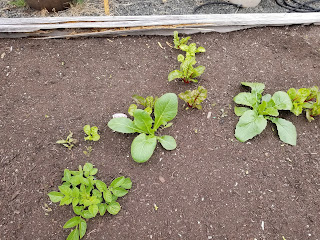 I've got cosmos coming up next to that, and I'm still waiting on zinnias to pop up.
I'm not sure it's been warm enough for the zinnias to come up yet. In warm weather they will sometimes pop up in 3 days--it's been 10 so far and no sign of them yet. They're sulking.
So in the picture are all volunteers: potato plant, swiss chard, lettuce, and something else. 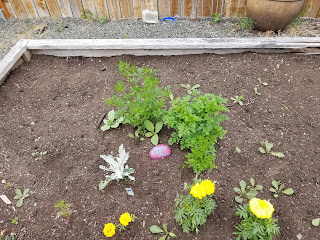 Oh, and I bought 6 dahlia tubers from a roadside stand and put them in on the end of the box (behind the parsley there in the middle.)
I'm actually really excited for those!
They haven't come up yet either.
If I have any extra room, or things don't come up, I'm going to fill it in with sunflowers.
I'm looking forward to having a box full of color and beautiful flowers!
Posted by Linnae at 8:21 AM