A Handful of Fantasy + 1 Sci-Fi

Trying to get caught up on my reviews again! If you like fantasy, there's a bit of a range here. I don't read nearly as much science fiction--as this list represents so well. If you do, give me some of your favorites! It's a genre I wouldn't mind branching out into more. 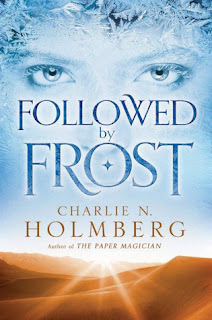 Followed By Frost, by Charlie Holmsberg

3 stars: To be read in your coziest PJ's, with extra blankets on hand!

Smitha is the town's popular beauty queen, with attitude to match. She leads guys along for fun, then drops them like a rock (also for fun.) Then one day she stands up the wrong guy. It turns out he is a magician, and in his hurt and anger, he curses her to have the coldness of her heart be matched by the rest of her (I'm paraphrasing here.)

Smitha becomes the Snow Queen, essentially. I mean, blizzards gather wherever she goes, she can't touch anyone without freezing them, and she herself feels miserably frozen cold all the time. Her food freezes before she can get it to her mouth. Everything is just ice. Brrr...

It's not long before her family and home village ask her to leave, as the snow is piling up higher than anyone can ever remember--and it's supposed to be spring. She becomes a wanderer; hunted, chased, and feared wherever she goes. Until one day, when the person hunting her actually catches her--and offers her a chance for a new life.

* * * * *
This was a good book to read in January, when it was bitterly cold outside. I piled on the blankets and had at it! I don't enjoy being cold--at all--so all the descriptions of how cold Smitha was all the time were not my favorite part of the book.

However, Smitha did eventually make some satisfying personal growth (she had a long way to go), and I enjoyed the ending.

** You can read this one for free from Kindle Unlimited right now, if you get that! 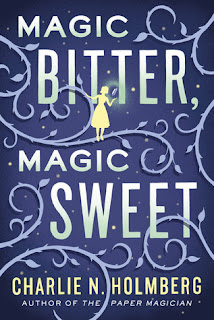 Maire has some big holes in her memory--specifically, anything that happened prior to a few years back, when she found herself beaten up on a rural road. Some kind strangers took her in and since then she has discovered a talent for baking. So she does that--infusing a little something extra into her confections to help her customers with their daily problems. She is content, except for nagging questions about her past that she can't come up with answers to.

Then one day raiders come to the village. Maire is captured, along with many others, and eventually bought by a man named Alleman. He is crazy and vicious and also a little bit magical. Maire survives physical abuse, bakes magical cake for a few different well-known fairy tale characters and tries to figure out who she is/was and what in the world is going on.

You see, Alleman has this strange connection to her. Also, there's a spirit-type guy named Fyel who comes around every so often to chat and give her completely unhelpful, vague clues. There's definitely something she should be remembering and figuring out, but in the meantime, she also must survive.

* * * * *
This book was really different. Most of the book was Maire trying to figure out what's going on and why, while she got beat up in various ways. Yeah. The connections to fairy tales were little glimmers of light, but they didn't last long. Then when she finally put all the pieces together, it was just... different. The conversations with Fyel were frustrating. A lot of the book was frustration and pain--for Maire and for me as a reader (okay, not so much physical pain for me, but mental WHY? type pain.) I don't know what else to say without spoiling it, but not my favorite. An extra half-star for the final resolution.

Content: Physical abuse, violence from the raiders. For adults. 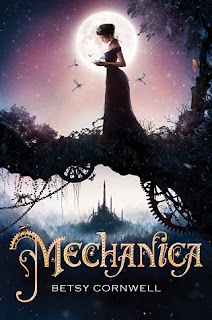 3.5 stars: Cinderella with a side of steampunk!

Ever since her brilliant mother passed away and the Steps came to live at their house, Nicolette has been little more than a servant. Until her 16th birthday, that is. That is when a letter from her mother prompts an investigation of the basement. With some clues from the letter, Nicolette finds the best birthday gift ever: her mother's workshop and studio, tucked away all this time behind hidden panels. She is so excited! She can hardly wait to get down there and check it all out. Of course, there are chores to be done. (Thank you, magical mechanical inventions that the Steps don't know about.)

As Nicolette explores her mother's workshop, and even begins to design and make some things of her own, she gains hope that there will be a way out of her situation. There's a Technological Exposition coming up, the first of its kind in the kingdom, and she is determined to enter and find a wealthy patron or two. If she could just earn her own income, she get leave the Steps forever and live and work on her own!

Slowly, her life begins to open up as she makes new friends, and begins to use her sharp mind for inventing; following in her mother's footsteps. As long as the Steps don't find out until it is already said and done.

* * * * *
I've got to say it: this is not the Cinder remake. It's unfortunate that they came out within a couple years of each other. While both retellings cast our heroine as a mechanic (what are the odds of that unique storyline being duplicated?), they are very different in tone, setting, and overall plot. Compared to Cinder, this one stays much closer to the original fairy tale.

In addition, Cornwell brings up ideas of true friendship, plus class and race differences. Worth your time for the awesome mechanical bugs and the little horse.


I've had a hard time settling into books over the past few months--especially longer books. I look through my options, even read a chapter or two, then put it down or scroll to the next on my Kindle. I don't know why I've been so antsy. Usually I know exactly the type of book I'm in the mood for at any given time.

So, these last two at least pulled me in enough from the beginning to get past that initial apathy. Green Rider, especially, sucked me in and I couldn't put it down. The other was...less compelling as time went on, but I did manage to finish it. 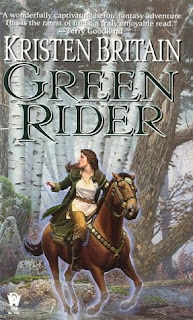 Karigan G'ladheon has been kicked out of school after a fight with the wrong person--the school bully, who happens to be very rich. She's defiantly trudging along, thinking only about she will break the news to her father, when she stumbles upon a dying man in the forest. His back is full of black arrows, and he wears all green. He is a king's messenger--a Green Rider--and he pleads with her to take over his mission and get this message to the king. The message is of the utmost importance.

Karigan takes on the charge--including the Rider's horse--and off she goes to meet her destiny. Though she has been training with the arms master at school (and has proven to be a quick study), she doesn't know much about true battle. A battle it will be, too. She's got all kinds of people after her, including he of the black arrows, determined to see her die before her message gets through to the king. She also discovers a few unique powers of her own that may tip the balance slightly more in her favor. She will need all the help she can get if she is to survive.

* * * * *
Karigan's switch from schoolgirl to Green Rider happened gradually enough to be believable. I mean obviously, some of it happened right away--she grabbed the messenger bag, jumped on the horse, and took off--but her thoughts and feelings about it took longer to settle.

It was fast-paced and exciting! There was always a new fight or challenge to win or race away from. She was saved in the nick of time enough to stretch credibility a bit, but hey--we were already suspending our disbelief, right?

After the breathless pace to deliver the message, the political intrigue at the castle added another layer to the story. Britain managed to tie the two together in a way that made it work, even with the plot slowing down quite a bit.

There were hints of a romance to come that I didn't like the looks of much. If she ends up with who I think she will, it said something like he was only 10 or 15 years older than her. She's 18. That's a huge age/maturity difference. If they were 45 and 60, okay fine. I'm going to be grumpy if I'm right. It was all just barely beginning, though, so I could be wrong. (I hope.)

Content: Violence--Karigan spends a good deal of the book fighting for her life. A near-rape, plus battle scenes. For older teens and adults. 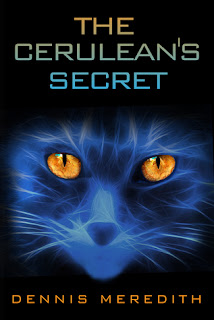 The Cerulean's Secret, by Dennis Meredith

2 stars: I nearly stopped reading more than once, then picked it back up again. Maybe it was that cover!


Set in a not-so-distant future where a couple of big companies have made big money from genetically engineering mutant animals. The most common, of course, being the cogs and dats, but other stuff too, even unicorns and dragons. They make most of their money off of wealthy patrons eager for an exotic showpiece pet, private collectors, and those with commercial interests in the animals.

The most talked about creation so far is the Cerulean cat--a gorgeous animal with blue fur and golden eyes. Just as the cat is about to make its debut at a cat show, it is kidnapped.

Timothy Boatwright is a New York cabbie who is in the wrong place at the right time. Little knowing how his whole life is about to be upended, he picks up a nervous man carrying a large box. Though the ride is pretty much business as usual, Timothy catches a glimpse of a blue-furred tail poking out of the box just as the man leaves the cab.

Later it becomes clear that he is the only witness to the kidnapping suspect. However, when he goes to the police with his information, he immediately gets treated like a suspect himself. Before he quite knows what's happening, it's not safe to go home anymore, he's picked up a couple of allies (a cat lady named Callie with some mad skills--and her daughter Lulu), and he's racking up the people who want to kill him.

* * * * *
One of those stories where one thread becomes loose, but when that thread gets pulled, everything starts to unravel.

The author used an interesting plotting device, where the story started in the present, then about 2/3 was told in retrospect until we caught back up to the present. Then it finished out from there. I suppose it added a little suspense, but I don't think it was really necessary.

The story itself had plenty of twists and turns up until the very end. I guess that's what kept me picking it back up. To be honest, I'm not sure it was worth it.

Content: Violence, with plenty of accompanying blood and gore. Also, quite a bit language throughout. "Lovemaking" mentioned several times but not ever described. For adults.

** Get this for free on Kindle Unlimited--now that I've talked you into it! Ha!


* * * * *
Do you ever go through times where you just can't choose your next book?
It doesn't happen very often to me, and it is somewhat unsettling.

I know what would help--gardening! That always seems to help me sort out my thoughts.
Oh wait. There is still a foot of snow on the ground. Sigh....