I was browsing in the Teen section of my library the other day, when--what do you know? I came across not only the last book in the Waterfire Saga, but right next to it, another book about mermaids. Clearly, it was time to do some reading about fishy folk who live under the sea.

By the way, this first one completes a series, which was one of my Reading Goals for this year. That was unexpectedly easy! I wasn't even thinking of this series when I made the goal, though, and in fact there are still a few others I want to complete. So that goal may become expanded! 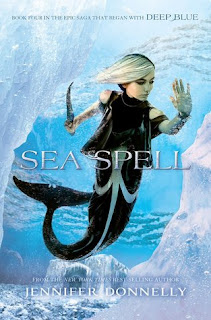 3 stars: It's time for the big showdown!

Challenging times for the Mer people. Ava must navigate the treacherous swamp waters of the Mississippi to find her talisman, with Death Riders on her tail. Astrid will come face-to-face with her immortal ancestor Orfeo (the one behind all this trouble in the first place) and must somehow best him without any magic to speak of. Meanwhile, Sera and the rest of the gang are dealing with the headaches of training goblin troops in preparation for either the attack on Abbadon or retaking Sera's home city and fighting her Uncle Vallerio. On top of that, there's a spy in the camp wreaking havoc and costing lives.

Whatever happens, the battle with the monster Abbadon is imminent, and its outcome will determine the fate of all peoples.

* * * * *
All our loose ends were tied up, which is always good. Of necessity, this one bounced around a bit between characters, which made it harder for me to get into the story. The friends of the blood bind grew individually and as a group. On the villain side--that Lucia chick--she was one scary gal! Orfeo was one of the more nuanced villains. It was interesting to see another side of him when Astrid visited his lair.

The ending was fitting, without too many surprises. It's hard to talk much about without giving away spoilers, seeing how it is the 4th book. In the end, I wasn't amazed, but I was satisfied.

Find my reviews for the first 3 books in the series here: Series Spotlight: Waterfire Saga. 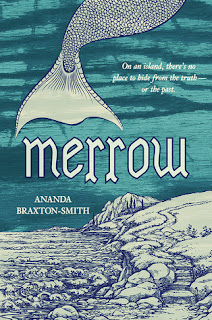 3.5 stars: Where does belief end and truth begin?

Neen, an orphan, lives with her Aunt Ushag on a small homestead next to the sea. Her father died before she was born and her mother left when she small and never returned. Stories abound about what happened to her mother, but the 2 main ones are that she drowned herself from grief, or that she went back to the sea to live with her people.

You see, Neen's family has had stories told about them for many long years now. They are touched by the Other. Some say one of the great-grandfathers married a Merrow--a sea girl--and the children she bore to him all had gifts...or curses, depending on your point of view. Neen believes the old stories. She has the Red Scale on her own arms in the summer, doesn't she?

Ushag refuses to believe. The bitterness of being left behind and left to raise Neen and care for the land all by herself has turned her into a sour old woman. The two of them rarely get along anymore--Neen pushing for answers and Ushag refusing to talk.

Then a couple of things happen: the two find a mostly-drowned man tangled up in the gill net (and take him home to save him) and Neen finds something in a sea cave that seems to confirm every story she's ever heard. If she can only get her aunt to see it, too, it might be the beginning of something better.

* * * * *
Steeped in the lore of coastal fairy tales: selkies, water horses, changeling babies, and the Other. This is, at its heart, a story of a girl growing up and figuring out for herself what to believe and how to frame it in her heart.

This could easily have veered into the realm of magical realism, but it managed to walk that line without ever quite stepping over it.

Content: Clean. As Neen is 12 in the story, this will probably appeal most to the older middle grade crowd, or teenagers enough into mermaids to overlook the young protagonist. For ages 10 and up.