Mini Theme: On the Run

So this falls into the thriller sub-genre: "ordinary person is framed for heinous crimes and has to run for his or her life." I could make a separate bookshelf for them on Goodreads, but the name would be longer than the list itself! Most of them include an element of romance, which enters into the plot in varying degrees.

Incidentally, these are all written by LDS (i.e. Mormon) authors, which I prefer for this genre, as they tend to be much cleaner overall and less bloody during the violent scenes. As I was making this list I realized that a couple of them are very cheap on Amazon right now, if you get the Kindle edition! So if you want a low-risk way to check out the genre, now would be a great time! (Title links are affiliate links, just fyi.) 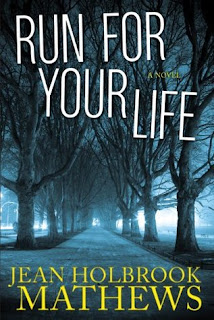 Run For Your Life,* by Jean Holbrook Matthews


3 stars: Reminded me a lot of The Pelican Brief, but cleaner and not as intense.

Mattie Mathis is a staffer for her Uncle Max, who is about to retire from being a congressman. She gets a strange call from her boyfriend Craig about some research related to an environmental lawsuit. The implications (detailed in a paper now on its way to her) could extend to federal judiciary nominees and beyond. Before they even have a chance to discuss it, he is dead. So is the law student who wrote the paper and his professor.

As the police force scrambles to put together the pieces, Mattie realizes with chilling certainty that she will be next. An officer named Jack Summers is put on the job to keep her safe. Unfortunately, he can't be with her every minute. After a few near misses, she decides to hide out on her own and figure out how to stop this madness that has taken over her life.

Enjoyable and suspenseful. I appreciated that the romance moved VERY slowly, especially since Mattie was still mourning Craig. A bit scary to realize how easy it would be for the bad guys to find you, if they had a mind to do it--especially in our connected, digital age. She keeps saying, "How did they find me?" Well, a phone tap here and few clicks of the mouse there. Didn't take much. Yikes!

*From my home library!

So I went through my reviews on Goodreads to dig up a few more for you! Here's what I found: 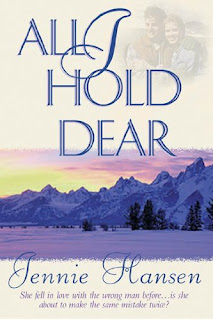 All I Hold Dear, by Jennie Hansen

After a broken engagement Courtney needs some time alone, so she heads to her family's cabin at the edge of their large ranch property. However, time alone is not in the cards. She has only been at the cabin for a short time when a man, almost frozen, stumbles through the door. It's obvious that he needs help, but she's also all alone in a remote cabin, and there's no telling what kind of man he is...or who may be after him. What becomes clear fairly soon is that not only is his life in danger, but hers is as well.

The suspense and romance are in about the right proportions for my taste, but the writing was much stronger on the suspense side. (Or perhaps I am just more critical of the smarmy romance stuff...?) Good enough that I'll try some of her others 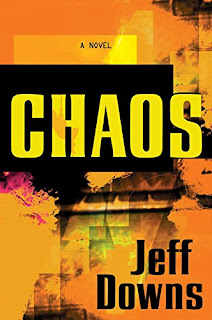 Jason Harrington is a teacher. His life is pretty normal. That all changes one afternoon when he gets home to find that his apartment has been ripped apart, including a knife slammed into the headboard. Then he gets a phone call that puts him on the run: essentially, he's being framed for killing 4 cops and whoever really did it is going to take him down, as well.

The rest of the book is him eluding his attacker (or not, or nearly), while also rekindling a past romance with a girl named Kelly that he just happened to ask for a date before this all went down. It's lucky that he has her to help him, but either way it doesn't seem like he's going to last long. If he can just get to the bottom of it and figure out why he's been targeted, he might have something to go on.

This was a quick read, as I was racing through to see if and how he survives. There were a couple of unexpected twists near the end that upped the ante by quite a bit.

Well done. Jason and his choices were believable. 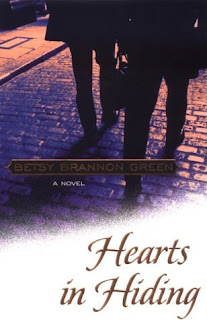 When Kate finds out that her FBI agent husband is dead, and that her life is also in danger, she is immediately sent into hiding. With the help of the agency, she has a new name, a new home, and even a new "husband" (another agent). To top it all off, her baby is due in a few months. Meanwhile, the killers are still out there, and no disguise is fool-proof.

* * * * *
Suspenseful, with some humour and romance thrown in. The first book in the Haggerty mystery series. I recommend reading this one before delving into the rest of the series--I didn't, and it cleared up quite a few points I had been wondering about. Other than the dumb title, this is one of her best that I've read so far. 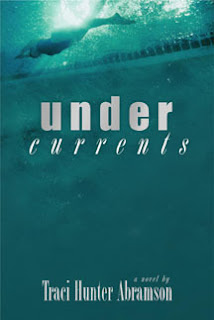 Shaye is an innocent girl who was in the wrong place at the wrong time. She escaped with her life, but unfortunately, now she has to be in the Witness Protection Program. Her dreams of swimming at an Olympic level have to be put on hold indefinitely. With all of that, she's starting at a new university, and can't even admit that she's Mormon.

As she starts to settle into her new life a little bit, the past has a way of tripping her up, particularly once she meets a boy named Matt.

Now I want to find the rest in the series. This one was a cut above most of this genre I've read.

Have you read any of these? What would you add to this list? I know I've read more, but these are the only ones that I've actually reviewed...