Mini Theme: The Perils of Greed

Somehow this round of adult nonfiction has almost all had the same undercurrent: greed run amok. What happens when people put money--whether making it or saving it--above everything else? Well, these books give 3 compelling answers to that question. 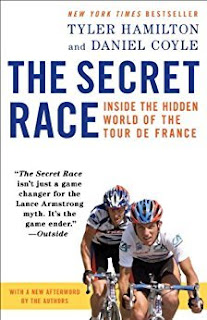 The Secret Race: Inside the Hidden World of the Tour de France, by Tyler Hamilton and Daniel Coyle

Hamilton was rising in the skiing world, when a serious accident changed his course. He became a professional biker. Eventually he worked his way up to the team fielded by the U.S. Postal Service. The team's manager was obsessed with winning. He pushed them to begin competing (and living/training) in Europe, which they did, devoting their lives to the sport year-round. Hamilton was a teammate to Lance Armstrong and talks quite a bit about the evolution of their friendship and rivalry.

He also describes his personal life to some extent, including his marriage (and later divorce). His tolerance for pain was legendary. In 2003 he came in 4th place in the Tour de France, even though he broke his collarbone in one of the earlier stages.

Hamilton describes how he got started doping and taking drugs. First it was a way to simply keep up. It was just a little red pill to take (testosterone) to help him recover more quickly from the brutal training runs and races. It was administered to him by the team doctor. Then he noticed how certain select team members received white paper bags before races, and that invariably, they were the ones who came in first on the team. He felt he had to prove himself and get into that inner circle.

In fact, Hamilton said for most of them it took roughly 1000 days to cave to the peer pressure and start doping. Essentially, 3 years of grueling workouts for little to no reward on the race course. Though he always felt guilty about it, particularly about the lies and deception required on a constant basis to keep the news out of the media, Hamilton admits that when he hit that 1000-day mark, the choice wasn't hard to make. He had already invested so much in the sport and sacrificed so much, that it seemed like the only option was to do it.

* * * *
Hamilton tells a compelling story. This was an eye-opener for me. It's hard to imagine feeling so much pressure to win that pretty much anything can be justified.


After leaving the U.S. Postal Service team, Hamilton joined another team in Italy. He quotes his trainer as saying:

In a very telling afterwords, Hamilton notes that the winner of the Tour de France in 2011 would have gotten 40th place back in 2001, when he was riding in it.


Content: Obviously, there's a lot of talk about drugs and descriptions of taking them. I knocked off one star due to the sheer amount of bad language. Be forewarned--it's a lot; mostly in dialogue. 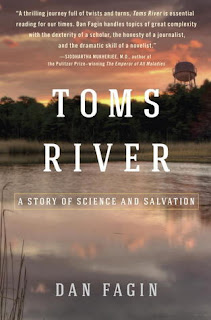 The title link goes to the separate review I did of this one a month ago. For this context though, let me just point out that every decision made by Ceiba-Geigy to avoid proper disposal of their toxic industrial waste was centered on greed. It would have cost millions of dollars to deal with their waste and they did not want to pay that much. They put making money over the human costs of long-term and terminal illnesses for many of their workers and those in the township. Pretty sad. 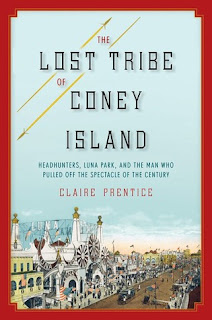 The Lost Tribe of Coney Island: Headhunters, Luna Park, and the Man Who Pulled Off the Spectacle of the Century, by Claire Prentice

3.5 stars: Compelling and readable account of a crooked man and his human exhibit business.

In 1905, Truman Hunt brought a band of Philippine villagers of the Igorrote tribe to New York, to be part of a human exhibit at Coney Island. Hunt had lived among the Igorrote's for some time before coming up with the scheme. Truman had an interpreter named Julio to act as a middleman when needed. Julio was half Igorrote and spoke the language.

The villagers that accompanied him across the ocean were there under contract for one year. They were supposed to be earning $15 per month each, plus tips and any money they made from selling handicrafts. It sounded like a grand adventure for most; a chance to get rich and provide for their families for many years to come for others.

Well, someone got rich, but it certainly wasn't the Philippinos. After arriving on the West Coast, Truman booked them for shows all the way across the country, eventually setting up in Luna Park. The tribespeople were headhunters and ate dog, two facts that were soon blazened across every newspaper headline.

They built a village, of sorts, within the confines of the park. They performed native dances and ate a lot of dog. In fact, they complained to Hunt several times that the steady diet of dog was not good for them--back home it had been just on special occasions. Their main diet was sweet potatoes, rice, and other plants. Hunt ignored them--the dog feasts were good for business. One of many requests from his charges that he ignored.

In fact, millions of people came to see the Igorrotes, making piles of money for Hunt and for the owners of Luna Park. They were the top attraction for several months. Then the owner of the other main park on Coney Island offered Hunt a better deal. Contract notwithstanding, he moved the Igorrotes to their new home in the dead of night and set up shop at the competitor's park. Conditions for the Igorrotes just got worse from there.

* * * * *
Truman Hunt was a piece of work. He started off as a friend to the tribespeople. When he lived in the Philippines with them, he doctored them and treated them well. Then, it seems that he was utterly corrupted by greed. At some point along the way, the Igorrotes stopped being human beings who deserved humane and fair treatment, and became to him simply a commodity. Whatever he needed to do--or get them to do--to bring in more money, he would do it. He staged fake weddings; he made up wild stories about them. In the end, he failed to even provide adequate housing and food for them.

It was all to get publicity and make more money. For himself. Do you think they saw one dime of what he promised to pay them? No. He told anyone that asked that they were such a simple people they couldn't be trusted with their money, and he was "saving it for them" to give to them all in one lump sum at the end. Yeah right.

It was interesting to read the backstory on what was a huge phenomenon back in its time. I didn't know anything about it going into the book, but this really opened my eyes. Now we look on a human exhibit with revulsion, but apparently back then it was completely accepted. Particularly if those being exhibited were considered to be inferior to Western humans in some ways. Hence the headhunting, dog-eating Igorrotes.

This story made me sad and it made me angry. Hunt was so dishonest and greedy. I liked how it asked--who were the true savages in this story? It certainly wasn't the tribespeople, with all their customs.

* * * * *
Okay, it's a good thing I've moved on to more uplifting reading since I read these--it was becoming a bit depressing reading on this Mini Theme. Have you read any lately that would fit into this theme?
Posted by Linnae at 7:00 AM