A Dose of Magical Realism

A couple of magical realism stories for you today. In the first, a family of knitters have knitted magic into requested items for generations. What will happen when it's all about to fall apart?

The second is a story about a girl getting to know her grandfather. More than that, it's a story about an utopian community and what led to its downfall. Or maybe it's just about bees and drought and green lake water. Read it and decide for yourself. 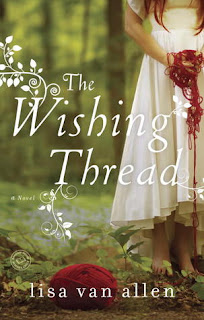 3.5 stars: Is magic what's holding this family together, or is it something else?

The Van Rippers are a magical family who knits desires or wishes into items, each requiring a sacrifice in return. No guarantees or returns. Unfortunately, they can't use any of the sacrificed items for themselves. Their house, which has been called "The Stitchery" for as long as anyone can remember, is falling apart and they can't afford to fix it. Not only that, but that town council has plans to bulldoze the entire neighborhood to make a room for a new business/condo mix.

Aubrey is the current, reluctant keeper of both the magic and The Stitchery. She is one of 3 sisters who were raised by Mariah, and tends to shyness and lack of confidence in her own abilities. With the death of Mariah, her other 2 sisters return for the funeral, each with baggage of her own.

Bitty is the oldest. She refuses to believe the magic is real and she especially doesn't want her 2 children sucked into the pretend world of the magic. Then there's Meggie. She's a wanderer; always going her own way, with very little communication beforehand with those she loves. She's never told her sisters as much, but her wandering has had a purpose: she's been looking for their mother all this time; from town to town, following the threads. She has found traces of her, but nothing concrete.

As these three sisters deal with their childhoods, they realize they're also going to have to come together to face the threat to the neighborhood and their family's way of life.

* * * * *
The magic in this story is tenuous, like the strands with which it is woven. It appears and reappears, but it is not always what it seems.

I liked the relationship of the 3 sisters in this one, and the way they came to terms with each other again, after some hurt and bitter moments in the past. I liked the way the whole neighborhood came together for a gigantic spell-making/knitting extravaganza. I really liked seeing Aubrey find romance and gain some confidence in her own abilities.

Strangely enough, though, what I liked most was the aftermath. When they realized that change must come, and what that meant for each of them individually and as a family; and even as a community. I thought she captured very well the thrilling and terrifying mix of emotion that you would feel to be released from a lifetime of expectations, and then, what comes next after that.

An extra half-star for the cover. 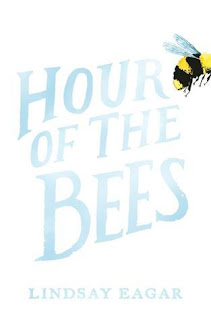 Hour of the Bees, by Lindsay Eager

Carolina (just Carol, thanks), her little brother Luis (Lu), and her parents are not too excited to be spending their summer at Grandpa Serge's place in the middle of nowhere, New Mexico. He has dementia and must be moved into a nursing home, but he does not want to leave his sheep ranch. There has been a drought at the ranch for the past century, though, and pretty much everything has dried up and blown away. Except for the sage brush, and a few skeletal sheep. And Serge.

Serge is a bit cantankerous, not to mention bound and determined not to leave the ranch. There's some unfinished business between Carol's dad and Serge that often makes things tense. If that weren't enough, rattlesnakes and other desert predators abound. Carol's mom is supposed to make notes about his "slips" into dementia. Carol just wants to leave. Despite all that, Carolina begins to get to know Serge, over time listening to all of his stories.

The stories have a common theme: a green-glass lake, a magical tree, and bees. A happy people forgotten by time. A young couple in love, though the girl is restless and wants to experience more of the world than can be found in their little utopia by the lake.  Carolina comes to realize that the girl and boy are her grandma and grandpa--but that can't be possible, can it? This all supposedly happened like 100 years ago or more. And all that talk about the bees bringing the rain...? Well, that's just the dementia talking. Isn't it?

* * * * *
I loved the juxtaposition of the harsh desert world, with the challenging family relationships, and the verdant peace, beauty, and harmony of Serge's stories. As the story moves forward, the two begin to the blend and merge at the edges in unexpected and poignant ways.

Immerse yourself in this world of magical realism for a couple of hours and come back up, refreshed.

Have you read any good magical realism lately?
Posted by Linnae at 7:00 AM