We have been letting the chickens out almost every day, now that the weather has warmed up, to roam around the yard--pardon me, to free range.
They are quite docile and so far have rarely even ventured to the other side of the yard, let alone attempted to fly over the fence. That is good, because we haven't clipped their wings. 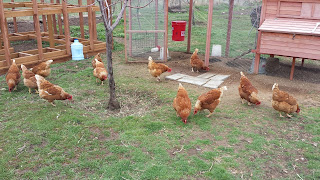 So what happens when the gardener decides to do some weeding while the chickens are out? 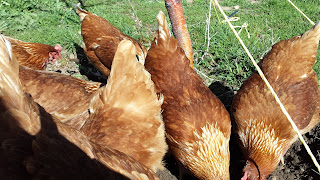 No fewer than 6 chickens come running straight over!
They park themselves right in front of where I'm working and get busy looking for worms, scratching the dirt, jumping into my weed bucket, and eating weeds out of my hands.
Also, pecking at my gloves. 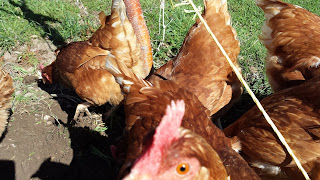 It's a little hard to get anything done, but it's quite entertaining, so I go with it. 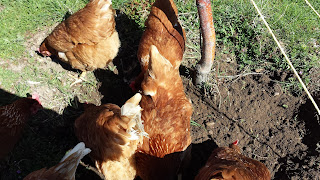 Every now and then I push them aside so I can dig up a few more weeds.
They come right back over as soon as they see me turning over the dirt.
If one gets a worm and another sees it, the first one takes off running, with 3 of 4 chasing after her.
It's so funny!

When it's time to let them out, they can hardly wait and all come crowding out at once.
Once they've been out for an hour or two, they're much more content to stay in the coop once we put them back. They've had their exercise, I guess, and are ready to go back.

We're still averaging nearly a dozen eggs per day.
We will probably never make back in eggs the money we've spent on feed and equipment, but I have to say entertainment value is pretty high on the list as well.
My kids pick them up and carry them around all the time.
So that's something.

No names. They all look so much alike we can't tell them apart anyway.
We've decided our next batch of chicks (whenever that comes along) will be a different breed, so we can at least tell apart the older ones from the younger.
Posted by Linnae at 10:57 PM

Email ThisBlogThis!Share to TwitterShare to FacebookShare to Pinterest
Labels: chickens