Here in the heat of midsummer, it has become apparent that various and assorted plants that were assumed to possibly still have a spark of life, are actually stone dead. Yup. It’s time to pull out those quitters and put some things in that will actually thrive! (We hope.)

My plan today was to do just that. Everywhere in the yard, orchard, garden, etc. However, as such plans tend to do, this one went a bit awry. I got sidetracked deadheading roses, chopping back catmint, weeding the front flowerbeds, and planting that one lone geranium that has somehow survived without watering in its pot since May. (See! Now THAT’S the kind of perseverance I want to see more of around here! Good job geranium. Props to you. You got a pot all to yourself just for that.)

So, for my own record-keeping, here’s a list of what I did, and what I still need to do. 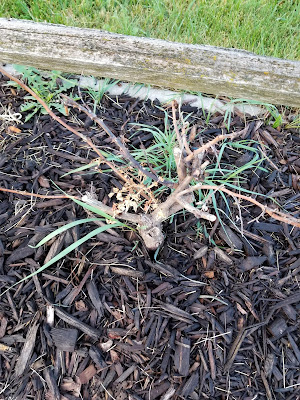 Bonus! It was much easier to get all that grass out of there once the dead rose was gone. 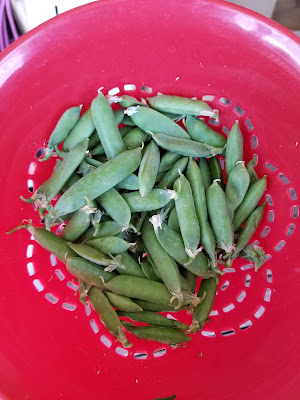 Yummy peas. These were from a couple of weeks ago. Today’s were not nearly so delectable. Trust me.

I am toying with the idea of starting some peas now for fall. I have never attempted a fall crop of peas before, because usually by fall I’m ready to put the garden to bed. Have you done it? Do you recommend it? I really do love peas fresh from the garden, so maybe just maybe it would be worth the end of season work.

Okay, so there were only 2 today. Hey, 2 is better than none!

Headed for the Chopping Block

We never even got any cherries from it—the cheapskate! Teasing us with the possibility of cherries, only to snatch that dream away. Four words for you, cherry tree: Goodbye and Good Riddance!

I still want cherries, so I am scouting out a different location for a new tree. Maybe somewhere in the front, across from my pie cherry tree. Also, no fancy grafted one this time. That tree was supposed to have 2 different varieties on it, but the trouble all started with the graft. Even before the aphids, there was a deep crack that had buggy webbing inside it, right at the point of the graft. That could not have been good.

Also, the front oval bed that looked amazing this spring is a mess right now. It needs some major help and attention. Mostly, I think, it needs some summer bloomers to fill in the gaps and help compete with the weeds. I’m thinking ‘Cheyenne Spirit’ echinacea, if I can find it this fall. Guillardia would work too. It’s got a few roses blooming, and the ninebark looks fantastic, but most of the rest is just an eyesore—to put it plainly. It is.

So round about next month I’m going to—what, you thought I was going to jump right on that this week? HA! I do not plant things in July. Not ever. Anymore. I have learned my lesson good and hard on that point. Do I seem like the kind of gardener that will baby something through a hot spell? Anything I planted this month would likely need to be watered a couple of times a day, even to survive. No thank you. Not doing that. I know myself well enough to know that it would not happen. So, like I was saying—mid to late August, early September. Target dates for planting a few more things. On it.

Now a break for Thoughts While Weeding:

I pulled up 2 goathead thorn plants in my vegetable garden today. I actually pulled up a couple of them yesterday, too. If I didn’t know what they were, boy would I have been fooled! They were not at the thorn-making stage yet, just a pretty little plant with tiny yellow flowers. There is no indication, at this stage, that the thorns these things produce will puncture bicycle tires, go straight through leather gloves and stick in the soles of your shoes, only to come off in the carpet later and cause serious damage.

Recognizing them for what they were, I immediately pounced on them and tore them out. They may not have gotten as high a priority if I didn’t know their true nature.

Is there something else in your life that is like that?

I’m going to just let you ponder on that for a moment.

Deep thoughts from the thick of the weed patch. 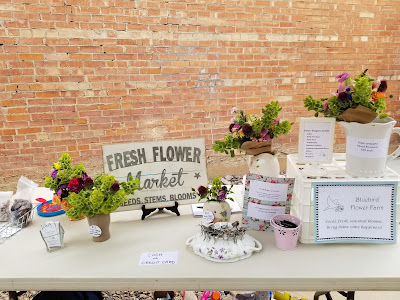 My son sold polished rocks, there on the left. I sold fork bugs, mixed bouquets, and a few vase arrangements.

Hmm..what else should I tell you? Oh, I did my first Farmer’s Market here in town last Saturday. It was a lot of fun! I sold a few things, got to hang out with my oldest son for a few hours, and met some nice people—some of them my neighbors! I even got 16 people to sign up for my email list. I had decided the day would be a success no matter how much I sold if I could get 10 signed up. Success! Now to get them added in to the computer. In fact, that may be the next thing on my list tonight.

Also, I met with my niece to walk about Wedding Flowers! So excited! She wants mostly silk flowers, except for her bouquet and groom’s bout, the table centerpieces, and the cake flowers. Since I haven’t done as much with fake flowers, it took some time to sit down and price things out. I did that, and got her estimate sent off, so whew! Even put in a preliminary order for some of the stuff I know I’ll need. The wedding is next month, so there’s not much time to lose! Her colors are going to be pink, blush, peach, and pops of coral and gold. It’s going to be so pretty!

p.s. I couldn’t bring myself to pay for fake carnations. The cheapest ones I could find, by the time I added on shipping, were still more expensive than real! My new plan is just to add in real carnations to the bridesmaids bouquets. I’m not sure how that will look, but it’s what I’m thinking.

So, how was your week?