This would be a good one for book club! 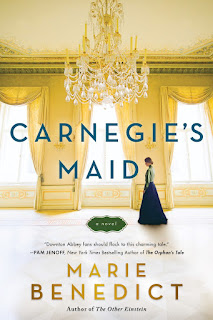 3.5 stars: Upstairs, downstairs, and a bunch of secrets to hide.

Clara Kelley is the oldest daughter in a family of tenant farmers in Ireland. Though they had big enough acreage to survive the Potato Famine, their family lands are slowly getting chipped away by the landholder, who disagrees with her father's political views. So she is sent off to America to earn money to send back to them.

As she finally gets off the boat and is beginning to make plans to find a second cousin, she hears a man calling her name. She ignores him at first--it is a fairly common name, after all--but after some time passes and no-one has responded to his calls, she decides that this could be a Chance. He is obviously wealthy (she is obviously not), but the other Clara must have not made it through the voyage if she hasn't answered yet.

So Clara takes on a new identity, with the same name. She is now from Dublin, Protestant (NOT Catholic), and slated to be a lady's maid to a Mrs. Carnegie. She manages to bluff her way into the position using her wits, brash courage, and determination. Then she has to figure out how to make herself indispensable and keep her secrets buried deep.

Meeting the older son of her lady, a Mr. Andrew Carnegie, may be the undoing of everything--if she lets her guard down.


* * * * *
This one was touted as great for fans of Downtown Abbey. Actually, I have never seen that, but I did still like this book. Clara was a survivor and as such, she did what she felt she had to in order to provide for herself and her family back home. That included taking this other girl's identity and running with it. She would never have succeeded (where many other, better qualified girls had failed) if it hadn't been for her quick mind and ability to figure out what her employer needed.

Was it right for her to do that? No, probably not. I could see where she was coming from, though. I think this would be a great one for a book club discussion, so you could really get into the ethics of it. Her family probably would not have survived without the money she made from this job and sent to them. Living a lie vs. saving her family....read it and tell me what you think!

The romantic side of it was interesting. Probably realistic in most respects. I appreciated that she kept it clean. The portrayal of Carnegie himself made me want to find a nonfiction biography to dive into for another perspective. He is always courteous and a gentleman to Clara, but it does show some of the uglier sides of his personality in his business dealings. Which was the true man?

Anyway, I liked it.


Content: Clean, despite an insinuation in the beginning that had me wondering.