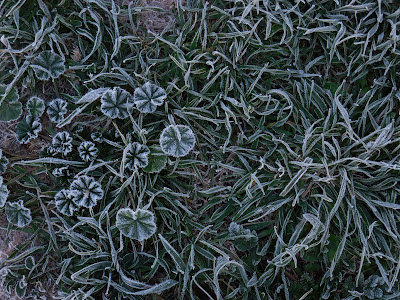 Frosted mallow in the grass. The round, veined leaves are quite distinctive and easy to identify.

This weed has been on my mind this week, as I spent a good portion of the day last Saturday attacking it in my garden. So let’s talk about it a little more, shall we?

It’s a native of Europe, but has now become naturalized throughout the United States. It is edible—my kids like to eat the little round fruits—they’re maybe 1/4” in diameter. They resemble a wheel of cheese, hence the other name for this plant “cheese weed.” You can eat the leaves, flowers, and roots as well, though I have never tried any of those.

It’s related to okra, and can be used to thicken soups and stews. One site says it releases “a thick mucus” when cooked. Boy, doesn’t that sound appetizing! Ha!

There are some herbal uses, but I can’t speak to those. You had better look that up on your own if you plan on using it to cure your ailments.

It is a cool-weather weed, so it will probably be one of the first you see in the spring and last in the fall—like now. We had some very very cold weather a couple of weeks ago, and the plants I was digging out last Saturday were still green and alive. So, kudos to you mallow (I guess.)

Here’s why it’s a garden pest:

It has a long tap root, and tends to hug the ground. Those roots are tough to get out, even in my sandy soil. If you let it grow much bigger than—well, tiny—it’s going to take a shovel to dig it out. Since I don’t tend to weed with shovel in hand, this is one that tends to get neglected, until it has sprawled over 2-3 feet of ground and has become such a nuisance that I’m forced to deal with it. Interestingly enough, it’s scientific name is Malva neglecta. I can see where they came up with that one!

The good news? It is annual or biennial, so all those little sprouts that you pull out or bigger plants that you dig out will truly go away—probably.

It’s supposed to be very nutritious, so I guess I should have been harvesting all those leaves for my salad—assuming we could get past the mucilaginous texture and everything. Hey, I guess it’s another one (like purslane) that makes me feel slightly better about the amount of food produced in my garden this year. It wasn’t very much, but at least I had some nice, healthy stands of mallow growing!

Also, note to self: next year have my kids harvest all the mallow fruits that they can find—nutritious snack (apparently) and fewer mallow next year! I’ll take it!