The Advantages of a Clean Slate 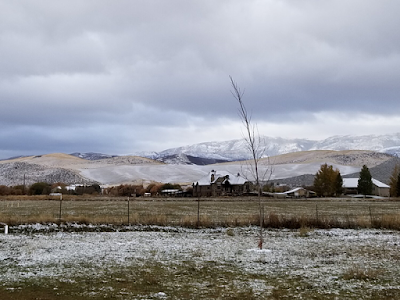 To take a break from my website redesign this afternoon, I went outside into the balmy 45 degree weather. I began to put away things that had been left out on the deck most of the summer—my toolbag, my plastic totes for holding weeds. That led me to the greenhouse, where such things will be stored until spring, and THAT reminded me that I still had some cleaning up to do in there, as well.
This year, I primarily used the greenhouse for transplanting seedlings. As it was unheated, I couldn’t do my full propagation in it. I spent some very pleasant hours in there, potting up seedlings into peat pots and getting them ready for bigger and better things.
The world was rosy (but then, it usually is in the spring.)
Then that late frost came along in mid-June. Many of my seedling-related hopes were dashed, and the seedlings themselves turned dead and black. I was so discouraged. I managed to move the trays full of dead tomatoes and peppers, and assorted flowers, into the greenhouse, but that’s as far as I got.
There they stayed all summer long.

Now here we are, 4 1/2 months later. The sting has gone out of the failure, for the most part. It was time to clear things out and get ready for a clean start next spring. With the help of my 2 year old, I dumped peat pots full of dirt and dead seedlings into the garden, then ripped up the pots themselves and put them into the compost bin. (She had great fun with the ripping!)

I stacked plastic pots of all sizes, then found more in other trays that needed stacking. I emptied the 2 large cement mixing bins, stolen from my husband’s outside projects, and used for soil recipes. That dirt all went into the garden as well. Trays warped by the sun beyond reclaiming, and various plastic containers I had saved from the recycling bin and used for seed starting went back to the recycling bin.

As I cleared away the evidence of my many failures, my mind began to clear a little bit. I could let go of those disappointments. The neat stacks and empty shelves seem to give a sigh of relief right along with me. Time to move forward. Perhaps next year I will be able to learn from my mistakes without holding on to their remains.

All together it only took me about and hour and a half. Another chore checked off the “Get Ready for Winter” list; a clear workspace, and a clear mind to move forward into next growing season.