Out with the Old: Garden Cleanup

After weeks and weeks (and weeks) of rain or snow, with cloudy skies, we have had some glorious late winter sunshine!

With spring just around the corner, that means it's time to finish cleaning up the flowerbeds and garden. I leave many dead flowers and stems to overwinter, to give the wildlife--including bugs--a little extra shelter. Now that it's warming up a little bit, it's time to finish pulling out or cutting back all the dead foliage. 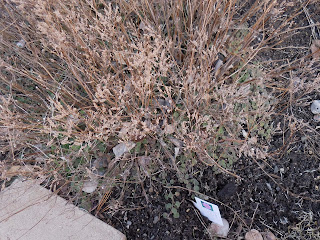 This is the oregano in the vegetable garden.
It is in desperate need of a haircut!
[Bonus: those dried stems smell amazing as you snip your way through.] 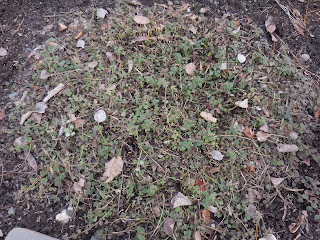 Ah, much better.
This is now the 4th winter that the oregano has survived.
I even hacked off several large bits of it and gave them away 2 years ago, and it's still going strong.
Love it! 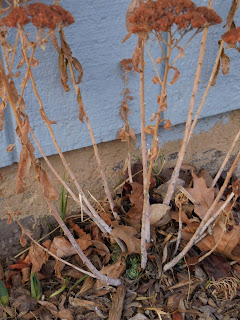 This is the sedum from my back flowerbed.
The best part is that you can see the new shoots at the bottom.
The promise of spring! The hope of new life!
By the way, if you need a tough plant for a dry sunny spot, sedum is great!
The fleshy leaves hold in moisture, so they don't need very much water at all.
I got these as starts from a neighbor.
Being right there by the house, they don't get any rain, and only as much water as I remember to give them....which isn't much.
They still thrive and bloom; and are usually one of the last spots of color in the fall.
I like the look of the dried seedheads throughout the winter, as well. 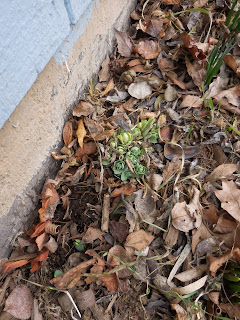 Now it's all cleaned up and ready for a new season!
I went ahead and got the rest of the back flowerbed cleaned up while I was out there.
I am sad to report that my 'Yellow Topaz' rose did not make it.
It was already ailing at the end of the summer last year, but I had hopes it would rally.
No such luck.
The branches were lying flat on the ground and broke off at the base when I tried to pull them upright again. Darn! I'll have to dig out the stump and figure out what else to put there.
On the bright side, I have daffodils and tulips peeking up!
Come on spring!
[What spring fever?]
Look! We have a visitor: I wish I knew what kind of cocoon this was.
It's just stuck to the house, about 3 feet off the ground back there.
If the weather holds over the next few days, I'll get the other flowerbeds done as well.
I did quite a bit of clearing out last fall, more so than usual, so the job should be fairly quick this time around.  I could wait longer to do it, but the smaller the new shoots are, the easier it is.
Besides, it gives me a reason to soak up some more sunshine!
I've also got some pruning to do, but I'll put that in its own post.
Do you get spring fever? What is enticing you outdoors right now (if anything)?
Posted by Linnae at 8:00 AM