So, about 5 years ago, I got this great idea that I was going to take my gardening to the next level. Oh yes. It was time to take on a new challenge.
I was going to grow my own plants from seeds!
Bring it on! Cue the trumpets!
Guys, I made so many mistakes. 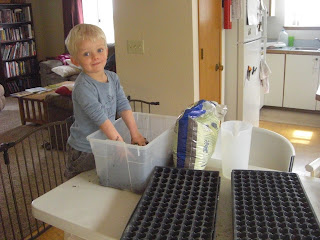 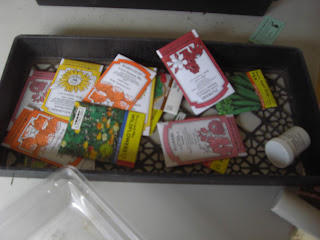 I was ready! (or so I thought)
I quickly realized that filling up both of those trays would be akin to madness, so I only used one. And that one I cut into smaller sections that would fit on my windowsill.
I put folded up paper towels under them to catch the runoff, and hoped for the best. 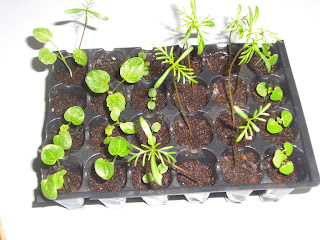 And also...oh dear.
I realized I would actually need a separate container for each one of those plant babies.
This container alone required 24, and I had 3 more just like it waiting in the wings. 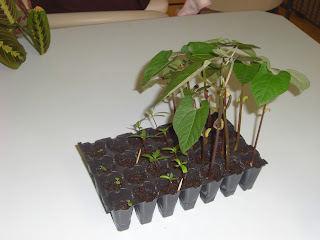 Boy, those beans got tall in a hurry! 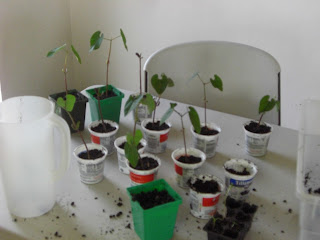 Leftover 4-inch pots, recycled yogurt cups; I was grabbing anything I could get my hands on...and still I didn't really have enough containers....or space on my windowsill.
Especially since it was still APRIL, and none of those lovelies would survive outside on their own until end of May or even early June.
The beans got passed off to the basement windowsills, filling both of them,while the flowers stayed upstairs in the kitchen. Playing favorites was allowed, right? 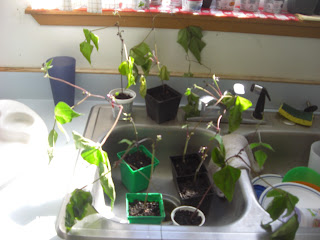 This was my attempt to revive the beans, which had only been watered about once a week--yet surprisingly, were still hanging on...at least some of them. 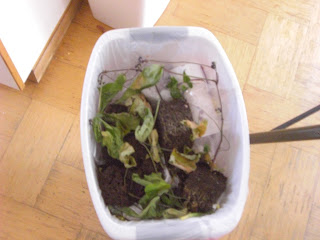 The final resting place of at least half the beans.
[This was pre-compost bin.] 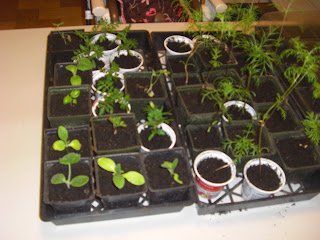 These ones, under my watchful eye on the kitchen windowsills, fared a little better.
Then it was time for stage 3: hardening off.
Time to toughen up those delicate little seedlings, so they could survive Life Outside. 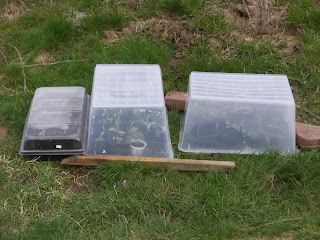 Lacking cold frames, a greenhouse, or anything remotely helpful along those lines, I made do with what I had--big plastic bins.
Hey, they worked--mostly.
I just had to be sure and prop them open or take them off on sunny days, so as not to cook the poor little darlings, then put them back on and weigh down all the edges for those cold frosty nights...for 10 days.

It was finally time to actually plant these in my garden. 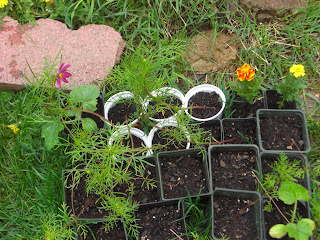 The marigolds were looking great!
Cosmos, a bit floppy. The rest--eh, somewhere in the middle. 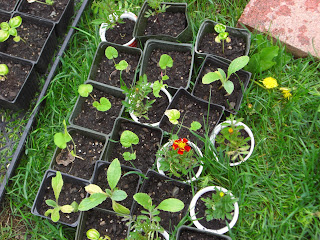 I got some of them in the ground, but before I could get the rest planted, we went on vacation for 10 days. The ones I didn't get into the garden, I just planted in one of those bins. I knew it didn't have drainage holes, but I figured maybe that would help them not dry out while we were gone.
Can you see what's coming?
As it turned out, it rained several times while we were gone, and by the time we got home, they were basically floating.


1. Space
Starting seeds takes some elbow room! Especially once the seeds have sprouted and it's time to pot them on to their next size container. Preferably, space where you can see them every day and remember to take care of them! (R.I.P. beans.) Which brings me to #2.
2. Time
I don't think I realized that I was signing for a marathon, not a sprint, particularly starting in March. Small amounts of time over weeks and weeks add up. If consistency is going to be a problem (my hand raises), well...that could be a problem.
3. Equipment
Considering what I had to work with, I'm impressed that I got what I did out of this whole experiment. Since then, I've read up on it a bit more. If you want strong plants, a sunny windowsill isn’t going to cut it. You need some grow lights. Preferrably lights that you can move up and down, so that they can stay a few inches above the seedlings as they grow. Your new plants will need anywhere from 12-16 hours of strong light per day.


[And of course, lights take even more SPACE. Plus an outlet. Just thought I'd throw that in.]

A warming mat is optional, but is supposed to be very helpful for germination. Also, I've read that air movement from a fan helps them grow stronger, and helps cut down on mold problems. [More space! More outlets!]
Then you have to consider how you plan to harden them off. Some people cart them in and out of the house every day (not for me), but even a simple DIY cold frame would be better than my plastic bin method. Of course, if you have an unheated greenhouse, you're already golden.


4. Garden space/cost
While my garden seems big to me, it's not a farm. I have room for 2 pumpkin plants, tops. I might put in 10 tomato plants, if I'm planning to make salsa that year. Most seed packets have anywhere from 25-100 seeds in them (or more!) So buying a packet to use 3 seeds doesn't make very much sense to me. Plus, after all that hard work to keep everything alive, you have to have space to plant it outside. Otherwise, what's the point?
This is actually my biggest reason for not starting seeds now.
There is cost to consider as well. The packet costs about as much as an individual plant from the garden center. Unless you're buying the seeds locally, though, you're going to have to pay shipping and most likely make a minimum order. Don't forget to add in the cost of your equipment, if you're just starting out.
Then there's the cost in time and effort to factor in. For most vegetables, it's simply not worth the weeks of effort for me, particularly when the results could be derailed by anything from sick children to vacation plans in early June. I would rather just buy the plants. Let the garden center worry about keeping them alive until I'm ready to plant them!
5. Growth rate
Seriously, what was I thinking starting beans in March?!  Or starting them at all, for that matter. Some plants don't need to be started early. You can plant beans at the end of July and still get a harvest in before frost. Corn does fine, if you get varieties suited for your growing season. Cucumber and zucchini could be started inside maybe 2-3 weeks ahead of time, or not. I've had success planting them as seeds directly in the garden.
Even pumpkins, which take a good 16-19 weeks from seed to harvest do fine starting out in the garden, because they don't mind the frost. So when most things are done, they hang on ripening up into October.
Tomatoes, peppers, eggplant, some flowers--those require a good headstart of 10-12 weeks. Most of the rest, not nearly so much.
* * * * * * * *
So, don't make my mistakes.
Go forth and grow all the seeds!
As for me...

Will there be a next time? 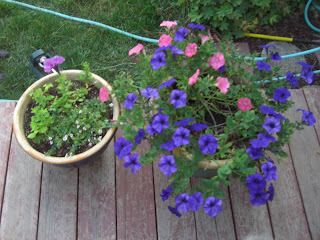 My home-grown petunias were lovely.
Yes. I'm certain there will be, although it will probably not be this year.
Also, next time around, it will most likely be all flowers; it would be nice to give my cutting garden a headstart.
[Flowers forever and ever!]
Have you ever grown seeds indoors?
What was your experience with it?
Posted by Linnae at 8:00 AM