He Said/She Said: Fairytales from the Guys' POV


Most fairy tales are written from the perspective of the girl, whether she be princess or servant. I guess it follows that most fairy-tale retellings, then, are from the female perspective also. Hey! Don't the guys get a say in all this?

Well, apparently there a few authors that think they do and they should. If you enjoy fairy tales or fantasy, give some of these a try--they're a lot of fun! 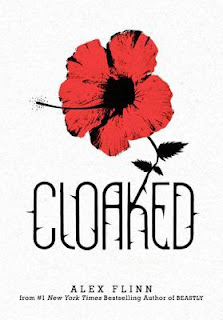 Johnny repairs shoes in a high-end hotel. He has his dreams--designing famous shoes being one of them. Possibly hooking up with his good friend Meg, another. His dreams do not include princesses, quests, talking animals of any kind, or magic. At all. And yet, somehow he gets tangled up in a quest (for the hand of a princess) to restore a talking frog (the princess' brother) to his rightful family and form. He is given a magic cloak to help him. Which turns out to actually work.

Fun, fast-paced. I especially liked how several fairy tales were woven into the plot. Each added to the main plot, but also lent additional dimension and richness, as their backstories became intertwined with what was going on. 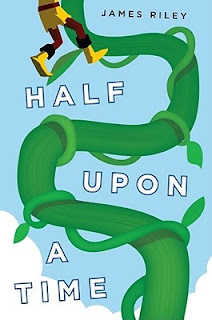 4 stars: Delightful, with a side of sarcastic wit.

Jack has problems, like his grandfather's insistence that he rescue a princess when there are none to be found, for instance. Then a princess literally falls from the sky, and whether she likes it or not, she definitely needs rescuing. Figuring out who she is (could her grandma really be Snow White, or what?) and getting to the bottom of the whole situation is going to be an adventure for all involved.

A mashup of all sorts of fairy tales, Riley's quick wit and deft turn of phrase had me laughing in several parts of this book. The "modern girl dropped into a fairy tale world" theme worked very well here, because we got it all from Jack's point of view, with plenty of sarcastic exchanges between the characters. Along the way there were close shaves with giants, witches (and their children), and a wolf.

It did leave several loose ends to tie up, but it is the first book of a trilogy, so I suppose that's to be expected. 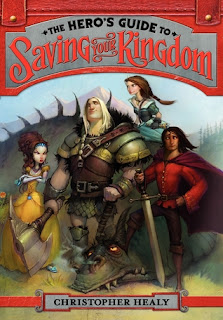 The Hero's Guide to Saving Your Kingdom (The League of Princes #1), by Christopher Healy
Illustrated by Todd Harris

The story of 4 Prince Charmings--wait, Princes Charming, none of whom got the press they deserved after their princess encounters, no thanks to the bards. When several of the bards go missing due to an evil witch, however, these heroes decide it's up to them to save the day, the bards, and the princesses too.

It will take all their skills--meager though they may be--to come out on top. Or at least, on top-ish. Depends on your definition.

The Princes are all just a little bit off in very funny ways. Prince Frederic is afraid of his own shadow, but manages to get himself out on an adventure when Cinderella runs off out of sheer boredom. Prince Gustav has a chip on his shoulder the size of a castle, and most of all wants to prove to his big (huge) older brothers that he is hero material--despite what Rapunzel may say. Prince Liam is actually a hero and has the sword skills to prove it--too bad Briar Rose is terrifyingly awful. He has to ditch the kingdom before things get really ugly. Then there's "wild card!" Prince Duncan. Prince Duncan is actually already married to Snow White, but he's like Tigger in human form--just so bouncy and random that Snow needs a bit of a break--so off he goes, as well.

I thoroughly enjoyed this and am looking forward to the second. My husband even read it and thought it was funny! Whoa--that hardly ever happens! (Our reading preferences don't tend to overlap much.) 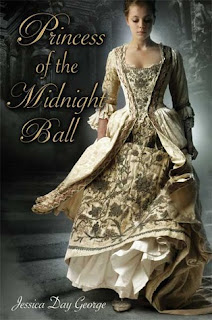 Princess of the Midnight Ball, by Jessica Day George

5 stars: Precisely what a fairy tale should be.

Galen, a soldier orphaned by a long and terrible war, seeks out his relatives and finds that his uncle is the Royal Gardener. He takes a job in the Palace Gardens, and comes to realize that something is amiss in the castle. Something very simple--worn-out dancing shoes--seem to be a sign of something much worse. Perhaps even a curse. Even though the King posts guards and locks their rooms, the 12 princesses wear out their slippers dancing every night, even through an illness that leaves them scarcely able to leave their beds otherwise.

To save his daughters, King Gregor decides to see if potential suitors from neighboring kingdoms can figure out the secret that his daughters can't or won't divulge. One by one the suitors fail, and incredibly, die within the month of returning to their homes. Before long, a cry of witchcraft has reached the ears of the Archbishop, and rumors have circulated the streets of Westfalin. With the deaths of the princes, the fragile post-war peace is strained at best, and an investigation from the Archbishop has his own people rioting in the streets. The King is at his wits' end--and his daughters are not faring so well either. Galen believes he may be able to find the answer, and out of desperation the King allows him to try.

Galen's task is made easier by certain magical artifacts that have made their way into his possession, his love for the oldest princess Rose, and the fact that he can knit.

Enjoyable and satisfying, with solid world-building. Imaginative within the structural confines of the fairy tale. 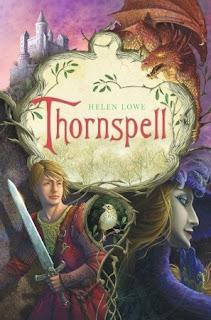 4 stars: How a prince becomes the hero of his own story.

The Sleeping Beauty tale, retold from the perspective of the Prince who rescues her. As in the original, there is a good fairy and an evil fairy, a curse, a castle full of sleepers surrounded by thorns. But this is Prince Sigismund's story: how he grows up and learns to take control of his own destiny.

Believable world-building. I especially liked the ending--the part after he wakes her up. 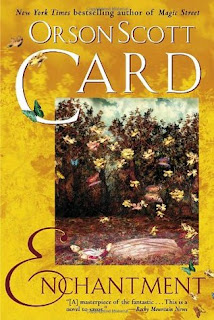 4 stars: Magical blend of Sleeping Beauty and Russian fairy tales, with a bit of real world mixed in there, too.

Ivan is just a boy wandering in the forests of Ukraine near his cousin's farm, when he first encounters the clearing, and his memories of it are fleeting: a beautiful woman sleeping on a pedestal, her face and body obscured by leaves; then something coming closer and closer to him under the leaves, something sinister. Although he runs before the creature, whatever it was, can reach him, the memory of it haunts his dreams.

His family moves to America, and he grows up, becomes a decathlete, graduates from college, and even gets engaged to a bright young co-ed named Ruth. When he thinks about the clearing at all, he is certain it never really existed after all--the woman and the creature some way of working out his boyhood fears as his whole world changed. The theory doesn't explain the vague sense of unease that still accompanies the memory, but it suffices. Until he goes back to Russia for research on his dissertation--he's studying the origins of folktales--and on a whim takes a side-trip to his cousin's farm.

The clearing does exist, just as he remembers it. What's more, this time he is ready to do something about it. He may not be ready for what happens when the sleeping princess awakes.

A Sleeping Beauty tale with generous doses of history, realism, and folk-tale mixed in. "Happily ever after" may be within reach, but there will be more than one bridge to cross first.

My book club read it and had a great discussion about it. I would say it's more for adults, due to the content (see below).


This post is part of the Literacy Musing Mondays linkup. Head over there for more books to read!
Posted by Linnae at 8:00 AM