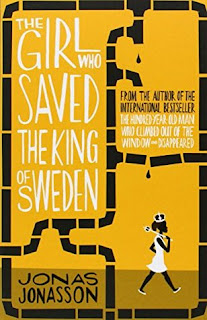 
Nombeko Mayeki is born in the slums of Soweto, and against all odds, manages to rise in life rather than succumb to the toxic mix of drugs, despair, and disease that surrounds her. Her exceptionally keen intellect helps, as does her ability to notice when her particular talents could be put to better use. As a teenager, she becomes the de facto head of her workplace. As a young woman, through a fateful misstep, becomes an indentured servant in a top-secret military facility.

It is here that the story really begins. For it is here that her ability to speak multiple languages and understand the intricacies of advanced mathematics (all self-taught) allows her to build a few important relationships--some friendly, some purely business.

When South Africa decides to dismantle the 6 atomic bombs it has made, Nombeko is one of the few people in the world who knows about a 7th. She sees in this information a possibility of escape from her menial prisoner-like job and living situation. Unfortunately, 2 of the other people that know about it are from the Israeli Secret Service, and they're not about to let her (or the bomb) out of their sight for a single second. Until she outsmarts them and heads to Sweden (the bomb comes along--accidentally.)

The rest of the story unfolds from there, with many twists and turns of the already complex plot.

Content: There are a few non-graphic sex scenes, and one character in particular is so foul-mouthed it's hard to read the scenes where she is present. She is not a main character, thankfully. Some violence, also.

There are many ways to talk about this story. It is a string of luck, opportunity, and crazy coincidences. It is many small choices that lead to something very big. It is several individuals, each with a unique and checkered past, whose lives intersect in surprising and satisfying ways. It's a revisionist history.

I read it back in January, and it has taken me this long to figure out how to talk about it without just telling the whole story from beginning to end. Instead of that, I'm going to focus on a few of the characters. As it has been 3 months, I don't remember all the names. Hazards of waiting, and all that.

Nombeko is the heroine, in every sense of the word. She's very very smart, she's patient, she helps others--sometimes for her own gain, but even when there's nothing in it for her. She's resilient. She can see the big picture. She wants to do the right thing, even it ends up taking the rest of her life (which it may...)

Then there are 2 brothers--identical twins--who officially are 1 person. Their parents were very anti-royalty and also didn't like being told what to do. So with all the official forms, they only filled out one--including birth certificate--and then when school came along, the boys would take turns going. The official brother is a blockhead, who is always jumping into things without thinking and causing all kinds of trouble. The "not officially a person" brother is smart, rational, and steady. He accomplishes quite a bit in his brother's name, actually.

There's also a war veteran with PTSD living in an old pillow factory, there's a very angry girlfriend (she of the foul mouth), there's the 2 secret service agents who refuse to let Nombeko get away with her scheme--even years later, there's a King who would actually prefer to be a farmer, and there's a baroness who actually is a farmer. And there's that bomb--it's practically its own character by the time all is said and done.

All of these different elements are skillfully woven together to make a novel of great complexity, with each outcome turning on such small hinges its almost hard to believe. Yet, somehow, I wanted to believe it was true, every word.
Posted by Linnae at 8:00 AM