How to Dry Oregano

Drying oregano is usually a June project for me, but it needed to be done in May this year.
Generally, you want to do it before it has blossomed.
I usually do mine in our dehydrator in the interest of time, but you can also hang bundles up in a warm, dry spot to dry.

So, here's what the oregano bush looked like in the garden. 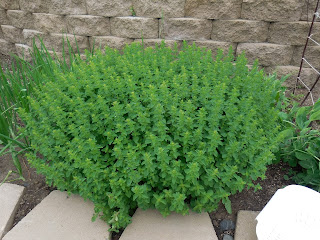 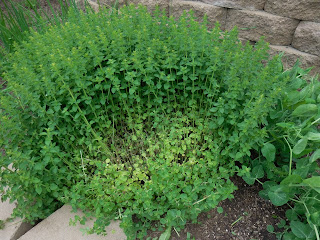 Just whack it off!
No need for precision here.
Just grab big handfuls, and snip away.
(My kiddos loved this part!) 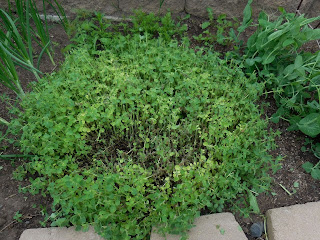 You generally want to leave the bottom 2 or 3 sets of leaves, so that it grows back again.
You can see there in front where my helpers got a little over-enthusiastic and cut it almost to the ground. Oops. 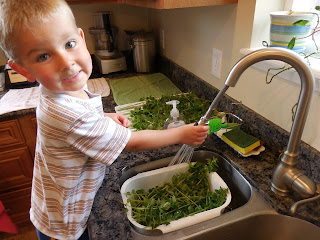 You can put it into the dehydrator wet--it will just take a lot longer. 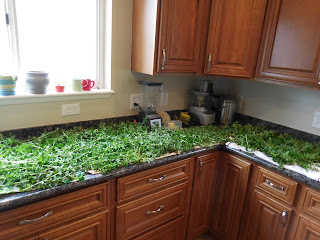 We had a forest on the counter!
We left it there for the morning. It was mostly dry by lunchtime. 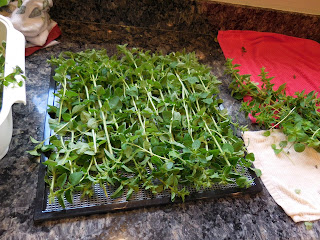 Remember these will shrivel down to practically nothing, so don't be afraid to stack them a bit.
Also, the stems and leaves make enough air pockets between them naturally that they don't need to be in a single layer.

The first time we did this, we stripped all the leaves off first and put them on the trays.
That took a couple of hours all by itself.
We have found that it is MUCH faster to just put the whole stems on and pull leaves off once they've dried. 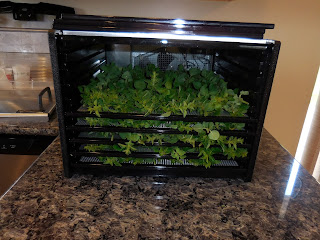 To get them to fit into the dehydrator, I had to push down the plants on the tray below, so that the one I was putting in wouldn't pull all the stems to the back.

Step 5: Follow the instructions for your machine and get it going!
Mine took about 6 hours at 125 degrees F.
I ended up doing 2 batches.

Step 6: Once they're done, it's time to strip off the leaves off and crumble them.
They should be so dry that they shatter easily.
If they're leathery at all, stick them back in for another hour or two.
The dried stems can go in the compost pile, if you have one.

Step 7: Store them in an air-tight container, like a glass jar with lid and ring. 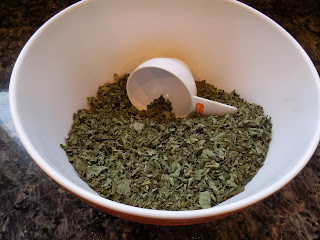 Or, if you still have a quart and a half from last year, (like I did), time to share with friends!

It does take some time and work, but compared to most preserving projects, it's not so bad.
My kids really liked helping. I packed the trays, but they helped with all the rest.
Plus, your house smells like oregano for an entire day!

I have found the homegrown, dried oregano to be much more potent than the store-bought stuff, even a couple of years later. Meanwhile, if you need fresh, the bush will recover within weeks.
By the end of the summer, mine is always covered in blooms (and bees).

Have you ever tried this? How has it turned out for you?
Posted by Linnae at 8:00 AM