Hello! We just got back from a very fun vacation and family reunion. All 10 of my brothers and most of their kids, were able to make it. We had a great time!

I'm excited to share this month's Featured Author with you.

Elizabeth George Spear was born on November 21, 1908, and died almost exactly 86 years later on
November 15, 1994. Although she only wrote 4 books for children and teens, 3 out of the 4 came away with Newberry Awards--2 medals and 1 Honor. Wow! She was a powerhouse! Her books are all historical fiction: 3 set in New England where she was from, and one set in Israel during the time of Jesus.

I found a few quotes from her that I enjoyed.

In case you ever think it's too late to pursue your dreams:
"I was born in Melrose, Massachusetts, on November 21, 1908. I have lived all my life in New England, and though I love to travel I can't imagine ever calling any other place on earth home. Since I can't remember a time when I didn't intend to write, it is hard to explain why I took so long getting around to it in earnest. But the years seemed to go by very quickly. In 1936 I married Alden Speare and came to Connecticut. Not till both children were in junior high did I find time at last to sit down quietly with a pencil and paper. I turned naturally to the things which had filled my days and thoughts and began to write magazine articles about family living. Then one day I stumbled on a true story from New England history with a character who seemed to me an ideal heroine. Though I had my first historical novel almost by accident it soon proved to be an absorbing hobby."

...and this is why she won so many awards:
"I have chosen to write historical novels, chiefly, I think, because I enjoy sharing with young people my own ever-fresh astonishment at finding that men and women and boys and girls who lived through the great events of the past were exactly like ourselves, and that they faced every day the same choices, large and small, which daily confront us."
--from NY Times obituary


It has been a treat reading or re-reading her books for this post. 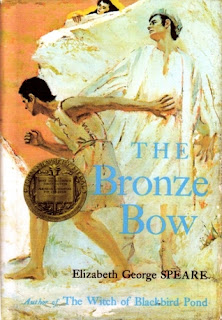 5 stars: Passionate hatred of the Romans clashes against Jesus' teachings of peace and love.

Daniel bar Jamin's hatred of the Roman soldiers in Israel motivates his every decision. He lives up in the hills with a group of outlaws and he is certain that they--and he--will soon call the regular citizens to arms, and their land will be cleansed at last!

Then one day, he chances to speak to a brother and sister from the village, up hiking (unwisely.) They remind him of all he has left behind; in particular, his grandmother, and his younger sister Leah, who has never been the same since the death of their parents. Reluctantly, he makes contact with them again, and with the death of his grandmother, is slowly pulled back into village life.

That doesn't mean he has stopped burning for Roman blood! On the contrary! He organizes a group of young men from the village who are just as eager as he is to fight. Meanwhile, he provides for his sister, and occasionally goes to listen to a new rabbi--a carpenter, Jesus of Nazereth. He is confused by Jesus' message, though. It is not one of rising up against the Romans, but one of coming right before God--yet He claims to be the Messiah. How can He be the Messiah if He will not deliver His people from their oppressors?

This book has been a favorite of mine for a long time. I remember reading it in High School for the first time and loving it back then. I was glad to revisit it after all these years. It is just so good!
Her portrayal of Jesus strikes close to what I think He must have been like.

Daniel is a likeable character, despite his temper, who learns and matures as time goes on. He also steps up to take care of his family duties, even though he would rather be almost anywhere else. He's a loyal friend and has a kind heart--a "soft streak" the outlaw king Rosh calls it. A detriment to being a bandit, but probably what allows him to open his heart to Jesus when the time is right.

I also liked how Speare shows both sides of many issues. One small example: Daniel remembers the village as being dirty, poor, and full of nosy neighbors. However, once he lives there, he realizes there is kindness as well, selfless giving to help others, and a willingness to accept him and his sister for who they are. A more important example: she doesn't show the Romans or the Jews as being all good or all bad, but mostly somewhere in between.

The ending was pitch perfect. Just--so good! I find I'm reduced to repeating myself. If you haven't taken the time for this one yet, go get it!

p.s. I finally just now figured out which scene the cover portrays. Ha! 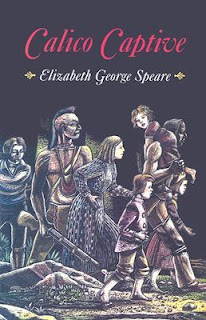 Miriam lives with her older sister's family in Charlestown, New Hampshire. Relations with the Indians have been uneasy, but there hasn't been trouble in several months, so the family decided to move out of the fort, back to their own little cabin a few hundred yards away. She's just getting to know a very promising young man named Phineas.

Then the raid happens. Eleven Indians kidnap the entire family, plus a neighbor in the wrong place at the wrong time. Miriam's sister Susanna is a month away from having her 4th baby, but that doesn't slow down their pace much as they march through the wilderness, fording streams and sleeping out on the ground. Then Susanna has her baby--a little girl they name Captive--on the trail. It seems for now their captors mean to let them live.

Eventually, the family is split up and some--including Miriam--are taken to Montreal, Canada. Miriam has to adapt to constantly changing circumstances and do what she can to get her family back together again.

Based on a diary of the account written by Susanna in her later years. I can see why this one doesn't get promoted as much as her other two. It's still a great story, well-written. It is not at all politically correct.  Speare talks about the hostility of the Indians, the squalor and poverty of their camp, etc., all of which were probably pretty true to what a white colonist woman would see and experience in such a situation.

That being said, I admire the evenhanded way Speare treats both sides of the history. Though Miriam cannot see or appreciate it, Speare puts in a few things about the Indian people that are positive, such as the way they share their food equally with the captives, and so on. In Montreal, a place that Miriam has always held in terror as full of wickedness and Catholics, she comes to find some true friends and many decent people, as well.

I didn't like it as much as her others, but I'm glad I read it. This actually makes me want to read the diary itself!

p.s. Maybe it would get a wider reading audience if someone re-did the cover! I'll bet most teenagers or kids would take one look and pass on by to something else. 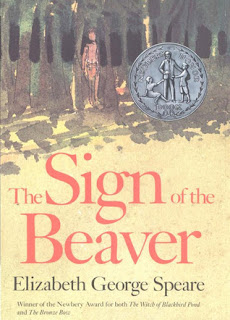 4 stars: A boy survives on his own and becomes a man, with the help of a new friend.

When Matt and his Father claimed their homestead land, they had to leave behind Mother, Sarah and the new baby who would be born while they were gone. Now that they've gotten the land cleared and a cabin built, it's time for Father to go back and bring the rest of the family, leaving Matt on his own to keep watch over their land. He's nearly 13 and knows how to use a gun, so at least he won't starve.
He's notching sticks for each day his Pa is gone. They should all be together again in about 7 weeks.

Everything is going pretty well. Then a stranger comes along and steals the gun. Slowly, Matt begins to run out of supplies and the summer wanes, but still his family has not returned. Then he meets an Indian man and his son. They agree to an exchange--Matt will teach Attean to read and write English, and they will bring him meat for his table.

Soon the boys develop a wary friendship, as Attean teaches Matt the native ways of survival and living off the land. As the winter sets in, Matt has to decide if he will join the Beaver clan or wait it out for his family, who have still yet to show up.

This was a new one for me, and a quick read. Matt is strong and resourceful, but it was Attean who was the more skilled. It took Matt quite a lot of effort to win Attean's friendship and respect, but he managed to do both.

Of all four, this one could probably go the youngest. In fact, my 8-year-old just finished reading it. He really liked it, too! 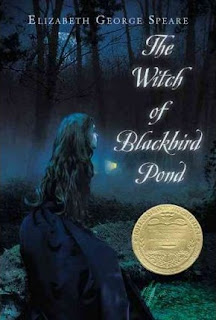 Kit is an orphan from sunny Barbados, headed to New England to live with her aunt and uncle. The only problem is they don't exactly know that she's coming. She grew up on stories of her mother and her aunt, and knows that they loved each other and were great friends--at least, until her aunt married a Puritan and moved to America. She hopes they will welcome her.

On the ship she becomes friends with Nat, the captain's son, a dashing young sailor with a bit of a temper. She also gets to know a young Reverend-in-training, John Holbrook, who is going to the same settlement that she is bound for. Both men are unsure of what her reception will be onshore, but she brushes off any concerns. It will be fine. It has to be.


However, when she gets to her aunt's home, she is unprepared for the chilly reception of her uncle and the way her simplest gestures of goodwill--like sharing her dresses and clothing with her cousins--are taken as an affront to their rigidly simple lifestyle. As she somewhat uneasily settles into their home and the community, she soon attracts a suitor, and some enemies as well.

She finds a friend in an old Quaker woman who lives in a hut at the side of the meadows outside of town. Hannah has been accused of witchcraft, but Kit finds more acceptance and warmth in her tiny home than she has anywhere else. Unfortunately, their friendship cannot last forever. Once the townspeople find out, Kit herself will face charges of witchcraft.

Kit is a girl just trying to fit in. She was raised with customs and norms so different from her Puritan relatives that everything she does seems to either shock or anger them. Yet, they show her kindness, too, and do what they can for her when the chips are down.

Kit is a true heroine. She is vulnerable and makes mistakes, but she always has good intentions. She does her best to protect those who cannot protect themselves, and rather than growing bitter at the way she's treated, she shows kindness to others who have been marginalized like her.

Kit is not the only who grows and changes throughout the book. The other characters in the book are similarly complex in their motivations and aspirations. Like in real life, the book mixes boredom and fun, sickness and triumphs, danger and everyday living.

If you missed this one growing up, go get a copy!