This is another sentimental favorite from childhood. We moved from Idaho to Alaska when I was 8, and nearly every summer after that, we would drive our big old brown van down through Canada on the Alcan Highway to see family in Idaho and Utah. There was a box or two of things that always stayed in the van. You see, we lived in villages only accessibly by air, so the van had to stay parked in either Anchorage or Fairbanks all winter. Also, luggage was usually tight, so it was helpful to have some things that just stayed with the vehicle.

Amongst the pots and pans, there were a few books that always stayed in the van. This was one of them. Clocking in at nearly 500 pages, it was perfect for a long car ride. (Five 12-hour days in the car was no joke). Plus, it was good enough that it could be re-read every summer, which I did, coming up for air to sit on the cooler between the 2 front seats whenever I got too carsick. (Yes, this was long before carseats and seatbelt laws.)

Then life moved on, and I didn't read it again. Over the years I even forgot most of the plot. I still remembered it was about rabbits setting up a new home, and there was a lingering kind of cozy-happy memory there, but I couldn't remember much more than that.

So when I decided to give it another try, I wasn't sure what to expect. I have to say I was pleasantly surprised. 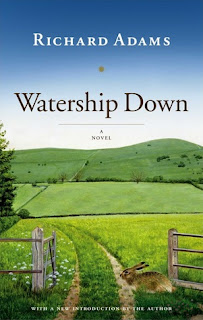 Hazel and Fiver are rabbits living in a warren next to a meadow. Fiver is somewhat of a seer, often having feelings or visions about things to come, especially dangers, that he can't really explain. He is always right. So when he begins insisting that they all leave as soon as possible, Hazel listens. They go to the Chief Rabbit, trying to convince him that everyone should abandon the warren, but he does not listen. So they take whoever they can, and go.

The 12 rabbits--all bucks--have many adventures on their way to a new place to call their own. They have to ford rivers, escape predators, and they have run-ins with a very strange warren that is hiding a deadly secret.

Eventually they realize that they will need some does, which leads to their dealings with General Woundwort's warren and its militaristic rabbits. The General's warren will be either the salvation or the entire downfall of their new warren on Watership Down.

* * * * * *
If you don't like talking animals, this one is probably not for you. However, they're not wearing clothes or cooking or anything. Think of it as Redwall Lite: while the rabbits think and talk, other than that they act like rabbits. So they forage for food, they live in holes in the ground, they're constantly worried about hiding from predators, etc.

It was exciting! There was always some danger to be faced. They had to learn to use their strengths and work together to get through. Bigwig's physical toughness, Blackberry's intelligence, Fiver's mysticism, and Hazel's quiet leadership came together in wonderful ways as they made their way along.

Every so often there's a digression, as the rabbits tell one of their ancestral stories. Even though these trickster tales took me away from the main plot, they were enjoyable in their own right.

Also, for as many pages as it was, it didn't feel long. In fact, from the final big plot to the end I was racing through. I just had to know what happened!

Some read it as an allegory. I can see that, especially considering the 2 very different warrens they come across--each dysfunctional in its own way. However, I liked it for what it was on the surface--a great story about rabbits!

It may have caught my 8-year-old's interest. As long as he can handle the length, I think he would really like it!

Content: Some of the rabbits are severely injured in various ways and some die.

Have you read this one? What did you think about it?