It seems our only theme for read-alouds this summer is SHORT! Somehow, even with mostly unscheduled days, we have to squeeze in time for reading here and there--between all the playing, you know. Except for The Enchanted Forest Chronicles, which in comparison have seemed to go on and on; we're still plugging away at the last one. 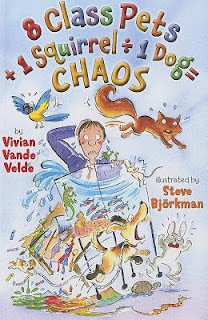 This is the story of Twitch, the school-yard squirrel, who runs into school after hours to escape an owl, and Cuddles, the principal's dog. The owl flies away, but Cuddles follows him through the door. That's when all kinds of crazy starts happening.

Each chapter is told from the point of view of a different animal, most of them classroom pets, from Green Eggs and Hamster, in the first-grade classroom, to the school of neon tetras from third grade. Some of the animals are trying to save Twitch, some just give advice, but all of them are involved in making a gigantic mess.

You could tell from the cover that this one was going to be funny. The chapters were very short, most in the 4-5 page range, and each had 2-3 illustrations as well. This one begged to be done with different voices for each animal, but just a heads-up--there are 11 of them! I tend to top out around 3, but I did my best.

Anyway, the kids enjoyed it. We read it all in one sitting; it took about an hour. 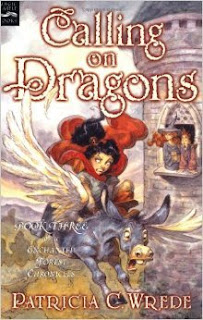 2 stars: A lot of talking, but we finally got into some action towards the end.

Told from Morwen the witch's point of view, with many asides by her cats. Morwen first discovers something a little fishy when her cats discover a 6-foot tall rabbit named Killer in the garden. One thing leads to another, and before long she discovers evidence that wizards have been in the Enchanted Forest again.

When she brings all this to the attention of King Mendanbar and Queen Cimorene, they also discover that Mendanbar's sword is missing. This is the sword that's linked to the magic of the Enchanted Forest, as well as to the spell to keep wizards OUT of the forest. The wizards have somehow managed to steal the sword.

Of course, someone is going to have to go find it. Mendanbar can't go, because he's the other pillar of the spell protecting the Enchanted Forest from wizards. Cimorene has to go--even though she's pregnant--because only someone related to the King can even hold the sword. Morwen, Telemain, and Kazul come along for support and protection. Killer, the ever-hungry bunny turned blue flying donkey, has to come to stay out of trouble until someone has time to fix him. The cats come just because they're cats.

Little do they know there's going to be big trouble at the castle while they're gone.

This has been my least favorite of the series so far. It seemed like most of the book was the characters talking, arguing, or getting lost on the way to get the sword. Killer added quite a bit of comic relief, which was sorely needed. We also liked the story of Rachel's tower. Once they finally found the sword, things picked back up again all the way to the end.

We're going to check out the book on cd--I'm interested to see if listening to someone else read it will be a better experience. 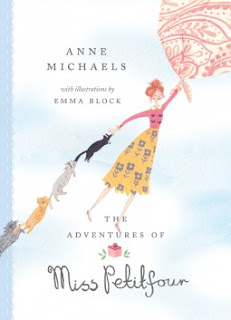 The Adventures of Miss Petitfour, by Anne Michaels, Illustrated by Emma Block

4 stars: Clever, whimsical, and delightful, like Miss Petitfour herself.

Miss Petitfour wears her hair in a messy bun, has 16 cats, and prefers to get around by tablecloth. She gathers up the corners, lets the wind puff it up like a balloon, and the cats all grab on to be the tail. This is a collection of 5 different adventures--all just the right size to fit into one magical day.

* * * * * *
This was such a funny little book. I mean that in both senses of the word. It had amusing things that happened, like a giant ball of hangars wreaking havoc at a Jumble Sale, and it was just a bit odd in a delightful sort of way.

Every character is a little quirky. The bookshop owner, who divides her shop into the "Ho-Hum" (books where nothing ever happens) and the "Hum" (adventure books.) Mr. Coneybeare and his confetti factory, Colonel By and his walloping wife. It's a quaint little village full of eccentric people, where the signs for each store are in the shape of what is sold inside. Miss Petitfour fits right in!

Every so often, the author inserts herself into the story to talk about words and writing. When the author uses a big word that may be unfamiliar, she defines it in a humorous way, then proceeds to use it several more times in the chapter. Each time the new word is highlighted in red. It reminded me a bit of the Lemony Snicket books in that way, but with a much happier outlook!

Then she also talks about words used in writing. For example: "Certain words are like twists of crumpled paper jammed into the hole in the bottom of a leaky pail, to keep the story from spilling out too quickly. Words like meanwhile, by the way, it is interesting to note and that reminds me of. Adults use these words all the time when they are afraid things are getting too exciting."

Nearly every page has a watercolor illustration on it to add to the charm.

If you love words, whimsy, and don't mind repeating the names of all those cats at least once a chapter, this is the book for you. [Okay, I will admit, sometimes I just shortened the cat-name recitation to "all the cats!"] 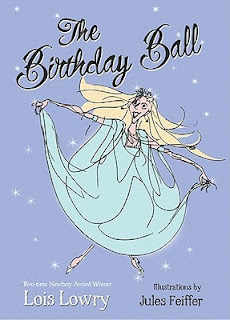 The Birthday Ball, by Lois Lowry

2.5 stars: Mostly fun, but crude in a few places. I wish I had been the one reading it, instead of listening to it!

I read this one on my own back in May and tucked it away in my mind as one to read to my kids at some point. Here's my review from Goodreads:

Princess Patricia Priscilla is turning 16 soon and is completely, utterly bored with her life. So she switches clothes with her maid and attends the village school for a few days, as "Pat." Delicious, her cat, comes along. Meanwhile, her 3 awful suitors (from whom she is supposed to choose a husband at her Birthday Ball) also prepare to win her. The schoolmaster happens to be quite handsome, despite his attempts to be stern. Something must be done, but Princess Patricia doesn't really see a way out of her predicament.


This had the feel of a Roald Dahl book. The characters are all wacky--from the hard-of-hearing Queen, to the butterfly-obsessed king, even down to the kitchen help (triplets who sing)-- they are all drawn large and slightly ridiculous. I got the impression that Lowry relished making the suitors as terrible as possible--all of them with personal hygiene problems and personalities that would make any normal person run away in fright.

I want to read it out loud to my kids--I think the humor, the word play (for instance, everything the Princess says to her cat rhymes with its name), and the over-the-top antics would really appeal to them.

So when we were packing for our trip last week, I saw the audiobook at the library and snatched it up. Perfect! Except... I had forgotten how crude the Conjoined Counts were--mostly bathroom words, and "butt" etc.--though they do have a laugh over "balls" at one point. Yeah. Thankfully that one went over my kids' heads, but I was embarrassed, and my husband gave me a hard time about it later.

You know how when you listen to something, any questionable parts sort of hit you in the face? After that, we skipped over the parts that talked about the Conjoined Counts. Had I been reading it, I would have edited as I went along and all would have been fine. Oh well. Live and learn, I guess.
Just--word to the wise. 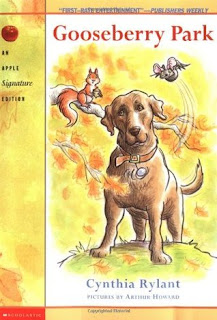 Kona is a chocolate Labrador who belongs to Professor Albert, along with a wise hermit crab named Gwendolyn. One day, on a walk in Gooseberry Park with the professor, Kona meets a young squirrel named Stumpy. Rather than chase her or bark at her, something strange happens--the two become friends. By extension, Gwendolyn becomes friends with Stumpy too, because Kona tells them about each other.

When Stumpy is ready to have babies, Kona is super excited (Gwendolyn is too.) Stumpy decides her old nest, completely full of her collection, will never do, so she sets off across the park and makes a new nest. Clean and new, just right for babies. A bat named Murray lives just above her new home, and the two of them become friends as well.

Then one night a terrible ice storm ravages the town. Kona, listening to the tree branches crashing down is terribly worried about Stumpy and the babies. He just has to make sure they're all right. Thus begins his heroic journey to the park to check on the little family, and the beginnings of a group rescue effort.

This one was great! If I needed one to redeem myself after The Birthday Ball, this one fit the bill. :) Short chapters, with a small illustration every 1-2 pages helped keep even my 4-year-old interested. The animal characters each had a distinct personality: Kona was courageous and loyal, Murray kept us laughing, and Gwendolyn was the wise older soul with good advice. The plot was straightforward, but came together nicely.

My 8-year-old pretended to not be listening after the first half (nice try!), but the younger two admitted to really liking it.

I was happy to see there's a sequel out as well: Gooseberry Park and the Master Plan. I plan to get to that one soon!