Flowerpots: Saved by the Autumn Rain!

This was going to be a post about how the flowerpots are done for the year.

The 3 in front were moved to the back deck to accommodate the house getting painted, and admittedly, I have only watered them once or twice since then.
They were looking pretty sad.
As I was trying to remove some of the dead leaves and such, a couple of entire branches broke off at the base. Yep, it was time for the Great Yanking.
Then it started raining.
Saved at the last minute by the autumn rains! 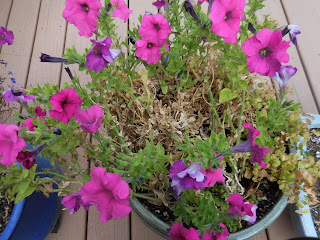 They've perked up a little--enough to grant them a few more weeks, anyway. 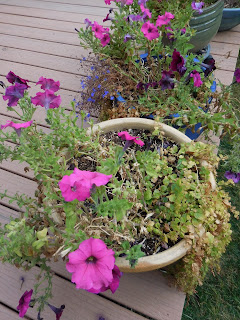 The 2 that were already on the back deck, though, may be beyond saving: 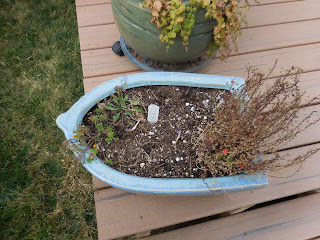 This blue boat already looks like the flowerpot that time Mom forgot. 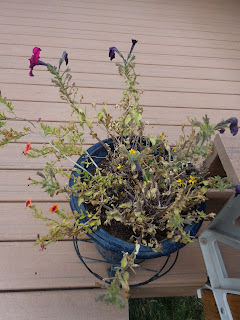 And...I don't know that rain is going to be able to do much for this poor thing, either.
At the next break in the clouds I will probably empty these 2 pots into the garden & compost bin, and get them into the shed for the winter.

Meanwhile, the asparagus fern over on the shed porch is looking as vibrant as ever. 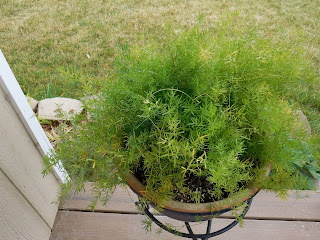 These lovely plants store water in their roots and can take more drought than most--which I can attest to, since it hasn't been watered since sometime in August.
They do well as house plants, too.
In fact, this is one I had in a pot last summer, then overwintered in the house.
(If and when the individual fronds die off, they do leave those tiny leaves all over whatever furniture you've got them on--just FYI.)
I need to decide if this one's coming in for a second year or not.
If not, I may give it away, so it at least has a chance of living on. 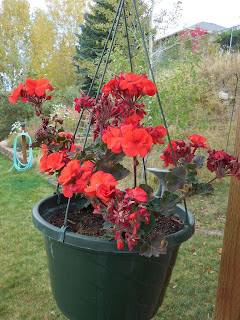 This geranium just keeps plugging away.
As you can see, the petunias and other filler flowers that were in this pot with it are long gone--they didn't make past July. Somehow, though, this keep on surviving.
Now that's my kind of plant!
It adds a cheery spot of color over here by there shed.
Hey, 5 out of 7 isn't too bad, right?

Frost will come in the next couple of weeks, I'm sure.
Just knowing that they've only got a few weeks left makes it seems pointless to spend too much time and effort keeping them alive right now. Sad but true.

Our neighbors have pots that still look full and gorgeous right now.
(Apparently, they don't have the same aversion to watering in September that I do.)

Are you one of those amazing and consistent waterers that can keep a pot thriving all the way until frost?
Or are you like me and at some point just let them peter out?

Email ThisBlogThis!Share to TwitterShare to FacebookShare to Pinterest
Labels: containers