How to Plant Irises

We finally had a break in the weather on Saturday, and I was able to get out and get some irises divided and transplanted.

If you need help dividing irises, check out this post.
Once you've got them divided out, it's time to find a new home for them!

Just when I thought I couldn't possibly fit any more irises anywhere, I had a bright idea.
What about the corners of my vegetable garden beds?
The far corners, especially, are not great for planting vegetables. 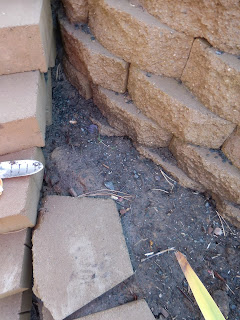 Exhibit A: Too narrow for the tiller, not enough root space for most veggies.

So, what you want to keep in mind is that irises are quite shallow-rooted, because the fleshy part has to stay above ground. That's right. You're not burying this thing!

If they've been in one place for a couple of years, their roots will go down maybe 4-6 inches, but as you're transplanting them, those roots are going to be just under the surface. 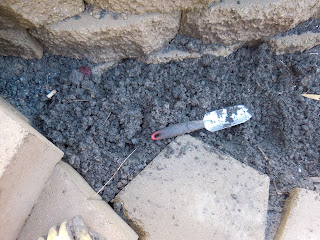 First, dig up the area you're going to plant to loosen the dirt.
Then spread it back out evenly.
Again, you're not making a hole.
In fact, it's probably better to keep the soil even with hard surface at this stage.
You'll add more dirt in a bit. 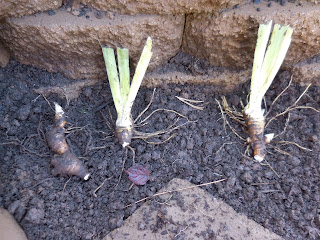 Lay your iris rhizomes onto the surface where you want to plant them.
Spread the roots out.
You can snap or cut any roots that are way too long for your space.
If the roots are growing straight down from the bottom, you may need to dig a little bit on the sides to accommodate them--just make sure your rhizome is still resting at ground level.

Once I've got them laid out, I usually grab each one and push it down into the soil with a little jiggle, just to get it set in there better.

By the way, you can put them so the leaves are going different directions.
Sometimes I make a little 3-pointed star, with the leaves around the outside.
This time though, I want them all going up the wall at the back, and not flopping onto the walkway in front as much--hence all in a line. 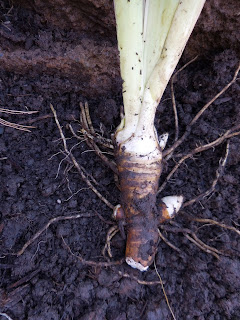 Notice the baby rhizome beginning to grow on the right side of this one.
It didn't have its own root system yet, so I just let it stay where it was for now.
If it had been bigger, with its own leaves and roots, I would have broken it off and planted it separately.

By the way, the leaves were all at least 3 feet long when I divided them.
I tore them off to make the irises easier to work with. 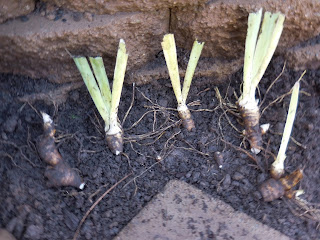 Okay, here they all are.
Once you've got them where you want them, cover up those roots! 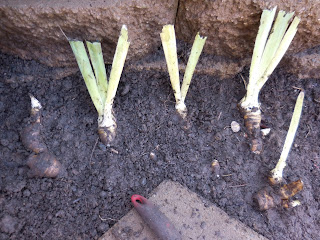 I took soil from the garden nearby to cover them up.
Pack the dirt down firmly.
Don't forget to add extra soil behind the "head" where the leaves come from--that end is usually a little higher off the ground than the other.
Try to jiggle them again.
If they move very easily, you need to pack more dirt around them.

See how the rhizomes themselves are still above ground?
That fleshy part needs sunlight and air to keep it from rotting! 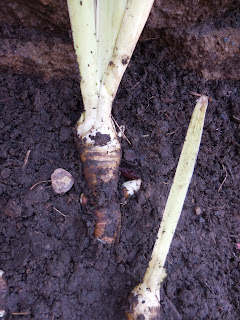 All the roots buried!
By spring, they should be firmly anchored in the dirt, with at least a few new roots growing into the new soil to hold on! 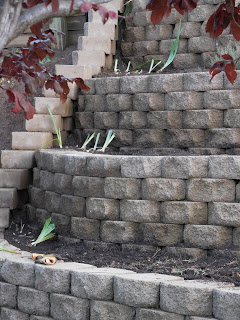 My 3 new iris patches.
Do you like how I keep adding flowers to my vegetable garden? Ha!
They look like the come out pretty far from this angle, but really they're not taking up very much space.
(That's my story and I'm sticking to it!)
Posted by Linnae at 8:00 AM