Our read-aloud time has taken a serious dive since school started, partly because we don't have a set school-year routine for it. (Any tips?)  However, we have managed to read a couple, one on our recent trip. We've got another trip coming up this month, so I've got a few more lined up for that. Captive audiences and all that! 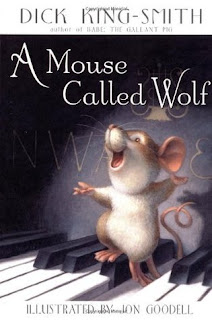 Wolfgang Amadeus Mouse has always had a musical bent. His family lives in the walls at Mrs. Honeybee's house, and one of their mouse-holes is perfectly positioned for him to hear her playing the piano. Eventually, the lonely elderly woman and the little mouse become friends. Then one day, something magical happens: little Wolf opens his mouth and sings! Beautifully, too. Their friendship is cemented.  Later, when Mrs. Honeybee needs help, it will be up to Wolf to save her.

* * * * *
I read this to my two youngest (ages 6 and 4.) We all enjoyed it. It wasn't a spectacular hit, but it was warm, cozy, solid storytelling. So far I have liked everything of Dick King-Smith's that we've read. I'm beginning to think he can't go wrong! 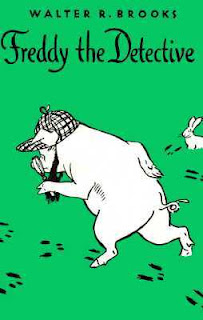 Freddy the Detective (Freddy the Pig #3), by Walter R. Brooks

4 stars: Barnyard mysteries solved, plus one for the humans for good measure.

Freddy is quite the pig. (The other animals on Mr. Bean's farm are no slouches, either.) Now that they're back from their vacation to Florida, Freddy has been reading a lot of mysteries, specifically Sherlock Holmes. He decides to take up detective work amongst the animals.

His first case isn't long in coming. The Beans' little boy is missing a toy train, which apparently vanished without a trace. Detective Freddy knows better and sets out to investigate. When he finds out it was the rats, he is not at all surprised. Unfortunately, getting the train back to its owner is going to be a lot harder than he had anticipated, even with Jinx the Cat's help.

Before long, his caseload is very busy. The animals decide to elect a judge, and even make a jail in the barn for those who need it. Even the humans come to him for help at one point, which Freddy is happy to give--as long as he gets the credit. The rats and the train remain an enduring problem, which one day comes to a head as his friend Jinx is accused of murdering a crow!

* * * * *
First of all--I picked this one up not knowing it was 3rd in the series. It was fine on its own, for the most part, though there were numerous references to a trip to Florida and its aftermath for the animals and Mr. Bean.

I thought the way Freddy interacted with humans was well-done. Though the farm animals talked amongst themselves, Freddy didn't speak English, or anything. Still, he managed to get his point across well enough.

Several of the animals had entertaining personalities. Charles the henpecked Rooster was pretty funny, and the rats were suitably insulting and outrageous. The friendship between Freddy and Jinx the Cat was not as well defined--they had a falling-out a few times. Maybe having read the earlier books would help that come into focus a little more.

We read this one in the car and it was great for that. The plot kept us interested, and was straightforward enough that we could still follow what was going on even with lots of interruptions. The kids put some of the mysteries together before Freddy did and it was fun to hear them talking about it.

Little did I know this is a series of 27! They were originally published starting in 1927. I had never heard of them before I found this one. Our library has a rather random assortment of them, but I did manage to find #1, Freddy Goes to Florida, for us to read next.

Have you read any of the Freddy series? Do you have a favorite to recommend?
Posted by Linnae at 8:00 AM