Crossing to Safety, The World According To Us, & The Miniaturist

I'm trying to get caught up on my reviews before the end of the year! These are 3 adult fiction novels that I read all on my own. I mean, not even for book club or anything. Whoa, weird!
Let's go from what I liked most to what I liked least, shall we? 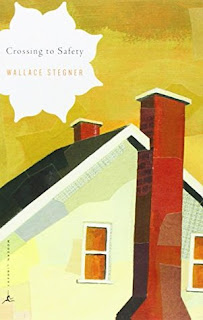 Crossing to Safety, by Wallace Stegner

4 stars: Generous and insightful profile of enduring marriage and friendship.

Larry and Sally are young, poor, and in love. He's starting his first "real job" as a creative writing professor. It's a temporary position with the possibility of becoming more permanent. He's also writing a book on the side. Sid and Charity have 2 children, and Sid is also in the English department--not tenured yet, but hoping to be soon. The two couples immediately hit it off and become best of friends. Charity and Sally both become pregnant, so they have that to bond over, as well. While Sid and Charity have quite a bit of money and influential family connections, the disparity in their circumstances doesn't ever make them shy away from Larry and Sally. Their friendship spans more than 50 years.

They spend many happy summers at Charity's family's lake house together, doing projects, going on hikes, swimming (and night swimming), and writing. The book begins and end at the lake house, as Sally and Larry have come back one last time to be with Sid and Charity, while her battle with cancer comes to a close.

* * * * *
This is not a flashy story. There's a fair amount of trouble and angst, though not over the types of things you tend to find in other such stories: affairs, betrayal, big secrets that come to light, etc. It's just two couples muddling through the best that they can. None of the four are perfect, though Charity's flaws probably have the brightest light shined on them, but still their marriages and their friendships endure.

One part of the book I still think about actually didn't have to do with either couple. It's the way Charity's mother ran summers at the lake house in Charity's youth. I loved how she didn't care what the children were doing, as long as they were doing something purposeful. If they wanted to swim all day, that was great! Same for coming up with projects to do, or hikes, or reading, or playing games.

She just couldn't stand them hanging about, or wandering aimlessly, or worst of all, complaining of boredom. Then, when they had come to a stopping point, or needed a little extra guidance, she would gather up whoever was around to the front porch and teach them French or discuss literature with them.  Maybe I could take some hints for patterning our summer after that! Have some learning opportunities or outings in reserve, but as long as the kids are purposefully doing their own things, let them go at it!

My rating of this one has grown in hindsight. When I first read it, I was probably at a 3: I enjoyed it, but I didn't love it. As I'm thinking back on it, though, I'm remembering more and more scenes from it that impacted me--big and small--and it makes me want to sit down and discuss it with someone. (Maybe I can get my book club to read this one!)

Perhaps it could be written about any 2 couples. We all have personality conflicts in marriage that we have to work through or work around if the marriage is going to endure. My husband and I also have a few really close friends that I expect (hope) will still be our friends when we're old and gray. I am sure they have seen our flaws up close more than once, but it hasn't changed their regard--at least, not that we can tell. Ha!

Maybe that's the genius of this book. It's hard to believe it's fiction, because it feels like these people are all real. Almost like you might know them if you passed by them on the street.

Content: There are mentions of marital sex, and a few other intimate moments, but it's not the focus or graphically described in any way.

Recommended for adults. I don't know that most teens would be interested, anyway!
(I think I would have been bored stiff reading this as a teenager! Now that I've been married for awhile, though, I appreciate new perspectives on how other couples have made it work over a long period of time.) 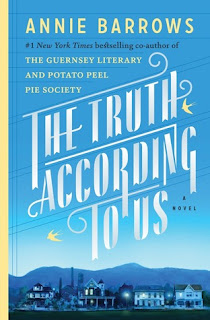 The Truth According to Us, by Annie Barrows

3 stars: A slow-paced, character-driven exploration of a southern town and its secrets.

Layla Beck is a spoiled rich girl, the daughter of a Senator. When she refuses to marry Daddy's choice, a rather dramatic spat ensues. The upshot is that she has been cut off from his money and must work for a living. Specifically, the Senator manages to get her a job on the Federal Writer's Project, writing the history of a small town in West Virginia. Layla has inherited her father's stubborn streak and will not back down, so off she goes to a humble boarding-house in Macedonia to begin interviewing townsfolk.

Meanwhile, the permanent residents of the boarding-house have their own troubles to deal with. Twelve-year-old Willa has recently discovered that the grownups around her don't always tell the truth--she suspected it of her fly-by-night Daddy, but even her Aunt Jottie has shown some signs of it. Willa is determined to get to the bottom of the mysteries in her life (why isn't Aunt Jottie married? for one) and develop her 2 favorite virtues: ferocity and devotion. She would looking after her younger sister Bird to that list, but Bird doesn't tend to need much looking after.

Most of the family mysteries revolve around a fire several years before, at the American Mill sock factory that Jottie's father managed, and which killed the man Jottie loved--who was also Felix's best friend. Felix has a host of secrets of his own. When Miss Beck starts in on her history, all the secrets are going to come out, for better or worse.

* * * * *
Written in alternating viewpoints, mostly between Jottie, Willa, and Layla. There are some letters to and from Layla interspersed as well, which add some humor and a different perspective to all that's happening.

Overall, I liked it, though not as much as The Guernsey Literary and Potato Peel Pie Society. I enjoyed the writing, the characters with all their peculiarities, and the various townspeople all vying to get their version of history written. Willa was my favorite character, Felix my least favorite. It really bothered me that because of his charm and good looks, Felix never really had to face consequences for any of his bad choices (which were consistently the type he made.) Even Jottie, who knew him best of all, constantly made allowances for him in a way that was aggravating!  I thought the ending was fitting. 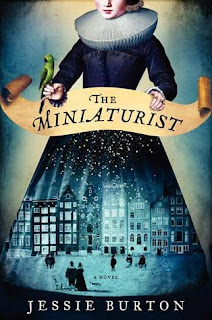 The Miniaturist, by Jessie Burton

It is 1686, and 18-year-old country girl Petronella has somehow managed to secure a marriage with Johannes Brandt, one of Amsterdam's prominent businessmen. Soon after her marriage, she discovers all is not what it appears to be in the Brandt household. She encounters coldness and hostility right from the beginning, particularly from Johannes' sister Marin.

Not only that, much to Petronella's embarrassment and distress, Johannes has no interest in consummating their marriage. He treats her somewhat kindly, but holds her at a distance, too. When she walks in on him with another man, Petronella's ideas of the world take a sudden and dramatic shift. Little by little she gets to the bottom of all the secrets in this strange house and must figure out her role in it all.

* * * * *
I probably should have read a few more reviews before going into this one. Everything I read focused on the cabinet of miniatures and how that played in to the secrets being kept in the house. The cabinet was interesting, I suppose, but it was really more of a sidenote in the whole thing. I could see why the characters would find it a bit unsettling, but it certainly didn't predict anything that was going to happen, the way some of the reviews I read alluded to.

Instead, something traumatic would happen, or a secret would be revealed, and Petronella would later on discover that the evidence of those things was already part of the miniature people or furnishings of the cabinet. Okay. Weird, yes, but not like a horror movie sort of weird. Just strange, with an undercurrent of "Is someone stalking us or what?" Plus, there's never really a resolution for that part of the story, so what was the point of including it? Using the miniaturist in the title seems almost misleading after reading the book. I mean, the woman never even makes a physical appearance in the story!

I was really taken off-guard by the focus on gay issues. It was just not what I was expecting to encounter in this book. Once Petronella understood her husband better, she was able to make peace with who he was and what that meant for their relationship. Incidentally, I'm not sure that would have really happened in that time period, with her upbringing and inexperience, but okay I guess. There was one tender scene between them when he was in jail, where she just held his hand for a long time; to give him what comfort she could, and to show her support in all he was going through. That was probably the best scene of the whole book.

I can't say that I really liked any of the characters all that much. Petronella grew up pretty fast (she had to), and came into her own, but I never really related to her. Johannes was a weak man who let his big sister basically run his life and couldn't seem to control his sex life or even be careful about it. He had to know what was at stake, but that apparently didn't factor into his decisions at all. Also, for supposedly being this great businessman, he didn't seem to care that he had a warehouse full of sugar rotting out from under him. Why he couldn't just sell it was beyond me. Marin was a piece of work--completely hypocritical and mean for no reason. Since she orchestrated it, you'd think she would actually try to make Petronella's marriage work, but no, instead she consistently treated Petronella like trash, while acting self-righteous at the same time.

Sad ending. Pretty much a downer of a book all around. I did finish it, but I won't be recommending it to anyone, nor will I ever re-read it.