Just like every year, my vegetable garden is as much "learning experience" as it is bountiful harvest.
A few notes on what I did and what I want to do differently next time:

This year I got my spring vegetables in nice and early (3/26!) which was a big improvement from 2015. The kiddos planted their patches at the same time.
We put in lettuce, peas, spinach, beets, carrots, onions, and pototaes. 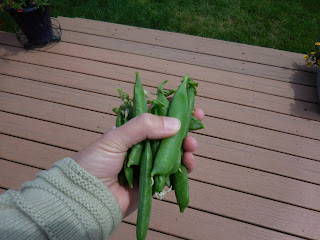 The peas were delicious!
We ate them by the handfuls in June.
The pruned plum tree branches as "pea sticks" (pea vine supports) were perfect.
(Pea sticks for ever and ever!)
Of the 3 varieties I put in, I couldn't tell you which was the best.
We gobbled them all up.
Every year I decide I should plant more peas and every year it is true.

We did plant copious amounts of butter lettuce (the seed package spilled...more than once).
So, as it turns out, I don't really like butter lettuce.
The kids would nibble at it from time to time, but mostly it just grew and grew until it bolted. 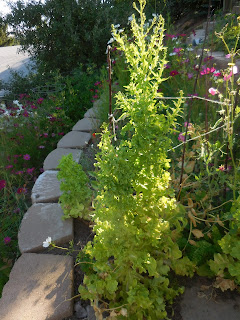 Exhibit A: I don't think lettuce is supposed to be this tall!
If we are going to grow lettuce again, I need to find a different kind that has more crunch.

Spinach and beets were a disappointment this year.
Something got to the leaves making the spinach virtually inedible.
I harvested some beets at the end of the summer, but have yet to use them.
I threw away one bag the other day and the second may be on its heels soon.
Better luck next time! 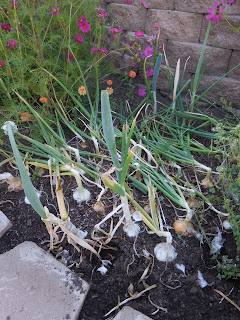 Onions weren't terrible, but didn't get nearly as big as last year's.
[Small onions make me grumpy.]
I picked more as I went along this summer and liked using them fresh. 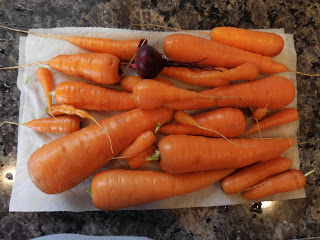 Carrots were slow to germinate, as always, but I had enough patches scattered around that I ended up with a decent harvest when all was said and done.
As with the onions, I harvested these more as I went along this year, instead of all at once to preserve.
The flavor was fantastic, even eliciting a comment from my oldest about how vegetables you grow yourself always taste better than store-bought.
YES! Another gardener in the making! 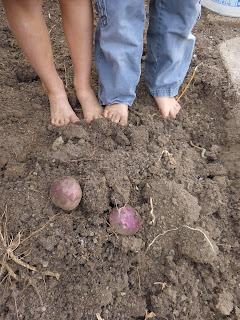 Last but not least, let's talk about potatoes.
I put in 'Yukon Gold,' which are my favorite, along with 'Viking Purple.'
I planted them later in the spring this year--more towards the end of May--and didn't find any rotten hills at harvest. I'm counting that a minor success.
However, the harvest was small--really just a few potatoes per hill.
After a few years of trying the method of just planting the whole seed potato--1 per hill--I'm going back to what I used to do, which was to cut up the seed potatoes and put 4-5 pieces with growing eyes in each spot.
Part of the smaller harvest could have been due to the soil up on the top terrace, since it hasn't been amended as much, so next year I will be rotating those to a different spot, as well.

We had eaten up the garden potatoes by late October, probably.

With a very mild winter and spring this year, my tomatoes were planted extra early (5/14) and no, we were not surprised by a late frost. I could have put them in at the beginning of May, which is unheard of around here! 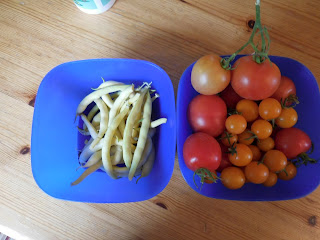 I did just 2 varieties this year: 'Cougar Red,' and 'Sun Sugar."
Not as prolific as some years--the summer was cool through July--but enough to make a few quarts of Roasted Garden Tomato Sauce to freeze, and some to eat fresh, too.
If I want to do salsa again, I'll probably need to plant twice as many.

Since the yellow beans are also pictured there above, I'll take a moment to talk about them.
I had grand plans to put them in anywhere I took out spring veggies, like I did last year.
Well, I got one patch planted and that was about it.
So our bean harvest was pretty minimal this year.
We enjoyed eating them fresh--I planted some each of 'Royal Burgundy,' 'Blue Lake Bush' (I think), and the Yellow Wax. We all liked the variety in colors, though I couldn't tell any difference in the flavor. 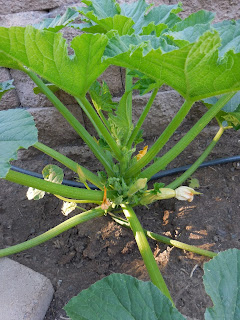 One hill of squash was actually about right for how much we eat it--or don't, I suppose.
This little plant was prolific and didn't succumb to the powdery mildew problem of years past.
No real problems to speak of. 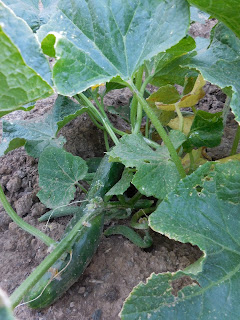 The 'Diva' cucumbers were great this year!
The kids and I couldn't get enough!
We ate them fresh nearly every day once they started coming on, sprinkled with salt and pepper.
Yum!
It's the simple things.

Bell peppers were a disappointment. Again.
[Why do I keep letting my kids talk me into planting them? I know better!]
If we get a greenhouse someday, then I will attempt bell peppers.
Out in the garden, they didn't grow much at all and the 2 or 3 tiny peppers that did grow didn't ripen.
Just need to be done with those in this climate. 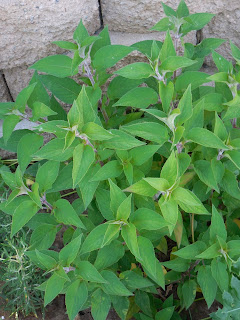 Pineapple sage grew like crazy!
I did not come close to using it up, though I did make some experimental Pineapple Sage Jelly.
As this one doesn't keep its flavor when dried or frozen, it will be an optional choice next year.
Fun for a child's garden, though, since the leaves really do smell and taste like pineapples. 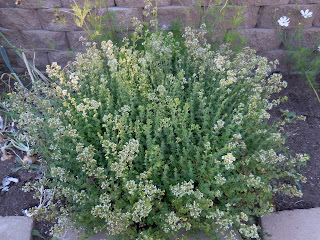 This little oregano bush is the gift that keeps on giving.
I harvested it and dried it, but I still had so much from last year that I gave almost all of it away to friends. This picture shows it at the end of summer, fully recovered from harvesting and covered in blooms. Lately I've noticed that it looks pretty sticking up out of the snow, too. 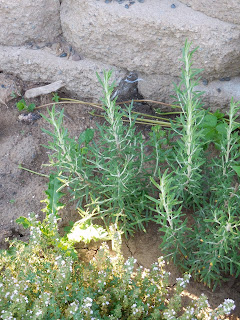 Rosemary grew very well this year.
This picture shows it early on in the summer.
I did not get it harvested or dried like I had planned, but I did manage to use it fresh a few times.

The thyme at the bottom of the picture was from last year.
I did not get any of it dried, either.
Hmm...I'm noticing a theme here, sadly.
It flowered late spring, before I expected it to, and I did not get it harvested.
I supposed you could still dry it after it blooms, but I don't know.
I'll have to look that one up.
Particularly if it survives this cold, snowy winter this year.

* * * * * *
Overall, I was happy with the vegetable garden this year.
I didn't get an abundance of anything, really, but what we did get was eaten gladly.

Next year I may go crazy and devote an entire terrace to corn, or something.
My neighbor always planted corn and shared it with us, so I never saw a need to put in my own.
They moved this fall, though, (across town) so maybe 2017 will be the year of corn!

I'm thinking fewer varieties of spring veggies but greater quantities, as well.
For instance, garden onions are fine, but I don't love them.
That space could be used for peas!

The top terrace is wild and woolly, with strawberry runners going every which way, amongst herbs and even a volunteer tomato plant this year!
I will probably take the lazy way out and just let it do its thing again next summer, though I may pull out some of the parent strawberry plants if they're not producing much.

Even in a less stellar year, I still find the rewards of putting in a vegetable garden outweigh the effort and time it takes. As my son said, nothing beats homegrown for flavor!
Posted by Linnae at 8:00 AM