Back Flowerbed & Deck: Then & Now

Reclaiming half of the slope as a vegetable garden wasn't the only change we made to the backyard.
(Ha! Are you kidding me?)

There was a flowerbed, of sorts, next to the house, along with a deck. 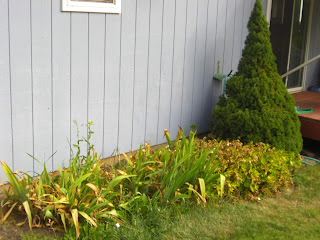 In need of some serious TLC.
That tree was one of the first things to come out.
It was wasp central, it was way too close to the house, it blocked the water spigot and hose reel, and I just didn't like how it looked. 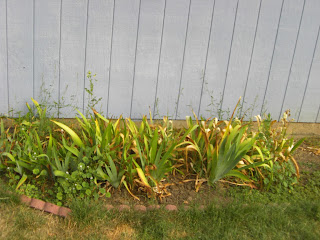 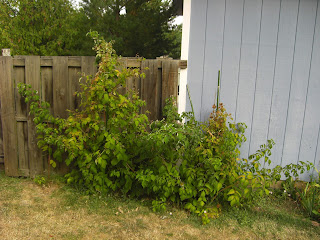 Hey! A raspberry patch!
Growing out of control, blocking the fence, and producing tiny seedy berries due to lack of water, but it was something, anyway. Another project, among other things.

Other than general cleanup of this flowerbed, I knew I wanted to add some height and variety to it.
I love irises, but by mid-June they're pretty much done blooming. Then all you have are a bunch of green leaves all the same height.
This bed was definitely a progression over several years.
There's not anything left in it from the original. Everything has been pulled out completely or moved elsewhere. The irises live on out front and in the East-side terrace, and the raspberries have a dedicated patch of their own these days. 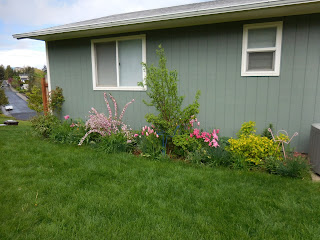 Perhaps it's not fair to compare the lushness of spring with August, so here's a couple of pictures from last fall, for a little perspective: 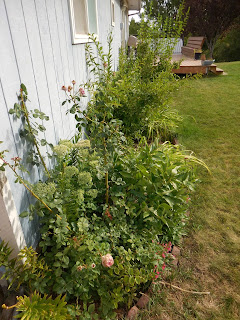 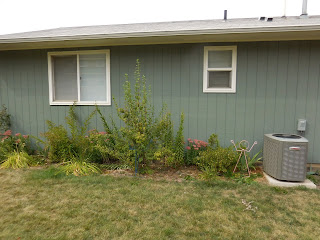 I think there's still more to do with this bed, but that's Not My Problem anymore, is it?
Also, please note the air conditioning unit in the NOW pictures.
We installed that after the first year, because we are wimps.
No regrets.

The back deck was another project on the list. 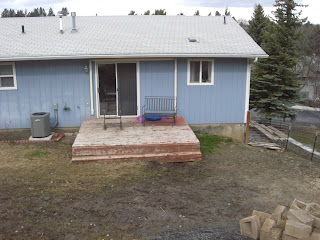 This was from March 2013.
I didn't get a picture of the deck when we first moved in, but this was the original.
There used to be a maple tree on the right-hand side, which came down fairly early on, as it was literally 2 feet from house, taking off shingles.
It's funny how I can date this picture mentally based on what has been done and what hasn't.
Post-lawn grading, pre-grass/sprinklers, with more wall to build (blocks in front).

Anyway, this deck was just too small to really be used.
With the big sliding glass doors there, it was all walkway.
Once we fixed the steep side slope problem, it just made sense to extend it all the way to the corner of the house. Also, my husband wasn't about to stain those boards every year either, and you can see how badly they needed it. 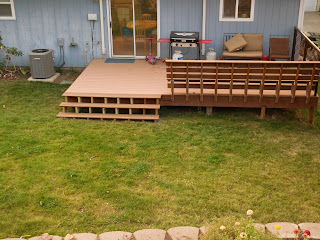 Just because I'm really proud of it, one more picture: 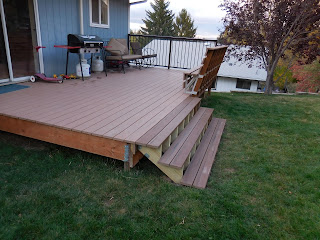 Yes, my husband built that!

There's space to sit, space for a grill, and even a railing so the wind didn't blow things off the far side.
We used this deck just about every day in the warmer months.
For awhile, the kids really got into riding their scooters on it.
The best part? It was all Trex decking, so no maintenance required!

Are you having as much fun with this as I am?
Here are the earlier posts in the series, in case you missed them: