These 2 beds existed when we bought the home.
They are cut out of the 2 front corners of the lawn.
As such, they each now share a border with the flowerbeds in front of the fence.
While I wanted them to go with the color scheme in the front beds, I didn't want them to be exactly the same. So the color scheme for them includes darker versions of the pastels up front. 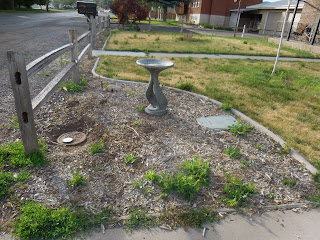 For instance, in the bed closest to the driveway, I planted a 'Coral Sunset' peony.
Then I put in some tulips--Jaap Groot (Giant Darwin hybrid; mid-April; melon yellow with ivory edges) and Merlot (lily-flowering; May; merlot red).
Instead of the daffodil mix, I did a patch of Narcissus 'Hawera.'
I also planted one of the roses I removed from the Oval Garden.
Oh yes, and I put in a patch Allium Sphaerocephalon (drumstick alliums), which will bloom in July.
I really hope this giant rock (below) is not covering the alliums, since I can't exactly remember where I put them! 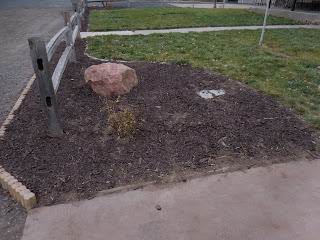 Before I could do any of that, though, I had a lot of prep work to do.
I moved the birdbath to the back corner flowerbed.
Weeded, raked back old mulch, picked out rocks.
My oldest son helped me haul compost up and spread it out.
Then, since the water line ran through there, I dug it over by hand.
There were so many roots and rocks in there! I got out as many as I could.
Raked it smooth, breaking up clumps, picking out more rocks.
Phew! THEN I planted all the stuff.
Then my husband and kids spread mulch on it.
Done until spring!

There's actually still quite a bit of room in there for summer bloomers. 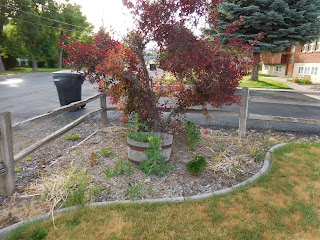 In the corner bed with the purple tree/bush in it, we had a different challenge.
I wanted the barrel out of there.
As we tried to tip it over to empty the dirt out, it fell apart completely.
So then we had to dig up and pull out all the metal bands and wooden slats.
There were also some bulbs already planted in this bed, including Asiatic daylilies and tulips.
So after weeding and spreading compost, I dug this one out by hand as well.
There will probably be a few I missed, but I dug out as many bulbs as I could find.
If I remember right, they were all red, orange, and yellow--so I'm going to put them in the back corner bed, where those colors will be more welcome.

Meanwhile, underneath where the barrel sat, there was a very large piece of buried concrete that had a pipe sticking out of it. There was also a hose running through the bottom of it. We cut the hose on both sides. Yes, it was probably sprinkler hose, but we left the ends sticking out of the ground so we'll remember to fix them before we turn the sprinklers back on next year!
Then with pick-axe, shovel, and a lot of muscles, my husband and son dug that concrete out of there. It went down about 3 feet deep, with about 18" diameter.
So finally after all that was taken care of, I could start planting! 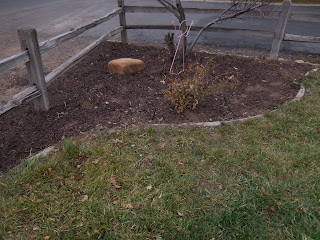 On this side, I put the last rose from the Oval Garden into that nice big hole left by the concrete.
Then I planted a peony 'Bowl of Beauty' in the far corner.
One patch each of tulips, daffodils, and allium--same as the other side.
There is a bit more room here, as well, but I need to see how much shade there will be with the bush there before I add anything else.

It feels good to get these beds prepared and some planting done.
By next spring they will be all ready for putting in summer blooming perennials!