Series Spotlight: As the Ward Turns, by Joni Hilton

Today's series is a throwback to the early 90's. In other words, I have had these books for a long time! I don't remember when I bought them, but I'm pretty sure it was pre-marriage. I have re-read them many times. This last time around, though, it had probably been years since I last cracked them open.
Even though I knew what was going to happen, the turns of phrase, and the zany situations had me laughing all over again!

If you can't tell from the titles, this whole series is very Mormon-centric. A "ward" is the Mormon word for a congregation. Those unfamiliar with Latter-day Saint terms and culture may not think it's funny at all. Some of it is a little bit dated--for instance, "Homemaking night" is now just called a Relief Society Activity. ("Relief Society" is the women's organization within the church.) If you have never heard of either of those terms, you may need to find a Mormon friend to interpret for you as you read these!

Last thing you should know before diving in--there's some straight-up preaching in all of these books. Spoken through the mouths of the main characters, but really, spelling it out as though you are sitting in a Sunday School lesson. That's not my favorite style of delivery for such things--I much prefer a more subtle approach--but it was fine. For me, the humor more than made up for "hammer the point home" sections. 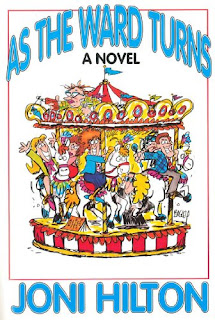 Andy Taylor has an unfortunate new perm and also a new calling: Ward Relief Society President. A busy mother of 3, she feels a bit overwhelmed, but determined to do a good job. She needs someone to be her Homemaking night coordinator, and she's heard there's a sister (not currently active in the church) who has built her entire house using only particle board and a hot glue gun. Perfect!

When she meets Edith Horvitz in person, however, she realizes she may have just made a huge mistake. Edith is very enthusiastic about her new calling, and in fact, has invited a local reality show to film Andy's visit to explain her new responsibilities. Edith, if not certifiably crazy, is pretty doggone close. Perhaps the glued house should have been the first clue? In any case, Homemaking night will probably never be the same again!

And that's just the beginning...

* * * * *
Good thing Andy has a sense of humor--she's really going to need it! A few blue-ribbon apologies wouldn't hurt either, as she always seems to be sticking her foot in her mouth. At least her heart is in the right place.

Even having read these many times before, I found myself chuckling once again at Andy's embarrassing predicaments and Edith's antics. Perhaps being easily embarrassed myself, and prone to get into such situations, made it all the more funny.

As an extremely generous thank-you gift for putting up with him all these years, Andy's brother Nick is taking her and her entire family to England on vacation. She is thrilled! A little less thrilling is the reality of her offer to hold onto Nick and Zan's wedding gifts while they're on their honeymoon. Particularly the macaw (from Edith--who else?) that cusses a blue streak and imitates household noises.

Then Andy is hit by a sudden attack of stomach flu in the airport, and misses the flight (everyone else has already boarded.) If that weren't bad enough, upon returning home, she finds a couple of burglars--or something--in her house. Before long, she is on her own [almost] private flight to England, along with her kidnappers and Edith--who was just stopping by and insists on coming along. She is supposed to lead them to her brother (his shadowy past catching up with him), but there are plenty of things that could go wrong in the meantime. She hopes.

* * * * *
I like the beginning and the ending of this one the best. The middle is good for a smile here and there, but yeah. Get your laughs in at the beginning, then stick it out to the surprise ending. 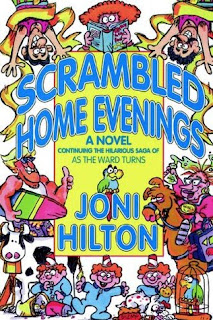 Scrambled Home Evenings (As the Ward Turns #3), by Joni Hilton

4 stars: I laughed until I cried!

Andy manages to deliver 3 healthy little boys, but apparently some of her brain cells have been shed in the process. At least, her unfortunate habit of saying the wrong thing to the wrong person seems to go into warp drive. Is it possible for one person to actually die of embarrassment? If so, Andy is a definite contender, followed by her young teenage daughter Erica--who suffers from second-hand embarrassment due to all of her mother's embarrassing episodes. [How many times can I use the word "embarrass" in one review? Let's count.]

Andy knows her life has turned completely upside down, though, when Brian loses his job and receives an offer from Edith--crazy glue lady. Yep, she is as eccentric as ever, but now somehow she's famous for it. Also rich (from the glue.) Sometimes it seems to Andy that Edith may even be the saner of the two of them. Probably not the best sign. If her husband accepts the job offer, their lives will no doubt jump a few levels from normal, but hey--at least they'll have a roof over their heads. A Day-Glo mansion roof, to be precise.

* * * * *
I thought the second book wasn't as funny as the first, but this one was right back up there. I don't even remember now which part it was that set me off, but I have not laughed that hard in a long time.

Her portrayal of the kids was spot-on, and it was fun to see Edith's transformation from neighborhood curiosity (remember the particle board/glue gun house?) to wealthy tycoon. Andy, I was laughing with you, friend, not at you. Okay, maybe a little bit at you, but mostly with. Good times.


Content: Some of the humor relates to nursing mom issues.

Stop the Ward I Want to Get Off! (As the Ward Turns #4), by Joni Hilton

2 stars: I was hoping for more.

Andy, Brian, and their 6 children still live with Edith in the mansion, only now there's an added attraction--Edith Land! So, remember the airport llamas? That didn't work out so well, so Edith had to figure out what to do with all those llamas--oh, and the birds that were supposed to train the llamas (by repeating phrases over and over.) Naturally, a petting zoo was the perfect answer. Edith Land just kept growing from there, much to the chagrin of the Taylors.

Meanwhile, Andy continues to try to keep her sanity in a house of craziness, NOT say embarrassing things in front of large groups of people, and put up with children, husband, and Edith. It's a full-time job.

* * * * *
You guys! How did I not know there were 4 of these?! I went to look them up and this one popped up. I ordered it the same day and read it soon after it arrived.

Later...
Perhaps my expectations were too great. It was just okay. Some of the incidents were amusing, but it started to feel a bit forced at times.

So, unless you have to get every book in a series to feel closure in your life, you could do without this last one. I did for all these years.

Content: One of the embarrassing moments here is a misunderstanding where Andy shouts, "No more secs!" to a child, which everyone else hears as "No more sex!" The joke doesn't die for at least a chapter.

Have you read these? What did you think?