As you may have noticed, I love gardening! Now that I’m farming, I still love it! There’s something about working in the dirt that is a little bit like cheap therapy—it definitely calms my soul and lifts my spirits. Then there’s the miracle of a tiny seed sprouting up into a plant that flowers or produces something delicious to eat. As an adult, I enjoy the entire process—the planting, the growing, the weeding and watering, the harvesting. (Ok, ok. Maybe not so much the weeding and watering! Mulch and drip irrigation to the rescue!) 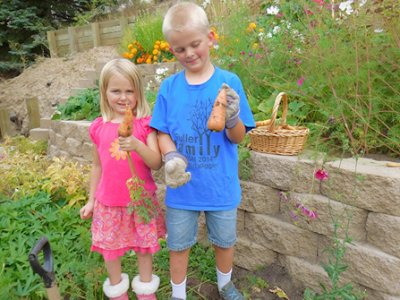 Get a load of those fatty fat carrots!

So how do we get our kids to experience the joys of gardening for themselves? Here’s a hint: I wouldn’t start them off with the stuff that even we don’t like—i.e., the weeding! Not that they can’t learn to help with that, but perhaps with a time limit, or working with you. However, that’s a separate issue. We’re trying to figure out how to lure them in, so that they want to do their own gardening! So that they too, at some point, find it worth it to do the maintenance chores in order to receive the built-in rewards.

You see where I’m headed with this, don’t you? What part of this whole process will they enjoy the most? If you guessed HARVESTING—yes! We have a winner! My little ones—and now, middle-sized ones—are always on the hunt for a snack. Growing delicious things that they can pick and eat while they’re out playing in the yard is a sure winner. Raspberries and strawberries, snap peas, cherry tomatoes, lettuce, spinach—get some food into those hands! They will start to associate gardening with happy, yummy delights. Even the things that need a good washing first can still be fun to harvest together. Potatoes and carrots come to mind here. 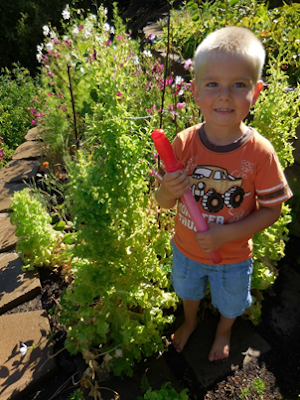 It turned out that none of us really liked the green leaf lettuce. So it bolted!
Yep, that lettuce was taller than he was.

So that’s the first step. Let them pick things out of the garden and eat them. The littles will love it, which then tends to lead to an interest in growing some for themselves. As their interest grows (ha!), carve out a small section of the garden that is “theirs.” It doesn’t have to be big! In fact, it will probably be more successful if it’s small at first. To some extent, let them choose what to plant in their garden, though of course you will probably need to advise them on spacing and timing of the sowing. Work together, if they’ll let you help them; otherwise, stand back and let them go at it! Some things will make it and some won’t—that’s life, and it happens to experienced gardeners too. It can be hard for me to let go of the control, but it has gotten easier over time. It’s not the end of the world if you have carrots growing up in the pea patch.

If they’re not interested in having their own patch, don’t make a big deal about it. Let them help you plant the family vegetables. They won’t have any of “their own” to eat, but as everyone gets to eat the family’s anyway, they can still participate that way. If they start off strong, but lose interest by July—again, don’t make a big issue of it. Let them start helping with the family stuff. Or show them how to pull out their dead pea vines (pulling things up is always fun!) and plant some beans—whether for them or for the family—makes no difference.

As a sidenote: it has been fun to see the differences in my kiddos choices planting their gardens. My daughter always includes flowers in hers (takes after her mama!), where my oldest son is always very focused in on the vegetables that he likes to eat. For my younger son, this is really the first year where  he’s done it all on his own. Like his big brother, so far he has been focused on vegetables, and keeps saying he needs more space. I am encouraging him to keep it smaller! 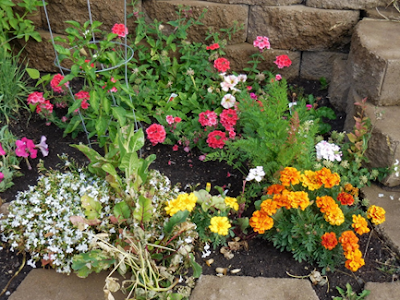 This was my daughter’s garden one year. You can see a few vegetables in there!

Ok, here’s where you may disagree with my methods. When they’re little, I did all the weeding and watering. Now that I have 3 in elementary school, weeding their own patches is strongly encouraged, but I still step in as needed. Maybe once a week, if they have neglected their little patch, I require them to weed it for their daily chore. However, I really want this to be a success for them. I want them to have something to harvest from their garden. If they completely neglect their garden and then everything dies—yes, it’s a life lesson to learn, but what I think they would learn is, “This is stupid. I’m not good at this. I’m not doing it again.” So, I offer to help them, I require it of them somewhat regularly, then at times I just do it for them. I do not tie it to the gain or loss of other rewards like screen time.

This year I have started a whole bunch of tomatoes and peppers to sell. My oldest two wanted to get in on the seed-starting as well, so I got them each one of those little Jiffy peat pellet kits that come with the tray and dome. So they have their own tomatoes and peppers growing in there, along with some cucumbers and watermelons in 4-inch pots. Now to teach them about hardening things off! I am guessing this will require quite a bit of my help as well. Heck, it’s hard for me to remember to take things in and out! 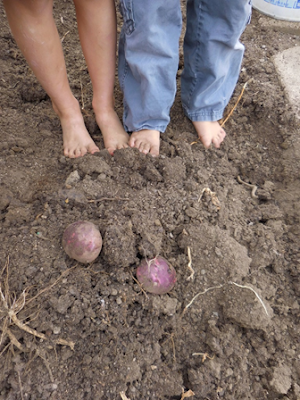 How do you know if it’s working? How about when of your kids says to you, “Anything I pick from the garden always tastes ten times better than store bought.” YEAH! Try not to look too smug as you say, “That is so true!”

I figure, even if they don’t end up loving it like I do, at least they’ll know how to do it. Who knows, maybe the gardening bug will hit later in life!

I’ve got some other tips and ideas for making gardening fun for kids, so stay tuned!