Planting Before the Storm 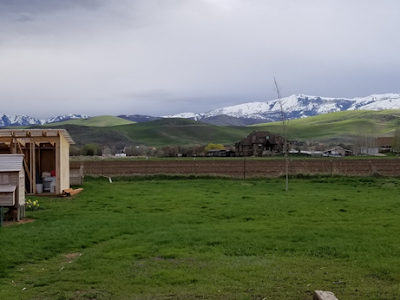 This was the end of April. Still very green out there thanks to all this rain!

We’ve had a rainy, stormy week here at Bluebird Flower Farm. It has rained now for 3 days and is supposed to continue all the way through next week. As I looked at that weather, I knew a couple of things had to happen before all the rain:

So I spent some quality time this week, hoeing, making rows, and chucking seeds in the ground. I’m not kidding—I was literally throwing them down! Last year, I was much more precise with my direct sowing. I had my trowel with the measurements on it (bless my heart), and the ones that needed 6 inches—by golly, I was placing a seed or two every 6 inches! Yes, it took a very long time. Nope, not doing that again. Once again, learning from my failures.

The problem I found doing it that way, was that when germination was spotty—which it was—I ended up with huge gaps in my rows. I reseeded in those gaps, but there was still all kinds of wasted space. Did I mention that it took a very long time?

Here’s what my direct sowing looked like this year: with the hoe, clear any weeds out of the row space. Make a couple of furrows. Water the furrows well. Sprinkle seeds generously down the furrow. Tamp down, covering with dirt if darkness needed for germination. Go on to the next!

I may regret this, but I did not put any labels of any kind marking what I planted. (I did make notes of it once I came inside, but that was more how many rows of what type I did, not bothering to try to describe where I put them.) Last year, I very meticulously used my little plastic labels and marked where I sowed each flower, and even each variety within the row. For one thing, MORE TIME! For another, those little plastic labels got stepped on, broken in half by the hose, and pulled up. In other words, they were generally useless by about halfway through the summer.

I pretty much know what the foliage of the different plants I put in looks like. If I’m not sure, I look it up. I also feel fairly confident now with which seedlings are the weeds. Once they bloom, it should be obvious which variety it is—they were all pretty different from each other. For instance, I did a whole row of white cosmos—I don’t think those will be mistaken for anything else.

My new method will require a lot of thinning. I am bracing myself! It’s hard for me to thin out the plants! Particularly when they’ve done so well and come up and are growing strong. However, thinning is absolutely necessary for the health of the plants. Another plant of the same species can be just as bad as a weed at stealing nutrients and water from the one you want to keep, if they’re too crowded together. I’m reminding myself of this as I go out there this week!

My baby Bells of Ireland, which reseeded themselves so wonderfully need to be thinned. They are looking amazing! I hate to pull out any of them! I will need to harden my heart, though, and just do it. It’s for the greater good! I’ll keep telling myself that. It really is—it’s just—hard to do. I worked so hard last year to get ANY Bells to grow. I will do it, though. After a few more pep talks!

I have found volunteer bachelor’s buttons growing in places they don’t belong in the garden, as well. So far I have successfully transplanted those babies to fill in spaces in my bachelor’s button row. All this rain is helping them survive the transplant job.

I went out and checked today, and here’s what I have coming up so far: buttons, Bells, dill, pennycress, sweet peas, poppies, and California poppies. By the way, I found some poppies growing over between my hyacinths on the side of the greenhouse. I forgot that I had sown some there! So that was a fun surprise. Vegetables so far: spinach and peas.

Planted this week: cosmos (4 varieities), zinnias (5 varieties), rudbeckia (3 varieties), what I had left of the ageratum and statice, parsley, chamomile.

All of those were put in on Thursday. I was really hustling to get them in before the rain started! I also did as much weeding as I could while I was preparing seed beds and planting. I got a decent amount done, but as predicted, the rain is bringing them up all over. You know purslane, “mother of millions?” Yeah, there’s probably a million of those seedlings popping up out there right now. That weed won the war last year, big time. It completely got away from me. I’m using cardboard and weed fabric this year to help keep it at bay, along with lots of hoeing on this front end of the season.

Earlier in the week I bought some perennials from the nursery and got those planted into my flowerbeds. Most of them are varieties that I am growing or have tried to grow this year. So be it. I have realized that my tiny perennial seedlings will probably not bloom until next year at the rate they’re going. So I got 3 pink salvia for the front flowerbeds, 3 ‘Fragrant Angel’ white echinacea that I put in the East side flowerbed, 3 red Jupiter’s Beard—which went into the bed I cleared out around the honeysuckle bush, and 4 lady’s mantle, which went into the front shade bed by the porch.

Yes it was expensive. I think it will be worth it, though, as they begin to produce useable stems this year. These ones that I’m growing will just add to that in future years, assuming I can keep them alive! The perennials I put in last year are doing awesome this year. My perennial bachelor’s buttons in the oval flowerbed are huge! They have probably tripled in size—I was cutting 18” stems from them this week! Last year it was more like 10” stems—and not very many at one time. Same with the catmint I planted last year, and the pincushion flowers. They are big and healthy. Bring on the flowers!

In fact, many of them are doing so well that I may need to move or divide them in the fall, to make some elbow room for the other stuff I have planted in the beds. The alliums will need to be thinned for sure! I am already figuring out where I can put a bunch of them—I think in the back, because the deer won’t bother them. Not only that, when I so blithely scattered seeds last year, little did I know how many babies would pop up! They are all attached to a mini onion-like bulb, so they should be fairly easy to transplant.

I continue to get the flowerbeds weeded and cleared out—one at a time. The problem with accomplishing one garden chore is that I always end up giving myself a few more in the process! I got the front shade beds weeded today, and the lady’s mantle planted in them, but realized that the tulips need to be thinned out. Plus, there were several of the tulips practically sitting on the surface. So I dug up several of the clumps that most needed to be relocated. Alas, I didn’t have time to get them replanted this afternoon. So next week those need to go back in the ground. At least I think I know where I’m going to put them; but of course, it needs to be weeded first. Like I said: finish one chore, end up with 3 more.

I will take a few more pictures tomorrow and get them added, so you can see what I’m talking about.

In the meantime, as the rain comes down all week, I plan to work more on inside stuff. Hey, I rallied the kids this morning and we actually got the kitchen and dining room floors mopped! Situation there was getting pretty desperate. I got some mending done. Amazing what prolonged rain can do!