Lots of Rain, with a Side of Marketing Decisions

It has pretty much been raining all week. Oh, there has been a break in clouds here and there—for a few hours at a time—but all day, all night, RAIN. Wind too. I had my tomatoes and pepper mostly hardened off prior to this week. I went back to bringing them in at night for a couple of nights (lows in the upper ‘30’s), and finally left them outside, but covered them with frost cloth every night. Even left them covered during some of the days. It has just been so cold and rainy. Oh wait—I think I mentioned that.

I told everyone they would be ready this weekend. I decided today to lower my prices, since they are still pretty small. In a normal week, with warm weather, they would put on some good growth. 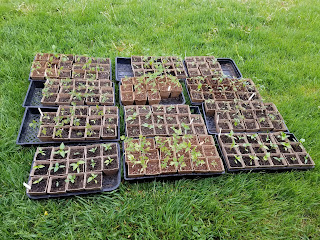 Tomato and pepper starts. This was a week ago, and sadly, they look about the same. It has been too cold and rainy for them to put on any noticeable growth.

So, what does a flower farmer do in the rain? Well, let me see…

I managed to rally the kids and get our kitchen/dining room floor mopped. Go us! Um…caught up on paperwork, to some extent. Made lots of phone calls. I purchased flowers. They were supposed to be some that would go with my own, but I didn’t even get out there and harvest any this week. I know—sad!

I still have the same plants blooming as last week—alliums, perennial bachelor’s buttons, and lilacs. 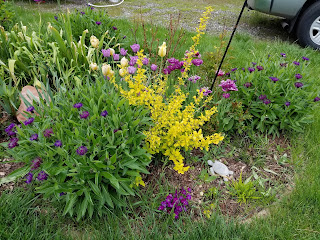 This is in my oval flower bed on the west side. Those bachelor’s buttons have gotten huge! I’m already thinking about moving a couple of them elsewhere—this one in front in particular. It’s gotten so it’s crowding the ninebark.

Yesterday we had a whole afternoon of rain-free weather. There was even some sunshine here and there! I managed to get about 1/3 of my Bells of Ireland thinned and weeded, along with quite a bit of the garden hoed. Also, some other weeding done. So while I was thinning, I left them at roughly 6” apart, for now. They’re supposed to have 9-12” each, according to some sources, but I guess I’ll let them get even bigger before I decide to do that. I can say with a fair amount of confidence, that I will have plenty of Bells this season!

I have also been thinking about and working on marketing a bit. I have a hard time putting myself out there. I am trying to be more active on social media and get over my fear of calling people! Something I’m trying to figure out right now are the “Fresh Flower Fridays” at my Morgan Mercantile booth. Since I started at the beginning of this month, I have sold exactly ZERO arrangements out of there. I have brought anywhere from 3-6 arrangements, always with 2-3 “Grab and Go” bouquets wrapped in paper, and sometimes with smaller/less expensive arrangements in a vase. 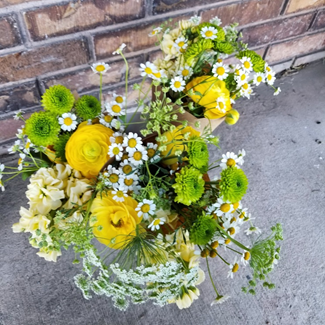 These were my Mother’s Day weekend “Grab and Go” bouquets at the booth (3 shown here.)

I haven’t marketed it as much as I should, so I need to work on that. I don’t think it’s just a marketing issue, though. The store gets plenty of foot traffic, particularly on weekends, which is why I chose Fridays. Yet, no-one buys the flowers. It’s discouraging! I’m trying to decide how long I keep it going with zero results, before spending that time, effort, and product toward a more profitable direction. Maybe I should take those bouquets around to local businesses instead, as a freebie, with my card attached. Or use them to drum up more business subscribers. It’s just such a waste.

The other thought I’ve had is that maybe more people would buy the flowers if there were more of them. However, at zero profit currently, I don’t feel like I can justify stocking the booth with a whole bunch more. I’m thinking next week I need to call the city and ask about setting up a farm stand in front of my house, and putting signage up around town so people find out about it. Perhaps people just don’t expect to see flowers at a vendor booth inside a store, or something. I don’t know. In any case, it’s not working very well right now!

Back to growing things—I have cosmos coming up! Lots of them! I am so glad. Last year I got a total of maybe 4 plants, and they struggled. So at least something is enjoying the rain! Well, something other than the weeds, I mean. Our orchard weeds are about 3 feet tall right now! We let out the chickens to forage and they disappear!

Here’s to some sunshine this weekend, and solutions to all the dilemmas!