I love learning, especially learning more about flowers! The past couple of weeks I have been slowly getting caught up on my backlog of online learning videos. I signed up for Flower Farming School Online, which ran November into December, but fell behind when the December whirlwind came along. So now I’m finally getting to the end of those classes—almost! I have a few more hours left to do, but I’ve done all the main sessions. I’m actually glad I waited until now to take that class. I think if I had taken it back in the beginning, I wouldn’t have even really known what questions to ask.

For some reason, I seem to retain the information better if I have struggle a bit with it on my own, first. I think my brain is more actively engaged in finding answers to my questions and fixing my mistakes that way. I know I have taken all kinds of notes with it, particularly in regards to seed starting. It’s amazing, though, how you can pick up little tricks and things as you go along that you weren’t even looking for.

For instance, in this last session I watched, on Harvesting and Conditioning flowers, the teacher (Lisa Mason Ziegler) demonstrated how to strip the foliage from several different types of flowers—how much she leaves, how much she takes off, basically. So one of her examples was bachelor’s buttons. Now, I have grown bachelor’s buttons for the past 2 years—it is one of the few I have had some consistent success with. 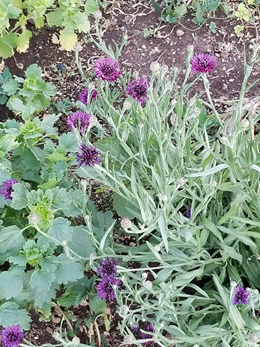 These purple bachelor’s buttons were volunteers that came up this spring. (Bells of Ireland on the left.)

However, it is a pain in the neck to harvest! I would put it off and leave it for last, because with the side shoots, stripping off the leaves seemed to take forever and they still would get all tangled up in the bucket! Guess what Lisa did? She cut off every single side shoot and all the leaves, leaving the one lonely little flower at the top! Wow, that really gave me something to think about! That would save a ton of time, and they are so prolific, that I could probably still get enough volume to be useful doing it that way. Even if not, I could save all the longest side shoots and strip them the same way, so I would have a single flower on a single stem.

In the picture above, there are several flowers already too old to use—they’re the ones that are a darker purple than the rest. Procrastination just makes your job harder. (I knew this already, but this picture is proof.) If you don’t keep a bed harvested, they start to get away from you, and then you have to hunt and peck to find any useable stems. So having a new way presented to me that would save me all that time and frustration? I’m going to take it and run with it! One flower, one stem on buttons. Ready, go!

See what I mean? I wasn’t going in to the class wondering how to save time prepping bachelor’s buttons, but there you go—a hidden gem.

There have been several “aha” moments like that throughout the class. I feel like it has been well worth the money spent on it. I understand succession planting better than I ever have. Also, I’m really wondering if my seedlings haven’t done very well the past 2 years because the dining room is too cold. I have been thinking about ways to make them a little warming chamber or something to keep the heat up in the 70’s. Another little bit of information that she had mentioned in one of the videos.

If you do what you’ve always done you’re going to keep getting the results you’ve always gotten, right? I feel like I had respectable germination rates last year, but then my seedlings just sat there in the trays and didn’t grow for a very long time. Then also, I tended to kill them off in the hardening off process. But maybe if I had much bigger, healthier transplants going into the hardening off they wouldn’t be so fragile. 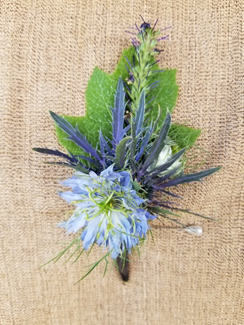 On the Floral Design side of things, I have really wanted to get better at my personal flower skills. You know, corsages, boutonnieres, crowns, etc. The one lady I know of who is a rock star in the world of wearable flowers calls herself "Passionflower Sue” online. Anyway, she teaches courses! She has tutorials, but you have to pay for them, of course. For a long time, the only option was to pay $1000 to get full access to all her stuff. I just couldn’t spend that much! Several months ago, she came up with a monthly payment system. It is only $37 per month! Well, that’s definitely within my budget!

I have been signed up for it for 2 months now, but December came along.… (see notes above re: Christmas whirlwind.) So just today I have finally taken the time to sit down and listen to some of her tutorials. They are amazing! I have already learned so much about wiring flowers! Again, something I have struggled with on my own for the past 2 years now. In just a couple of 20 minute videos I learned game-changing techniques that are going to make my boutonnieres and corsages so much better! In fact, I’m excited to have a high school dance coming up in a week so that I can practice my new skills!

The more I learn, the more there is to learn…and I love that! Give me all the lessons! I feel like every class I take bumps me up to another plateau. From my new height, I try things out, succeed and struggle, until I’m in a place where I’m ready to add the next piece to the puzzle. Then up I climb again to a new plateau.

Who are you inspired by? What have you learned lately? I’m all ears!