It's a Jungle in Here! 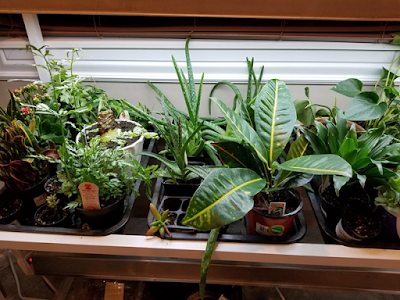 I have started putting together planters this past week. I had one order, then 2 more came in. So I have spent some quality time purchasing various houseplants to put together into planters for my customers. It’s fun! Also, I may have purchased one or two for myself (cough, cough).

There were 2 maidenhair ferns that were just begging to be rescued from the Clearance shelves, which I did. They are getting some TLC now, in hopes that they will revive and live long! No, they’re not going into the planters just yet. I’ve never been great at keeping houseplants alive, so only paying a dollar or two for them helps with the guilt a little bit. Hey, I do try. So who knows? Maybe they will do great this time! One is upstairs on my bathroom windowsill and one is down here under the lights.

My first planter had a mini orchid in it, 1 dracaena, and one maidenhair fern (a healthy one.) It was pretty, if I do say so myself! I’m going to do a very similar one for someone else—and I even was able to find the same orchid, which is what she wanted. Woohoo!

The other planter will have red anthurium, a small croton with red in the leaves, and either a silverleaf fern or possibly some ivy. I’ve just got to double check and make sure they all have similar care requirements.

Hey, by the way—I found out today amidst my wanderings that Home Depot and Lowe’s use the same supplier for their houseplants. How about that? And for the most part, Home Depot was cheaper, but Lowe’s had a better selection.

I also have 11 amaryllis potted up now. I opened up the gift boxes I had in my booth for sale. It stays pretty warm in the store, so I wanted to see what the amaryllis were doing. Sure enough, 1 of them had a 6 inch long bud and stalk, all white from lack of lights and growing sideways up against the side of the box. Another couple had buds just coming. So the 3 that were already growing in the boxes, I brought home and potted up. Plus I FINALLY got the rest of mine potted up that I had ordered back in November. They were all growing crazy directions, too. In fact, one of them was blooming—barely poking out of the burlap sack it came in! I’ve got 2 more of those almost ready to bloom.

Not to mention all my anthurium from last year that I’m trying to keep alive with varying degrees of success, and all the aloe vera plants left from my sale last spring. I would love to have some houseplants with pretty leaves that I could add to arrangements. Think how pretty the ivy would be! Just have to keep the blessed things alive.

What houseplant tips do you have for me? I’m all ears!

If you want a planter, let me know! They’re fun to make and then you get to take care of them!