The past couple of weeks have been very full.

I’ll start with some happy news: I received my first customer from my Google listing! Woohoo! That was exciting, and I was more than happy to make an arrangement for them. I had to go buy more flowers to have enough, but it was great! 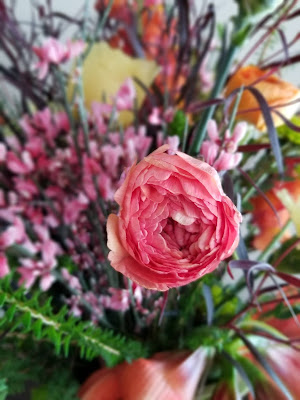 This ranunculus was so very gorgeous! Man alive, I need to plant some this year!

Then, thanks to my husband coming home early one from work one night, I was able to drive down to Pleasant Grove, Utah, to Snuck Farm and attend the Utah Cut Flower Farmer Association meeting. That was such a great night! It was so energizing to be around like-minded people, to see friends I met at the first meeting last summer and make some new ones.

Plus, the topic was just what I’ve been looking for: NUMBERS. In other words, knowing my numbers as a business. What is my profit? What are my margins? What is my breakeven point? All of these things that I currently don’t know. We were given a basic overview of a specialized spreadsheet to figure this all out—the “breakeven” sheet—and even given a free copy of it via email to use.

Since the beginning of my business, cash flow has been an interesting struggle. As the old saying goes, “It takes money to make money.” Well, that’s certainly true when you have to purchase products in order to fulfill orders that come in. So, essentially, you have to already have a portion of the money in your bank account, in order to pay for the stuff so that you can make the money. I keep falling short beforehand. So I plan to get to work right away on this spreadsheet and see how I can help myself do better in those areas. 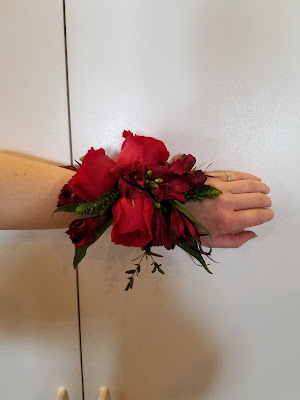 Now let’s talk about dance flowers. I finally called the high school and just asked when their dances were going to be, since that information is nowhere to be found online. I learned that there was a Sweetheart’s Dance on Feb. 1. Yes, last weekend. I purchased some floral supplies that I’ve needed for quite some time, and I watched several online tutorials, and then I put myself out there and advertised on a local Facebook page. I had made boutonnieres before, and silk corsages, but not fresh flower corsages yet.

I received 2 responses from that, plus a repeat customer from before. When I first saw that DM pop up on my screen, my heart was pounding so hard. Why was this so scary?! I don’t know, but it really was! I ended up with 3 couples that bought both a corsage and a boutonniere from me. I gave them a discount if both were purchased through me. So 3 corsages, 3 bouts. Ready, steady go!

I knew that the day of, Saturday, was going to be quite a busy day because 2 of my kids had basketball games in the morning. So I knew I wouldn’t be home to even get started until 11am or so. I prepped the flowers the night before, using Sue McCleary’s hydration chamber technique.

Saturday came, we got home from basketball, and I started making flowers. I used Oasis Floral Adhesive, which is obnoxious. It was my first time using it, and there was a bit of a learning curve. It’s a lot like rubber cement—in fumes output as well as habit. The bouts were wired and taped the traditional way.

I had staggered pickup times, to give myself some leeway for getting each thing done. The problem was that one customer had ordered both items and so needed them both done at the same time. (Everything else had separate pickups.) I had done all the corsages first and was just starting in on the boutonnieres when she came to the door. That was when I realized my mistake.

I had to tell her that the boutonniere wasn’t done yet. It was awkward. She was super nice about it and said it was no big deal, and she would come back in a couple of hours. I even offered to drive it over to her as soon as I finished it, which she refused. Then I found out that she just lived up the street from me, so I felt a tiny bit better. Still, though—fail! If you tell someone it will be done at a certain time, it needs to be done by that time! Also, realization #2: I didn’t have a phone number for her to let her know in advance that it was going to take longer than anticipated. She and I had only interacted via IM online.

That was stressful. The middle pickups all went off fine. Then my last one came and I actually wasn’t quite done with that one either! Luckily, she’s a personal friend and was also very kind about it. It still added some stress, though to have to tell another person to come back later! I was going from one to the next nonstop, but it was taking longer than I had planned on. I was also a bit worried that with the glue, some of the flowers might fall off. They all seemed stable by the time I was finished with them, but that would have been bad to have this corsage that you just paid for start to lose flowers. Last week, I finally got up my courage and asked a few customers directly if their corsage had lost any flowers. The 2/3 I talked to, said they hadn’t. So that was a relief.

One reason I didn’t post last week was because I was still kind of coming down from the stress a little bit. It was still too recent. Actually making the corsages was fine—except for the annoying glue—but yeah, the timing. That was the kicker.

Here’s what I will do differently next time:

Some great experiences that filled me up, and a bit of struggle, which led to some good learning experiences. Definitely a net gain overall.

Then just a few days later, I made 9 mini corsages for the Daddy-Daughter dance at the school. Two of those were for my own cute girls. In fact, my 10 year old made hers with just a little assistance from me. 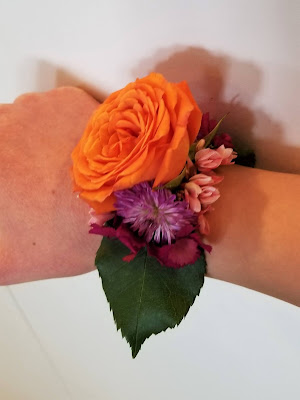 I think she did a great job! For those I was on the ball with my timing for the prep work (hydrating/ conditioning) and was able to make them the day before. Much, much better. Still not loving the floral glue, but I was able to get online (good old YouTube) and find some good tips that should help me have a better experience with it next time. I hope.

This coming week I will be doing Valentine’s flowers! So excited for those!